The job’s not over until the paperwork is done. Done correctly.

When an accident occurs on one of your vessels, an accident investigation is necessary. As safety is our primary concern, it is important to determine what happened, how it happened and how we can prevent it from happening in the future. Although determining how to prevent a future accident is important, it is also important to be responsible while generating documents as the process unfolds.  These investigative documents will also be used by the injured employee’s legal team to prove liability for the injured worker. You can create a safer workplace while reducing your claim exposure by developing a plan to ensure that the documents generated during the investigative process are helpful in preventing a future accident while preserving the company’s ability to defend a claim against an injured party.

The Accident Report
The first document generated following an incident is usually a simple accident report. This report is often prepared by the vessel crew and briefly describes the specifics of the incident. Accident reports are an important first step in notifying management that an incident occurred. The submission of a report usually starts the investigative and claims processes. As these forms are usually filled out by the vessel crew, it is important to train the crew how to properly complete the forms. A simple accident report should provide information regarding when the incident occurred, generally what happened, the time of the incident and a listing of witnesses to the incident. Once this information is sent to the office, the claims department will have all of the information that it needs to begin processing the claim and the safety and operations departments will have all of the information that they need to begin the investigative process. As this document is prepared by the vessel crew immediately after an incident, it should not include any conclusions as to the cause of the incident. There are many factors that will be considered by the post incident investigative team that are not obvious to the crew immediately after the incident.

The Advent of E-Mail
Another form of communication that can cause issues for a company is the exchange of texts or E-mails during the process of investigating the incident. Prior to the advent of E-mail communication, company employees were able to discuss potential causes of an incident by talking about them. If one of the ideas mentioned by an employee was found to be inaccurate, that theory was discounted and never recorded in writing. However, with the advent of E-mail communication, any comment that an employee may make about a potential cause of an incident will be immediately recorded, preserved and available for review by the claimant’s legal team.
Although there may be a series of E-mails, following such an E-mail that debunk the theories included in that E-mail, the cross examination testimony taken from the employee who wrote it may be damaging to the company. Essentially, the damage is caused when plaintiff’s counsel asks, “So, as of a certain date, you believed that the cause of the accident was…” Unfortunately, the only answer, as it is preserved in writing, will be a resounding yes. The jury may never listen to the explanation as to why he was incorrect at that particular time, especially if the theory tracks the liability theory pursued by the claimant.
Thus, it is very important to train all employees, both vessel and land based, that anything that they place in an E-mail or a text message could be taken out of context and used against the company. Therefore, it is important not to draw any premature conclusions about the cause of an accident while communicating with co-workers via text or E-mail.

Root Cause Analysis
Many companies use a “root cause analysis” as an investigative tool.  These safety programs provide an investigative framework where the cause of an incident can be determined. Although such a systemic approach is a great process for determining what could have caused an accident, it also has limitations as it is process oriented. Also, some programs, and many operators mandate, that this process be done without taking into account the fault of the injured employee. Although eliminating employee error as a potential cause of an incident could make operations more “dummy proof” and a bit safer, it does not fit in with the reality of how a particular incident occurred. In reality, many incidents are caused by employee negligence and not the fault of the employer.
Thus, it is important to look at the program being used by your company to determine if it is providing you with an accurate assessment of what caused an accident. If you are working for an operator that mandates that employee negligence not be considered, make sure that you add a footnote to the report indicating that the investigation did not take into account the employee’s behavior. As such, if the report is being used against you later, you can point to the footnote to explain the conclusions.
Another document that often causes companies problems is a report often referred to as a “subsequent remedial measure report.” This report usually pinpoints the cause of the accident and makes a recommendation as to how this type of accident may be avoided in the future. Although subsequent remedial measures are not admissible during trial, they are often discoverable as they are usually nothing more than an accident report with conclusions. As such, the recommendations made in this report may provide a roadmap to opposing counsel as to how to prove liability.
For example, assume that an employee fell from height and the investigation determined that the injured employee would not have been hurt had he been using a fall arrest system. A subsequent remedial measure mandating that employees working at height must use a fall arrest system may not be admissible at trial. However, claimant’s counsel could still ask the question, “Would it have been possible, at the time of this accident, to use a fall restraint system to avoid this type of accident?” Thus, if this recommendation is made in a non-admissible, but discoverable, subsequent remedial measure report, the damage has been done. As such, it is important to look at how a subsequent remedial measure report is prepared and properly evaluate the conclusions that it draws prior to putting it in writing.

Witness Statements
The last documents that are usually generated as a result of this investigative process are witness statements. The cases regarding the discoverability of witness statements are not clear and the issue of whether you must produce witness statements tends to be decided on a case by case basis. The court usually examines when was the statement was taken and who took the statement to determine whether the statement is protected from disclosure. The highest level of protection goes to witness statements that are taken by the company’s lawyers after they have had an opportunity to conduct an investigation and determine a legal strategy for defending the claim. These statements are usually protected as attorney-client privilege and material prepared in anticipation of litigation.
The least protected statements are witness statements taken by crew members aboard the vessel immediately after an accident. It is safe to assume that these witness statements, which are often written in the crew member’s own handwriting, are almost always going to be produced. Falling in the middle are witness statements taken by investigators or insurance adjusters sometime after the accident. It is also important to note that statements taken of the injured employee are always discoverable and will always be turned over to the injured employee when the discovery process begins. Also, any witness who provided a statement is entitled to receive a copy of his statement regardless of who took it.
Considering that any statement may have to be produced to the other side, it is important that the statement be taken with an understanding that it could be produced during the litigation process and that anything included in the statement could harm the company’s defense to the action. As such, any employees taking statements of crew members should be trained on how to properly prepare a statement to help lock down positive witness testimony.
Unfortunately, incidents occur during the normal course of operating a company. There is a balancing act between protecting the company’s ability to defend a claim brought by an injured employee, determining the cause of the incident and preventing it from happening again. Developing a plan and training employees is the key to the efficient execution of such an investigative plan. A little time spent developing a plan can create an environment where the cause of an accident can be determined, future accidents can be avoided and the company is provided an adequate opportunity to defend itself from any potential claims. 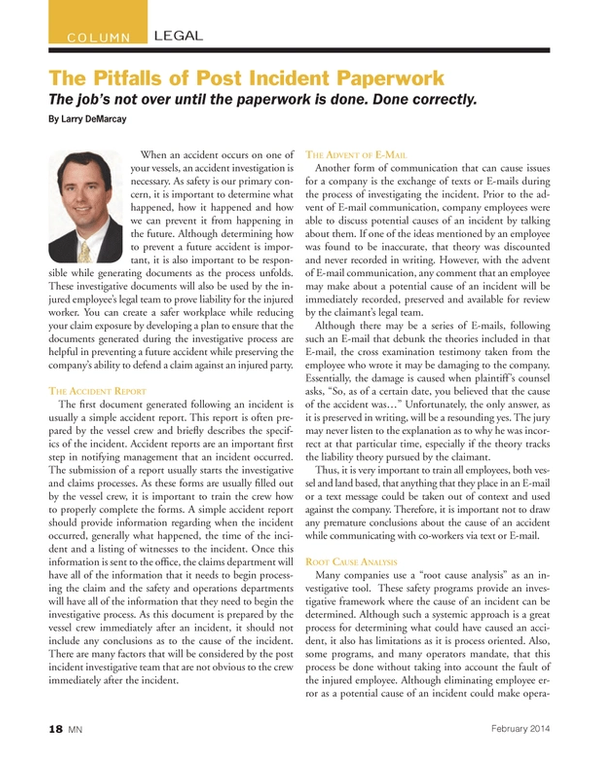