The Company:
Bouchard Transportation’s history dates back to its incorporation in 1918 by founder, Capt. Fred Bouchard, the youngest tugboat captain in the Port of New York. Bouchard is a family owned business and the nation’s largest independently-owned ocean-going petroleum barge company. The company’s areas of operation span all four coasts of the United States: East, Gulf, West and Great Lakes. The fleet consists of 25 barges ranging from 25,000 to 252,000 barrels and 21 tugs ranging from 3,000 to 10,000 horsepower.

The Case:
Through the years, two things remain constant at Bouchard: a commitment to customers, and a strong corporate identity founded on a legacy of barging experience and a fervent family pride. Bouchard Transportation has long been recognized for their unrelenting commitment to safety and education in the maritime industry. This year, and when the only simulator in the Northeast was relocated, Mr. Bouchard funded a state-of-the-art Tug & Barge Simulation Center at SUNY Maritime College which notably boasts the latest in Kongsberg Polaris Bridge simulation technology. While increased regulations and modern technological advances have impacted some operators, Bouchard remains a leader in both its application of these advancements, but also its greater commitment to the petroleum industry. Recent additions to the Bouchard fleet have made the collective equipment faster, larger and better equipped than ever before. Bouchard earned 39 Jones F. Devlin Awards and 43 Certificates of Environmental Achievement in 2015. American Maritime Safety, Inc. awarded the company its 2014 Tug & Barge Safety Award. 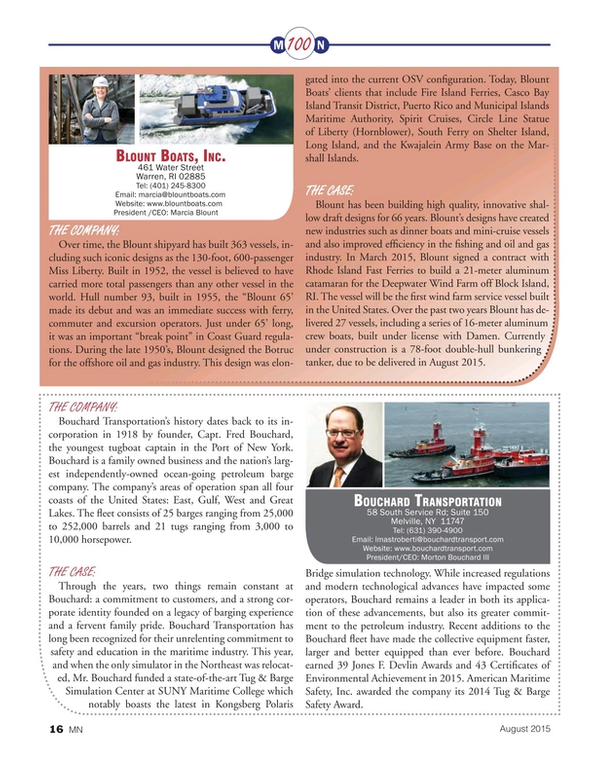