The Company:
Amtech specializes in ship design integration and construction supervision dealing with new propulsion technologies, niche trades and operational efficiencies. Its South Korea office and staff have delivered over 250 ships and the U.S. offices are well versed in U.S. construction, Jones Act applications and the domestic workboat markets.

The Case:
Amtech boasts $450 million of ships under construction in Korea until 2017. Closer to home, the company has successfully delivered the first lithium battery Hybrid Propulsion Research Vessel and has followed with the construction supervision and design integration of the first LNG bunker barge. The hybrid propulsion system developed by Northern Lights, BAE Hybrid Systems and Corvus Energy was introduced due to a request to reduce emissions and fuel consumption along with providing a quieter platform for collecting data and teaching. Built at Robert E. Derecktor shipyard in Mamaroneck, New York, the Spirit of the Sound is used to collect water samples and track marine life in Long Island Sound. The actual “noise” benefit of the silent propulsion system was not realized until sea trials were conducted and schools of fish and other marine life surrounded the vessel during its movements in and out of the harbor, without machinery noise or wake. 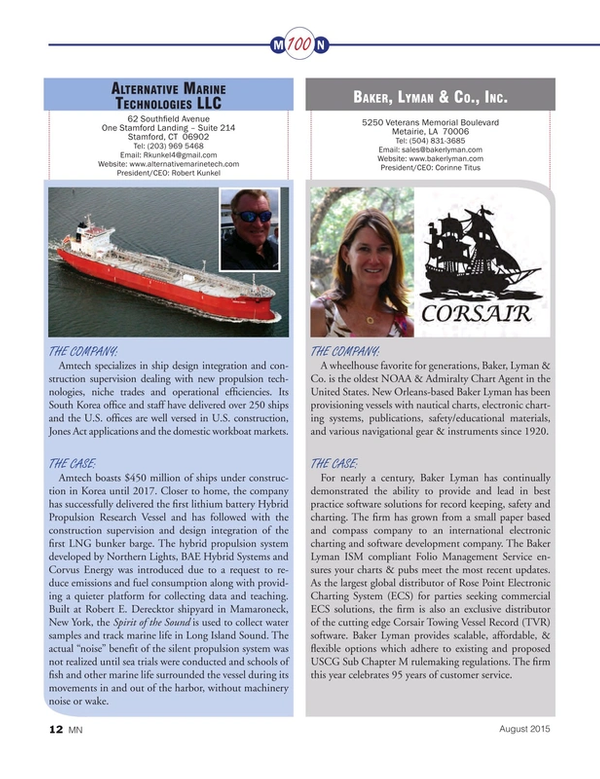