The Company:
FloScan is a Seattle-based corporation that designs and manufactures its products in the United States. With worldwide sales at an all-time high, FloScan Fuel Monitoring Systems are in use on a wide range of diesel powered commercial vessels on every continent including ocean-going, harbor and inland tugs; oil rig platforms, research and fishing vessels.

The Case:
FloScan is a world leader in marine fuel monitoring systems and software applications for diesel engines up to 6000 HP. The firm offers solutions to improve fuel efficiency, reduce operating overhead, and simplify fuel tracking for individual vessels or across entire commercial fleets. In the United States, FloScan is in the process of providing FloNET systems for the entire 68 vessel fleet of inland and offshore tugs operated by Enterprise Marine based in Houma, LA. After beta testing Floscan’s most advanced system with Geo-Fencing capabilities and gauging the compatibility of DataLog Software with their fleet operations software, the FloScan systems were approved for the entire fleet. DataLog provides vessel fuel usage by engine and total, flow rates and temperature, fuel efficiency, GPS data and engine RPM. This data can be downloaded and sent via e-mail as an attached file to operations headquarters. The most recent advancement for inland fleet operators is the addition of a Geo-Fencing feature that tracks propulsion fuel consumed through various geographic areas for federal tax reporting purposes. 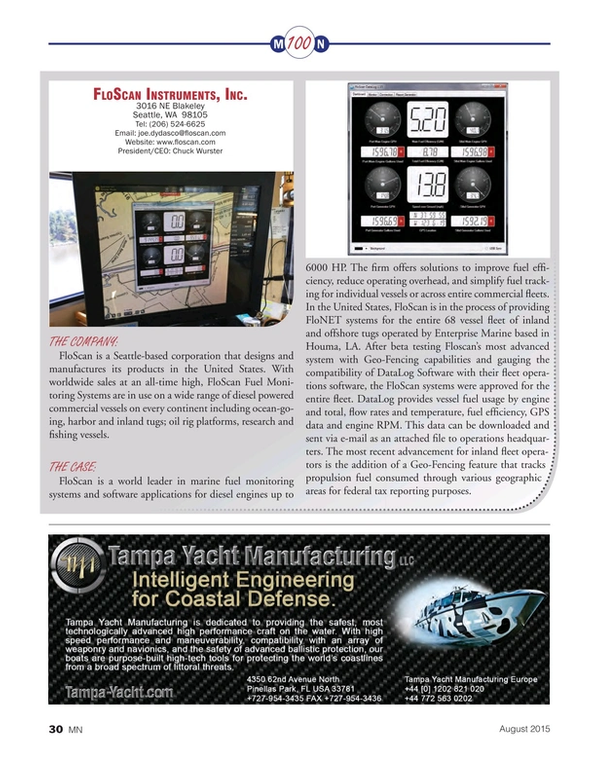