The Company:
Foss Maritime Company is wholly owned by Saltchuk Resources, a privately owned family investment company formed in 1982 and based in the Pacific Northwest. Saltchuk has over $2 billion of assets invested in numerous operating companies in several different business groups, including deep water shipping logistics, ship management, tug and barge operations, fuel distribution and trucking. Foss regularly partners with its sister companies in the Saltchuk portfolio to offer a diverse range of maritime transportation services.

The Case:
Evolving from a single rowboat into a leading marine transportation and harbor services company, Foss last year celebrated its 125th anniversary. Founded in 1889, it now serves customers around the world, operating more than 130 vessels and continues to pursue growth opportunities in a variety of areas, such as expanding its scope of services and clients in Alaska and the Arctic. For more than a century, Foss Maritime has helped set the standard for marine transportation with leading edge technology, engineering and shipbuilding. The company’s Seattle shipyard expanded into new-vessel construction in early 2014, and today employment at Foss Seattle shipyard is larger than ever with about 265 welders, electricians, carpenters and other craftsmen. But, at Foss, safety is every bit as important as numbers. This year, the Chamber of Shipping of America (CSA) recognized 75 Foss Maritime vessels with the 2014 Jones F. Devlin award for outstanding safety records.

The award is given to self-propelled merchant vessels that have operated for two full years or more without a crewmember losing a full turn at watch because of an occupational injury. Altogether, the Foss vessels achieved the equivalent of 529 years of incident-free operation. Sixty-three vessels had five or more years, and ten vessels boasted 10 to 21 years without a lost-time injury.

New Fleet Additions:
Just recently, the first of three Arctic Class tugs being built at the Foss Rainier, Ore., shipyard was christened. The vessel, the Michele Foss, will see its first assignment on an oil field sealift this summer from South Korea to the Alaskan Arctic. With this event and the two vessels that will follow, Foss solidifies its position as a major workboat player in this important market. The vessel’s namesake is Michele Seaver, one of the three sisters who are primary shareholders of Saltchuk, the parent company of Foss Maritime. The Michele Foss is ice class D0. This means the hulls are designed specifically for polar waters and are reinforced to maneuver in ice. The vessel complies with the requirements in the ABS Guide for Building and Classing Vessels Intended to Operate in Polar Waters, including ABS A1 standards, SOLAS and Green Passport. The new vessel’s equipment includes a Caterpillar C280-8 main engine, which complies with the highest federal environmental standards; a Nautican propulsion system; and Reintjes reduction gears. Markey Machinery supplied the tow winch. The tug has a bollard pull of 221,000 pounds. The Michele Foss has been designed to withstand the rigors of Arctic operations and is suited to work across the globe as Foss competes for opportunities in the oil and gas industry. 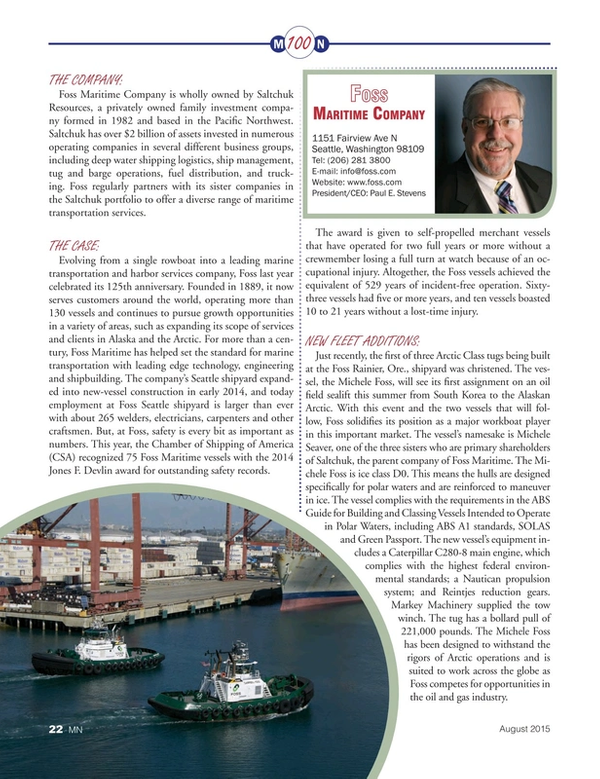