AEP River Operations offers the largest covered hopper fleet of any carrier. Complementing its barge operations is a fleet of over 80 boats ranging in power from  1,550 to 11,000 hp.

The Company:
Headquartered in St. Louis, Missouri, AEP River Operations is a barge company offering service in the transportation of dry bulk commodities – grain, project cargo, coal, steel, ores and other bulk products – throughout the inland river system. AEP River Operations offers the largest covered hopper fleet of any carrier. Complementing its barge operations is a fleet of over 80 boats ranging in horsepower from 1,550 hp fleet boats to lower river big tow 11,000 hp boats. In March of this year, the firm served notice that, while it was pleased with the performance and quality of its current operations, the inland giant also had its eye firmly on the future. Today, AEP is exploring strategic alternatives for its barge transportation unit, transitioning to a more diversified fleet that provides for new ways to make money on the river. In 2014, AEP moved over 69 million tons of cargo for its customers.

The Case:
AEP is a Responsible Carrier Program (RCP)-certified company with a mission and focus to be the leading supplier of safe, competitively priced marine transportation to its customers. Notably, and on January 1, 2015, AEP River Operations announced that it had successfully completed two calendar years without an environmental spill.
Beyond this, AEP River Operations has taken delivery of 40 newly constructed 10,000 barrel tank barges. Shippers looking to transport liquid products now have AEP River Operations as a viable alternative service provider in the liquid freight market. The new tank barges will exceed applicable safety and equipment standards on the water today. Beyond the Tier III John Deere engines, the barges are built with 6.4 pound pressure tank tops with the Superac High Velocity, 6 PSI pressure relief valves which will provide a greater degree of safety in the event of overpressure. Several stages of safety coverage against spills provide maximum redundancy in the form of high level alarms, high level shut downs, gauge trees, and overflow through PV valve into the containment space on the tank top.
Ramping up for the handling of liquid cargoes required training and education of AEP’s entire workforce. Already, more 1,000 employees have been trained over the course of the past eight months and the firm expects to complete the process very shortly. Using a combination of third-party and in-house trainers, different layers of awareness training and 40-hour Hazwoper sessions were held. With the help of a third-party vendor, cargo transfer procedures, ballasting and Vessel Response Plans were formulated in accordance with U.S. Coast Guard requirements. 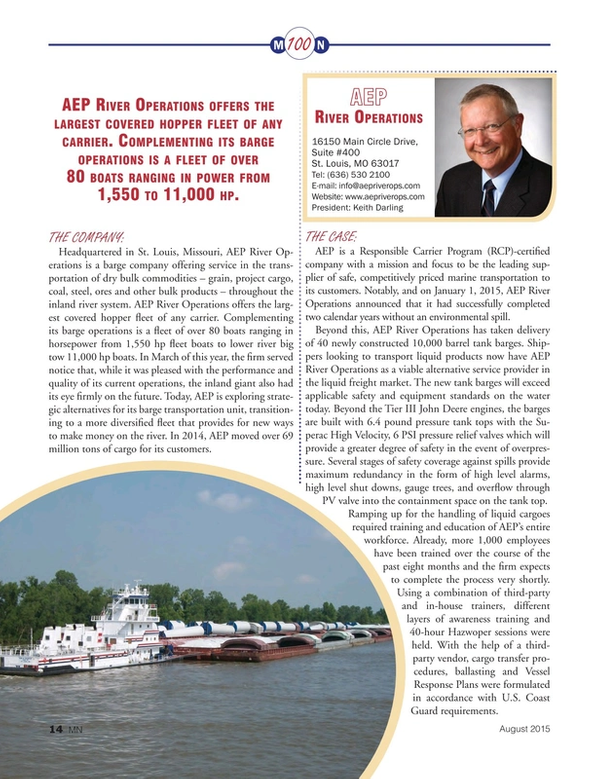