Today’s workboat operators must navigate increasingly stringent IMO and EPA environmental and emissions regulations in and around ports and rivers. As the drama unfolds, selective catalytic reduction or SCR is emerging as a viable vehicle to do just that. At the same time, fears about space constraints for smaller vessels and the hassle of carrying and handing urea for these systems are rapidly evaporating, as well.

Two different firms – both familiar names in propulsion markets – have embraced SCR as the way forward. Both, Tenneco and Volvo Penta, rely on deep roots in these markets and significant experience in the effort to reduce emissions from engines. For its part, Volvo Penta is a recognized stakeholder in the marine propulsion markets, while Tenneco is widely known for its deep roots in emissions reduction in the automotive sector. It now brings that expertise to the water, just in time for workboat operators thirsting for a compact, effective and class-approved solution.

Tenneco SCR
Already a leading global supplier of Clean Air aftertreatment technologies in other sectors, Tenneco was in July awarded three product design assessment (PDA) certificates from the American Bureau of Shipping for its new selective catalytic reduction (SCR) system for large engines. That said; Tenneco’s SCR solution is already out on the water, performing as advertised, on not one but two workboat hulls.

Tim Jackson, Tenneco’s head of Technology, told MarineNews, “Tenneco’s core business in clean air technologies began in 1975 with light vehicle solutions for the passenger car and light truck market. We expanded to commercial trucks in 2004, and by 2010, developed our first SCR systems for locomotives and for off-highway equipment. In 2012 we developed our first marine and stationary power systems and in 2014 launched our first complete marine SCR aftertreatment system.”  Beyond this says Jackson, Tenneco is working to provide solutions for our customers to meet future regulations such as EU Stage 5.”

In the past year, field tests were conducted on a 224 foot Great Lakes training vessel powered by four 800 horsepower, circa 1984 Tier 0 engines.

In a series of validation tests, including the ISO 8178 E2 cycle, when one of the engines was outfitted with the aftertreatment system, the engine met all criteria for IMO Tier III including NOx and SOx. In 2015, additional field tests are currently underway on the sister vessel – the training vessel of the Texas Maritime Academy, powered by the same type of engines. Initial testing produced results which meet EPA Tier IV emission levels. In August, MarineNews traveled to the Texas A&M Maritime Academy in Galveston, TX to see the installation up close, and talk with company officials about the results.

The SCR system’s modular design enables seamless integration for a broad range of engine sizes and works with electrically or mechanically controlled engines. In two retrofit installations – both in enginerooms with limited physical room – the system has been proven in a wide array of installation options.  Better known in automotive markets, Lake Forest, IL-based Tenneco is nevertheless one of the world’s largest designers, manufacturers and marketers of clean air products for automotive and commercial vehicle original equipment markets and the aftermarket.

At Texas A&M, similar to its earlier successes at the Great Lakes Maritime Academy, Tenneco’s SCR solution is helping the school meet new emissions regulations. Both the TS General Rudder, which is operated by the Maritime Academy and its Great Lakes sister vessel employ 33-year old 800 horsepower, Tier 0 engines. The Tenneco solution has been demonstrated to keep both engines compliant with today’s stringent EPA Tier IV marine emission requirements under all operational conditions.

Because space is at a premium on workboats, Tenneco leveraged its packaging expertise in passenger car and commercial vehicle aftertreatment systems to develop a highly compact and flexible system for the large engine marine market. Indeed, Tenneco’s large engine SCR can be integrated into a variety of engine designs. Jackson adds, “Our SCR Reactor can be installed vertically or horizontally in-line with existing engine exhaust piping. The dosing control system is compact and can be mounted in a variety of locations. Urea pump supports flows of up to 120 meters, which enables a range of installation options for urea storage.”

Ideal for newbuild tonnage, the modular system is compact and can be integrated with a variety of engines, engine room configurations and retrofits. According to Jackson, installation is straightforward and can be completed as part of a planned maintenance update. And, he says, additional validation testing is underway in Asia and Europe, and the system is currently being validated with marine and large engine customers.

Urea consumption – always a concern and an expense for any operator – depends on a number of factors including engine configuration, the level of NOx reduction required and duty cycle, but a good rule of thumb is urea consumption of approximately 3-5% of fuel consumption. The urea is completely consumed in the aftertreatment process, so there is nothing to be disposed.

Commenting on the cost of the urea, Jackson insists, “Urea consumption is a small fraction of fuel consumption. Also, the use of SCR to meet emissions requirements versus exhaust gas recirculation (EGR) technology typically allows the engine to be tuned for lower fuel consumption, so urea consumption and cost can often be offset with fuel savings.

Tenneco’s Jackson sees a bright future for SCR on the water. “We see broad application for our SCR system in the workboat market including push boats, tugs, pilot boats, offshore support vessels, rescue vessels, dredges and commercial fishing boats as well as offshore drilling rigs themselves.” And, he adds, “We bring decades of integration and packaging experience to every marine engine application we design. The result is an SCR aftertreatment system that is easy to install, economical to use, and simple to maintain.”

Volvo Penta of the Americas
Volvo Penta’s strategy for emissions control in marine diesel engines, as it applies to its power range of high-speed commercial marine diesel applications (less than 600KW), also involves Selective Catalytic Reduction. Citing reliability and the lowest total cost of ownership, Ron Huibers, President, Volvo Penta of the Americas, adds, “We have determined that this is the best solution for its ability to reduce emissions to meet the most stringent current and projected regulations in North America and internationally.”

Actually, says, Huibers, the Volvo Group was one of the pioneers with SCR technology, dating back to 2005. And like Tenneco, Volvo has many years of experience in deploying SCR on trucks, buses and offroad vehicles – as well as marine vessels - with proven SCR technology that meets the world’s toughest emission standards. According to Huibers, SCR allows Volvo to sustain high power outputs without performance compromises. Beyond, he says, “Our SCR solution allows us to meet emission requirements without an additional diesel particulate filter (DPF).”

Committed to SCR, Volvo Penta is also teaming with STT Emtec in repowering some 50 sightseeing canal boats in Amsterdam to achieve the goal of zero emissions. In this case, however, the Volvo Penta D5A TA engines were fitted with a marine exhaust gas recirculation (EGR) solution that reduces NOx by diluting the charge air with recirculated exhaust gas. Using the system, the engine’s carbon monoxide, hydrocarbon and carbon particle emissions are reduced by up to 60 percent and NOx emissions by up to 45 percent. The system has not yet been deployed in North America, but Volvo Penta will respond to requests, if the market evolves.

Here in the United States, Volvo Penta’s range of commercial marine diesels are less than 600 KW and meet EPA Tier 3 without SCR. And Volvo says that to retrofit SCR on its existing uncatalyzed engines is not yet practical. In other markets, Volvo has employed EGR in combination with SCR, specifically in their on-highway US EPA 2010 rule and offroad market, Tier 4 Final.

Like Tenneco, Volvo Penta is carefully looking at the limited engineroom space on workboats. Huibers explains, “While EGR is slightly smaller in installation, SCR makes it possible for us to keep our high power outputs and is better suited to take care of the high sulfur contents of marine diesel. We are targeting to reduce the physical dimensions of our SCR solution by 30-50 percent in the future.”

Like Tenneco, Volvo Penta puts urea consumption at roughly 3 percent of annual fuel consumption, depending on the duty cycle. Huibers adds, “We are optimizing our engines and urea dosing strategies to make the end result cost neutral to the user when it comes to urea and fuel versus EPA Tier 3 levels.”

Different boats, Different Longsplices
Every situation and business case is different. U.S. EPA Tier IV regulations apply to new vessels, and the costs and benefits of engine configuration and aftertreatment should be taken into consideration based on the operators’ individual needs. The U.S. EPA Tier IV regulation requiring NOx reduction started in 2014. Notably, Tenneco’s aftertreatment systems enable engines to comply with the IMO and EPA regulations.

For a workboat operator contemplating (a.) newbuild, (b.) repower and/or (c.) merely adding SCR to an existing engine, the choices can be confusing. Tenneco’s Jackson sums up the equation succinctly, saying, “While there are costs associated with all powertrain technology upgrades, an SCR system would be a fraction of the cost of a new or remanufactured engine.” Tenneco’s money is on SCR, and Volvo Penta is on the same course. And, it is difficult to argue with either OEM. That’s because, when it comes to emissions management, experience counts. 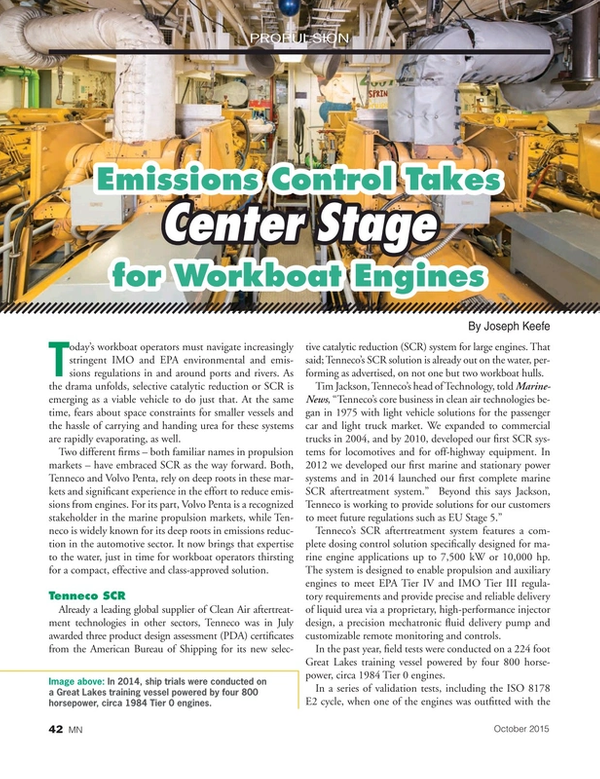