Salvage & Wreck Removal: Market Trends and the US Perspective

The global salvage business continues to be very dynamic with emerging trends and significant moves made by major salvors. While not as heavily affected by primary economic factors such as the offshore market’s connectivity to oil prices, the global market for salvage and wreck removal continues to evolve rapidly and the U.S. influence on the market plays an important role. There are many market pressures on salvage companies beyond a business model that are inherently risky; these market forces will continue to shape the industry with interesting results.

The average cost and complexity of salvage and wreck removal cases has increased dramatically for a variety of reasons: mega ships (which can be incredibly challenging to salvage) are being placed into service at an alarming rate, there is ever-increasing regulatory oversight around the globe for salvage and wreck projects, environmental criteria and scrutiny for performing salvage work continues to tighten, and the number of stakeholders with influence during salvage cases continues to grow.

The Costa Concordia project is a good example of the many factors that can lead to an expensive end result. In the United States, a visit to a command center for a large emergency salvage project highlights the complexities and sheer number of stakeholders. It is actually common to have more stakeholders (personnel) in the command center ‘overseeing’ the project than those actually out responding to the incident.

On the emergency response side, there is a trend of decreasing Lloyd’s Open Form cases despite a growing number of ships worldwide. This fact is the source of anxiety among many traditional salvage firms. The reduction in LOF’s is especially apparent in the U.S. Pre-contracting of salvors and the obligation for salvors to respond has softened the leverage of the salvor for negotiating a traditional LOF contract at the time of the casualty. Owners and underwriters are also seeking response partners on a worldwide basis, and as a result of this ‘preferred responder’ arrangement, the LOF contract is not always viewed as favorably by many owners/underwriters.

Also in the United States, the 2014 implementation of the non-tank vessel response plan (VRP) regulations required operators of all tank and non-tank vessels over 400 gross tons in U.S. waters to comply with the requirements of OPA 90, including the recently enacted Salvage and Marine Firefighting (SMFF) regulations. These SMFF regulations are the most prescriptive and stringent of their kind in the world and while only applicable in the United States, the regulations have reaching international implications.

Preparation for implementation of the regulations demanded significant investments by core providers in personnel and equipment and the recurring maintenance costs for the required response posture are substantial. Additionally, the stakes are raised for primary providers from a responsibility standpoint; the core providers have a contractual obligation to respond to clients’ emergencies.

Interestingly, the implementation of the SMFF regulations attracted global salvage players to the U.S. market that previously had little to no presence. Given the significant investments made and the increased level of commitment, many believed that there would be substantial returns in the form of annual retainer fees charged to vessel owners. Ironically, the pressure to sign up SMFF clients along with the additional players in the game resulted in a price war that virtually eliminated the retainer fees. The salvors are currently subsidizing the U.S. response posture! Ship owners and taxpayers should be pleased by the unexpected result.

The U.S. response market is clearly important to the world market and service providers recognize this. The emerging trend is for vessel owners and operators to contract with response partners on a global basis, very much like the U.S. SMFF model with designated responders and pre-arranged contracts. In order to have competitive access to this emerging global market, a provider must be active in the U.S. market where most major shipping companies operate.

Market pressures have prompted both consolidation and diversification among the salvors. Svitzer Salvage and Titan Salvage have merged to form Ardent. Alaska-based Magone Marine has merged with Resolve Marine Group. Most successful salvage companies have diversified or have integrated with larger groups that offer other services including towage, spill response, training, diving, dredging, or marine construction. These trends are expected to continue as companies strive to achieve sustainable business models while maintaining increasingly expensive response capabilities.

Despite the market pressures, there are bright spots. As the bar for U.S. response capability has been raised, many core providers have leveraged this increased capability and profile to achieve direct success internationally. For example, American salvors are routinely securing contracts for the largest salvage and wreck removal contracts around the world.

The American Salvage Association (ASA) remains a common voice for the American salvage industry. The ASA has gained tremendous insight throughout the entire development and implementation process of the SMFF regulations, and has also earned credibility and respect among all stakeholders including the U.S. Coast Guard. The ASA is in a unique position to expand its horizons and provide guidance and insight on these processes in other countries with developing salvage response models. For example, recent activities of the ASA have included joint training sessions with the Panama Canal Authority and the Canadian Coast Guard.  The American Salvage Association stands ready to share their guidance and insight on an international level. The simplest way to access that knowledge is as an active member of the ASA.

The Author
Todd Schauer is Director of Operations, Resolve Marine Group and President of the American Salvage Association. He graduated from the U.S. Coast Guard Academy with a degree in Naval Architecture.  His experience in the Coast Guard included shipboard engineering, marine safety, advanced engineering and emergency response. He served for five years on the USCG Salvage Emergency Response Team (SERT) including acting as Team Leader. 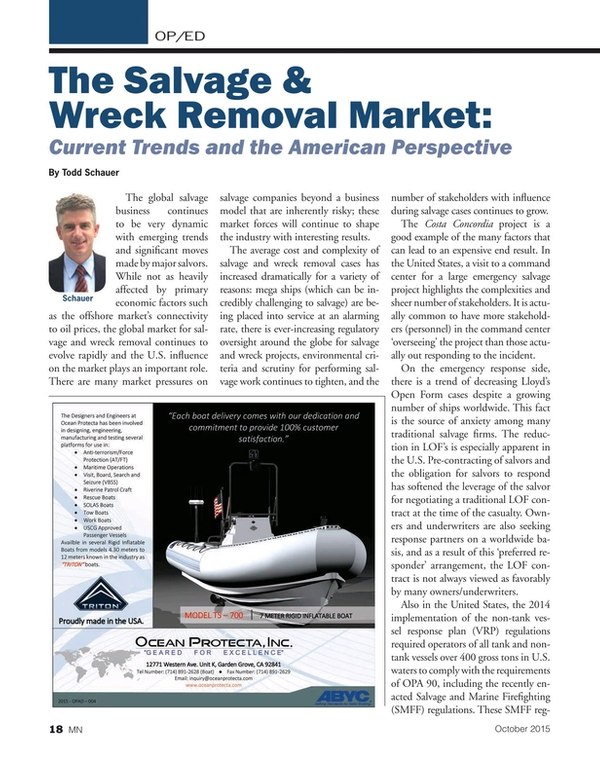 Read Salvage & Wreck Removal: Market Trends and the US Perspective in Pdf, Flash or Html5 edition of October 2015 Marine News