U.S. Coast Guard Guidance Helps to Bring some Clarity to the Debate.

In July 2015, the U.S. Coast Guard released Navigation and Vessel Inspection Circular 01-15 (“NVIC”), titled Marine Casualty Reporting Procedures Guide with Associated Standard Interpretations.  The purpose of the NVIC is to assist vessel owners and operators in understanding the marine casualty reporting requirements, which many in the industry think are about as clear as mud. Confusion as to what constitutes a marine casualty and what incidents need to be reported has persisted in the marine industry for years. And, unfortunately, little official guidance had been published by Coast Guard Headquarters regarding its policy interpretation of the reporting requirements. This problem was historically exacerbated by differing interpretations within the various Coast Guard field commands and attendant inconsistent enforcement actions.

The NVIC was an attempt to resolve some of these issues – it clarifies terminology and phrases within the regulatory context, draws attention to helpful regulatory citations, and provides policy interpretations to assist vessel owners/operators with the casualty reporting process.  But, there’s still a long way to go to make the marine casualty reporting process efficient and meaningful, and those necessary fixes may require a regulatory project, so relief is still on the distant horizon.

Back to the Basics
To put things in context, marine casualty or accident includes any casualty or accident involving vessels, with few exceptions, that: (1) occurs on the navigable waters of the United States, its territories or possessions (generally out to 12 nautical miles from the coastline); (2) occurs on a tank vessel in the Exclusive Economic Zone (“EEZ”) if there is material damage affecting the seaworthiness or efficiency of the vessel; or involves significant harm to the environment as a result of a discharge, or probable discharge, resulting from damage to the vessel or its equipment; or (3) occurs outside the navigable waters of the United States in a certain geographic area and involves a U.S. citizen on a vessel that (i) embarks/disembarks passengers in the United States or (ii) transports passengers traveling under any form of an air and sea ticket package marketed in the United States.

Not all marine casualties, however, are reportable. The reporting requirements, described below, are different based on whether the casualty or accident occurs inside or outside the navigable waters (i.e., 12 nautical miles), whether it involves “significant harm to the environment,” or whether it occurs on a tanker in the EEZ. For U.S.-flag operators, however, these reporting requirements apply anywhere in the world.

NVIC 01-15
In an effort to make compliance with the marine casualty reporting requirements more attainable and enforcement more consistent, in January 2014 the Coast Guard published a draft NVIC seeking industry feedback on how the marine casualty reporting requirements can be clarified. According to the Coast Guard, the majority of the comments received from multiple industry segments and organizations made it clear that more detail was needed for specific types of marine casualties that had led to uncertainty in the past in terms of what needed to be reported (or not). As a result, several new definitions, interpretations, and common casualty scenarios were included in the NVIC.

The Coast Guard clearly sets forth its guiding principle in the NVIC when Rear Admiral Paul Thomas states, “[i]f there is any doubt whether an occurrence is a reportable marine casualty, the Coast Guard strongly encourages responsible industry parties to contact the nearest Officer in Charge of Marine Inspection…to determine an appropriate response.” The NVIC goes on to indicate that when a report is made, the Investigating Officer will make a determination if the incident is reportable or not. If not, it is recommended that you document such a determination in writing. If so, a Form CG-2692 is required within five days of the incident.

Bottom line, though, the marine casualty reporting regime still needs reform. As some stakeholders have noted, the Coast Guard should adopt a two tier reporting system, similar to OSHA’s; for reportables and recordables. This would allow minor incidents to be differentiated from major incidents, lessening the burden on both industry and the Coast Guard. As such, the Coast Guard would get an immediate oral report followed by a Form CG 2692 for major incidents where a response may be needed, but would not burden its limited resources with minor incidents, which could be reviewed on a log during inspections. In addition, enforcement should be streamlined and should more consistently take into consideration a company’s efforts at compliance considering the size of the company’s fleet, past history, and significance of the incident, rather than issuing what sometimes seem to be arbitrary penalties.

As the DHS Office of Inspector General Report Marine Accident Reporting, Investigations, and Enforcement in the USCG, dated May 23, 2013, noted:

The purpose of the investigations program in the Coast Guard (USCG) is to ensure the safety of mariners and vessel passengers by preventing marine accidents, protecting the environment from oil spills, minimizing the property loss and disruptions to commerce.  The USCG is responsible for identifying, investigating, and enforcing reporting requirements related to marine accidents involving commercial vessels….

The USCG does not have adequate processes to investigate, take corrective actions, and enforce Federal regulations related to the reporting of marine accidents.  These conditions exist because the USCG has not developed and retained sufficient personnel, established a complete process with dedicated resources to address corrective actions, and provided adequate training to personnel on enforcement of marine accident reporting.  As a result, the USCG may be delayed in identifying the causes of accidents; initiating corrective actions; and providing the findings and lessons learned to mariners, the public, and other government entities.  These conditions may also delay the development of new standards, which could prevent future accidents.

With its limited resources, the Coast Guard should focus on which incidents should be reportable and which warrant investigations.  This way the Coast Guard could direct its efforts at ascertaining trends to further marine safety and help companies reduce their risks, rather than collecting data which often is not timely evaluated for purposes of ascertaining lessons learned.  All marine casualties are not equal and should not be treated that way.

Until such time as there is wholesale reform of the marine casualty reporting system, however, the industry should become familiar with the guidance provided in the NVIC, which is in essence the Coast Guard’s “playbook” for how it will respond to casualty reports or failures to report.  Industry stakeholders should ensure that crew and shoreside personnel are familiar with the Coast Guard’s guidance, and heed the recommendation to contact the Coast Guard whenever in doubt to avoid Coast Guard enforcement action for a failure to report a marine casualty, as penalties can range up to $35,000.


(As published in the October 2015 edition of Marine News - http://magazines.marinelink.com/Magazines/MaritimeNews) 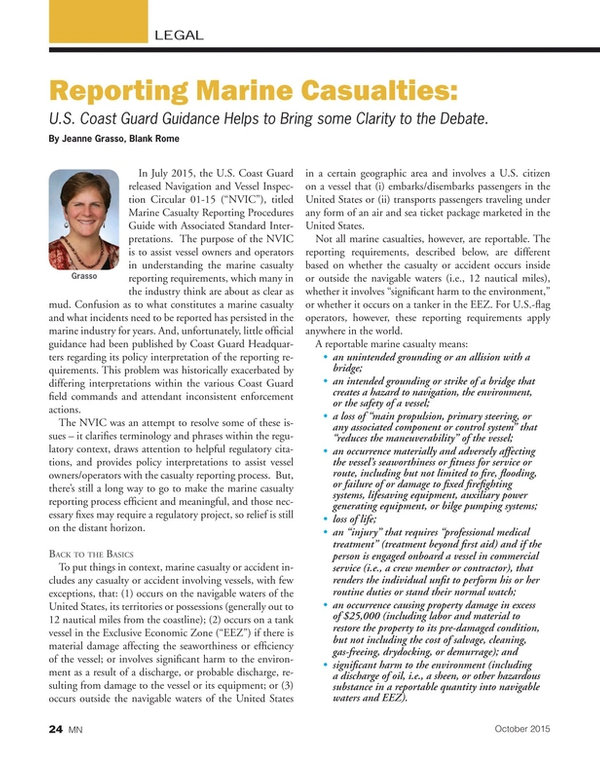