Riders on the Storm

It’s no shock that decking, seating and other related equipment for ‘fast boats’ is a critical ingredient for maritime security personnel.

A  shock mitigation strategy is essential for all craft that undertake open sea transits or operate in rough water. The definition of shock mitigation is, ‘to make a violent collision or impact less intense.’ The search for shock mitigation has created a range of solutions. Before that, however, criminal organizations capable of buying fast boats were most likely running something, or someone, illegal in from offshore.

The buyers, from the Mediterranean to the Caribbean, were concerned only with how much payload they could carry and how fast would the boat go. They soon owned the fastest boats on the water. Seating was irrelevant and crews were usually standing on hard decks as any wasted space or weight reduced the all important payload. As the distance from Morocco to Spain and Bimini to Miami is around 50 miles, identifying a boat capable of over 50 knots was an important criteria.

In the early days of counter ‘go fast’ operations for marine police, customs and borders organisations the focus was firmly placed on procuring high performance hulls to chase down offenders. Boat crews and enforcement officers were usually standing in wrap around bolsters or leaning against padded rails. There were no seats and these hard core operators were using their experience, balance and leg muscles to ride the boat.

Go Fast Operations
Countering a high value, high speed run required a capable fast response boat with fit crews ready for a short sharp pursuit, usually at night, that often ended in a ‘lights off’ high speed chase in the intercoastal waterways. This was a brief one on one, win or lose situation with lucrative pay off for evasion. Hence, the history of ‘shock mitigation’ technology can be traced back to the 1990’s and the rapidly changing requirements of counter narcotics and military marine operations as boats became faster with extended and more complex missions. The game changer for homeland security in port and maritime security operations was 9/11. As global stakes changed and requirements were analyzed, it became obvious that security and military boats would need to operate faster than ever before. The people on them would need to be ‘fit to fight’ determined adversaries after a fast transit in extreme sea conditions.

As high speed craft designers and professional sector boat builders rose to the challenge they built in ‘over engineering’ wherever possible. In the early days of shock mitigation, ‘feet off the deck’ suspension seating incorporated complex engineered solutions, often adapted from land vehicles. Other manufacturers then started to offer lighter and simpler ‘feet on the deck’ jockey suspension seats.

Next generation manufacturers have created a range of suspension seats and adjustable shock mitigation systems to enable humans to operate fast craft in the roughest of conditions. These solutions utilize sophisticated mechanical engineering to disconnect the boat occupant from G forces as the hull moves over rough water and wave conditions. Taking this a stage further, the latest shock mitigation technologies now utilize Man Machine Interface (MMI) to link coxswains, navigators, engineers, FLIR operators, gunners and commanders to their tasks, controls and screens.

Shock Mitigation: by all means
Shock mitigation is important for people who want to go further, faster or for longer in extreme conditions. RHIBs are an outstanding way to get afloat, but as technology changes, even a very fit human body has its limits. As crews need to focus on the task at hand it is important to protect all occupants of fast boats from injury, whether they are sitting or standing.

When a RHIB is running in flat sea conditions, occupants experience vibration coming up through their feet on the deck, held there by gravity and body mass, but boat occupants are not exposed to harm. That said; waves change everything. Waves can be windblown or can be caused by the wake from larger vessels even in calm weather conditions.

As powerboats get lighter and faster there are new issues to consider. Operating a fast boat in flat open waters is relatively easy, but running at high speed exposes novice crews and less experienced passengers to shocks and vibration when the boat hits a wave. Professional high speed craft operators need a combination of shock mitigation solutions. There is no silver bullet. Shock mitigation is about reducing forces and potential injury wherever possible via hull, seating and deck arrangements.

The EC Vibration Directive came into force in 2010, and has driven an increasing awareness that operators must reduce the effects of vibration on employees by all means. Even moderate sea conditions can be painful and lead to serious injuries to ankles, knees, lower back and neck. What they often do not realize is that just 3 foot seas can produce impacts of up to 10g on deck.

On certain craft, there is the option to retrofit suspension seating. If seats are too large or too costly, then operators will find other methods to reduce the effects of vibration and impact on the human body. With boats now expected to last 15 to 20 years, government and commercial organizations may not retrofit suspension seats. Hence, global military and professional operators are now looking at the deck and considering how to reduce the forces there.

High G Forces for Occupants
The big force that RHIB crews experience is when the boat climbs over the top of a wave and occupants experience a negative gravity sensation, not unlike the hump on a roller coaster. As the boat lands, the Vee of the hull displaces water until it can go no deeper. A few milliseconds later, occupants land on deck and their body decelerates with everything from the head down pushing into the feet if standing, or into the backside if sitting. Ask a group of fast craft professionals where it hurts and you will usually get the same answer: lower back, knees and hips.

Without suspension seats, experienced operators usually choose to drive RHIBs standing up in anything but flat conditions. Most fast boat operators prefer to stand to see oncoming waves and use their legs to balance and absorb the boats movement. At that point, they also have the opportunity to engage and use an incredibly complex suspension system – the human body.

Typical decks made of aluminium, fibreglass and composite materials transmit shocks and vibration. Standing on foam or rubber flooring is an option, but most of these materials lack stability which causes fatigue. This is where the constant ‘firing’ of ankle and calf muscles eventually leads to shaking legs. When simply standing on most foam products the material is already pre-loaded, which means that feet sink towards the deck, therefore reducing the depth of cushioning. For heavier occupants in wave conditions, it becomes increasingly likely to bottom out which feels like the underside of the feet have been hit with a hammer.

Impact Mitigating Boat Decking
Just as suspension seats are more engineered than standard foam seats, impact mitigating boat decking solutions need to be more engineered than simple rubber or foam. For example, Skydex Technologies have developed high-performance boat decking products that use patented energy-absorbing geometries to reduce the effects of impacts and dampen vibration on high speed craft. The objective is to reduce the potential for injury and protect equipment when exposed to wave slam events.

James Taylor, President & CEO of Skydex Technologies, told MarineNews, “Skydex has developed products that excel in harsh environments and our technology has been employed extensively around the world. The technology that we bring to the marine market is the same that we have supplied as blast mitigation flooring to protect the occupants in over 20,000 military vehicles.”

Skydex Boat Deck is available in a range of products, from 14 to 50mm thickness, based on the level of deck coverage and mitigation required. This can be fitted on new boats or as a retrofit solution. The technology leverages elastomers and proprietary geometries to create a multiphase spring that is engineered to react differently to various levels of impact.

Peter Foley, Chief Technology Officer of Skydex Technologies, explained, “Skydex works differently than foam and is tuned to react to the expected levels of shock. For example, in a wave impact situation, particularly in the dark, the human body cannot react fast enough to protect itself from the shock. Skydex reacts instantly to the forces, plus the technology works in all axes to reduce the effect on the human body whether the boat is landing vertically, into head seas or even side on.”

Impact mitigating decking can be particularly beneficial on boats with leaning posts and on boats with fixed jockey or straddle seats where the occupants stand in rough conditions. Even ‘feet on the deck’ suspension seats require the occupant to use their leg muscles and carry a percentage of body weight on the deck, this can result in a significant weight on one leg particularly in crossing or side on seas.

A holistic approach to shock mitigation solutions on the water can improve comfort and reduce the effects of shock and vibration on the human body for crew and passengers. For professional ‘Riders on the Storm,’ this can minimize downtime from injuries and extend the working life of maritime professionals. 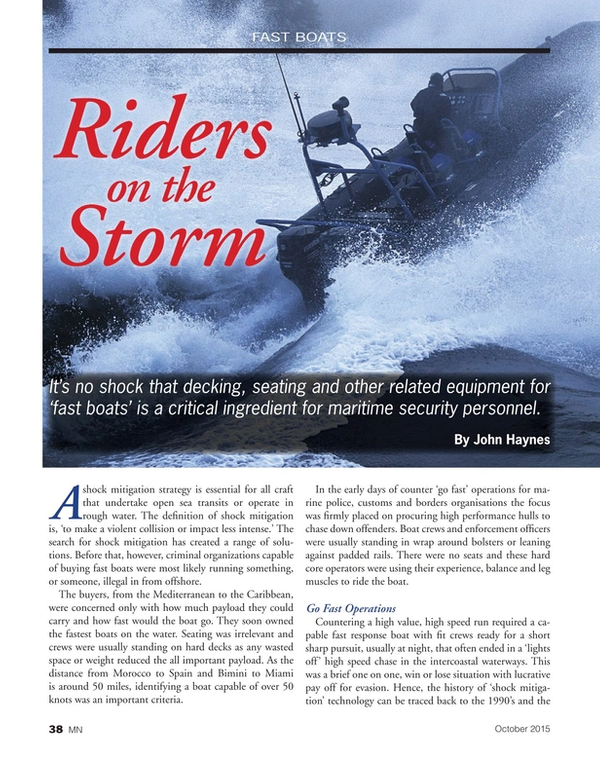 Read Riders on the Storm in Pdf, Flash or Html5 edition of October 2015 Marine News