Maritime Security for the Municipal Sector

Without sacrificing utility or features, the Metal Shark 75’ Endurance and the Moose M3 models both provide multi-missioned platforms for the cash-strapped municipal sector.

A crowded field for today’s domestic boatbuilders and a highly competitive marketplace finds builders trying to position their output and designs to a place that separates them from the pack. One place to do just that is in the market for maritime security workboats, particularly when it comes to local, state and municipal buyers.

Municipal and state buyers want a great deal for their declining budget dollars. In response, builders are sharpening their pencils and putting together vessels that offer not only bang for the buck, but also multi-missioned vehicles designed to leverage a single hull into one that can perform the duties of three. Two builders, Louisiana-based Metal Shark and California-based Moose Boats, go about the task in a slightly different manner, but with similar, impressive results. Either way, cashed strapped public sector law enforcement and security stakeholders may have just found a way to get the job done, without sacrificing performance.

For firefighting, twin dedicated drive engines channel up to 6,000 total gallons per minute through an oversized water main where electronic valves divert water to three RF-controlled monitors. Four additional 2.5” hydrant connections and a 400-gallon foam reservoir provide maximum flexibility across the full spectrum of firefighting needs. And, with a roomy pilothouse featuring 360-visibility, and bunking capacity for multiple crew, the 75 Endurance is ideal for multi-agency coordination. The latest version is equipped with a positive-pressure Chemical, Biological, Radiological, Nuclear, and high-yield Explosive (CBRNE) ventilation system for crew protection.

As currently outfitted, the vessel can do double duty as a multi-purpose municipal vessel. Josh Stickles, Metal Shark’s Director of Marketing, explains, “Our 75’ Endurance was designed as a multi-use platform that may be custom configured to support a wide range of missions, with a focus on firefighting capability. This particular boat is a ‘multipurpose port security and response vessel’ set up for Fire Rescue, Law Enforcement, and Port Security missions.”

According to Stickles, there is robust demand for aluminum catamaran designs across this sector. He told MarineNews in September, “We’ve seen demand for this type of vessel across numerous markets where stability and maximum deck workspace are key considerations. Due to its wide beam, a catamaran hull surpasses a monohull vessel of comparable length in both of these areas. On this particular vessel, the customer was looking for enhanced stability at slow and fast speeds, a hull shape that mitigates wake size as much as possible, maximum working space on deck, and ample crew quarters below.”

Also according to Stickles, the boat’s 6,000 total gpm pumping capacity is impressive, but it was also matched to their customer’s requirements. He added, “We can easily offer higher or lower capacity solutions depending on what the customer wants.” Beyond that, the boat can continue to pump water and maintain steerage if it drops an engine because the fire pump engines are independent of the propulsion engines. Not every fireboat can boast that metric.

With a hull draft of just 50 inches, the vessel is specifically designed for riverine and shallow draft operations. And Stickles insists, “It has a shallower draft than most vessels of this size and weight. For customers requiring something even shallower, the vessel may be equipped with water jets.” According to Stickles, the type selected will depend on the needs and wants of each customer.”

Stickles had a hard time distilling the merits of his newbuild offering down to a single innovation. We asked him to do so, nevertheless. He replied, “You’ll see evolutionary enhancements throughout, from our 360-degree pilothouse glass that greatly improves visibility, to many designed-in, as opposed to bolted-on, mission specific features. Probably the biggest takeaway expressed by customers who have been aboard is that this is a very crew friendly design that manages to incorporate multiple complex systems in a way that makes them easy to use.”

Already a key supplier to the U.S. Coast Guard, Metal Shark also offers armor as an option. Stickles says that the Command and Control aspect adds another level of capability and makes perfect sense for municipalities looking to get the most use out of their vessel. Or, in other words, big bang for the buck.

Moose Boats’ M3-30 Monohull
When Moose Boats first built its M3 (34’-4” LOA) monohull demonstrator in 2011, the move may have surprised some stakeholders. After all, Moose is widely considered one of industry’s most prominent catamaran builders. No one should have been surprised when the Moose monohull provided so much value in such a compact hull. Here’s why:

According to Mark Stott, Sales Engineer for Moose Boats, the intent was to offer all the design features, ergonomics and quality of Moose Boats catamarans in a smaller, more tactically maneuverable and less expensive platform. Stott reports, “The model has been successful with Los Angeles Police Department Hydra Operations who have two of the boats in service, the original demonstrator and a version two feet longer with triple 300hp outboards configured as a multi-mission dive, offshore interdiction and SWAT deployment vessel.”

Another M3 was also built for New Orleans Fire Department. Stott says, “The feedback we received from LAPD on the M3’s handling and offshore capabilities were exceptional and that its generous deck level cabin and large cockpit provided far greater functionality than other law enforcement monohull vessels available.” With the firefighting configuration, the vessel pumps up to 1,500 gpm, adding to its multi-mission potential.

For several other agencies, however, with typical law enforcement crews often being limited to one or two personnel, it was difficult to access the bow line or make contacts with other vessels without leaving the helm. It then became apparent to Moose Boats that a void existed in the market for a versatile monohull law enforcement vessel that was large enough to handle offshore conditions and also offered seating for multiple crew members, and could also be utilized day-to-day by a single operator. The M-3, tweaked with some notable modifications, was just the ticket.

Based on feedback from several existing Moose customers, there was a need for a cabin allowing entry and egress for an operator and a second crew member through full height wide side sliding doors and unobstructed transit between the cockpit and foredeck while wearing service belts, ballistic protection and PFDs. Working with the proven high freeboard, 9’-6” beam M3 hull, Moose Boats designers Roger Fleck and Charlie Hicks began design work on a walk around cabin with an emphasis on ergonomics, situational awareness, safety and deck functionality.

Fleck and Hicks sized the cabin to balance the internal and external requirements and developed custom, low profile sliding side doors to maximize the opening area and minimize obstruction to the walk around area. The helm seat is now biased closer to the M3’s centerline, providing greater visibility for the operator while in-turn allowing access to the aft area without exiting through the side door. The newly designed offset helm chair also allows the operator to stand safely next to the helm seat with access to the steering and throttles while making contact with other craft.

Notably and to reduce visual obstructions, the windows of the M3’s two side sliding doors and hinged aft door align with the cabin’s fixed windows when the doors are open. Maximizing cabin space, a locking long rifle cabinet is integrated into the starboard aft cabin pillar while on deck fender pockets and a tow reel are recessed into the aft coaming keeping the decks uncluttered.

With modular and removable seat structures, the cabin interior layout can be tailored to suit the end user’s intended mission or altered in the future, if required. Easily accessible engineering spaces provided for a forced air diesel heater, reverse cycle air conditioning and a 7kW Generator.

The M3-30 demonstrator – the Moose designation due to it’s just under 30’ hull length – has proven its performance to San Francisco Bay Area and Los Angeles marine law enforcement and is currently under evaluation by agencies in the Northeast United States. Based upon the immediate interest indicated by agencies that have already seen the M3-30, Stott explains, “Only one has been built so far. It is being evaluated by both the New Jersey State Police and the New York Police Department. Completed in July of 2015, it was arguably a gamble. But, this hull comes at an attractive price point, and gives an organization the opportunity to do more with less hulls, each of which will accomplish so much more.”

Two Examples: One Goal, Enviable Results
Moose and Metal Shark both target similar markets with a different approach to providing the same end result: an affordable multi-mission hull that can be customized to suit the needs of myriad users. For domestic customers, the two vessels provide two distinct size choices (75’ versus ~ 30’) that satisfy the same market needs. And, that’s not to say either or both wouldn’t fit well into what has emerged as a robust export niche for smaller U.S. yards. As Moose and Metal Shark rapidly up the ante in Maritime Security for the Municipal Sector, the idea rolls right off your tongue, doesn’t it?

(As published in the October 2015 edition of Marine News - http://www.marinelink.com/magazines/default.aspx) 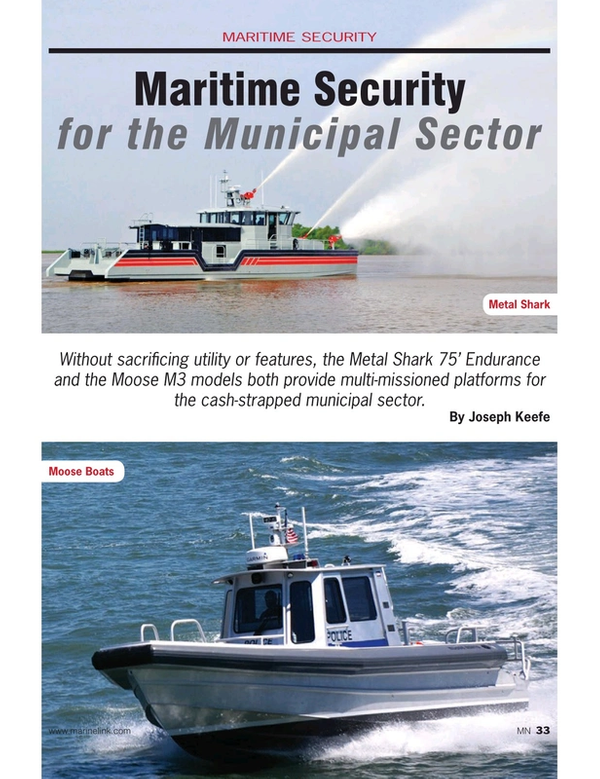