Export hulls – through the FMS Program, as well as Direct Sales – are a key piece of the business model.

Even as the crash in energy prices feeds the oversupply of offshore support vessels – a key staple of U.S. boatbuilding diets – and the dwindling backlogs of some so-called ‘second tier’ yards,  a number of U.S. boat builders are still seeing robust demand for security vessels. Separately, tightening federal, state, municipal and overseas budgets are being trumped by the increased need for security craft that can perform more than one function. And, a big part of that metric turns out to be export hulls.

As maritime defenses are bolstered in several regions, particularly the Middle East, U.S. Foreign Military Sales (FMS) assistance helps builders do business overseas. Some companies have expanded their order books through that channel, while still others have made direct sales to foreign governments.

On this side of the pond, counties and local municipalities are using their taut funds, along with grants and matched grants, to pay for security vessels. Last month, MarineNews spoke with six representative U.S. builders who have delivered security boats in this calendar year. It turns out that U.S. boat builders are alive and well in an increasingly difficult market. In the fourth quarter of 2015, maritime security also means job security.

Tampa Yacht: Interceptors for Kuwait
Tampa Yacht Manufacturing in Florida is building a series of 29 fast, coastal interceptor-class vessels, 44 feet long, ordered by the Kuwait. “The contract started in March of this year, and construction began almost immediately,” Tampa Yacht’s CEO Robert Stevens said last month. “The first vessel was launched, sea-trialed, thoroughly tested by the customer and accepted in August. We built it in 18 weeks, and each succeeding boat will be completed five weeks apart.”

Seven more vessels are in various stages of completion, with the first four of them scheduled to head to Kuwait in November, Stevens said. Notably, the contract is with the Kuwaiti government and is not under U.S. Foreign Military Sales. Stevens estimated that its total value might exceed $60 million.

Designed for a crew of four to six, the company’s carbon-fiber-reinforced, all-composite-construction interceptors for Kuwait contain the latest electronics and a range of weaponry. They have Arneson ASD11 surface drives and Rolla propellers. Dual MAN R6-800 turbocharged engines, developing total power of 1,600 hp, give these interceptors a speed exceeding 55 knots at full load. The surface-piercing design of the Arneson Surface Drives cuts appendage drag by 50 percent, versus conventional submerged systems, Stevens said.

With its matched, five-blade, high-efficiency nibral Rolla propellers, the interceptors for Kuwait  accelerate quickly and have a good payload-to-power ratio. Fast operation stability is enhanced with trim tabs from Twin Disc Arneson Surface Drives. They efficiently transfer a maximum amount of thrust from the engine to the water, Stevens said. High-quality materials, along with robust drive construction, keep maintenance costs low.

These interceptors give the crew control over tactical operations, including boarding. They employ Twin Disc’s MGX-5114 A QuickShift marine transmissions, matched EC300 Power Commander electronic control and a bow thruster. The boats also offer precision, low-speed maneuverability when next to another vessel in a range of sea conditions, Stevens said.

“All are under contract, with a scheduled delivery of 2018,” Swiftships CEO Shehraze Shah said. “These contracts were signed with the nations’ ministries of defense, and are funded as follows: four of the 28 meters are through U.S Foreign Military Financing via the Foreign Military Sales program; six of the 28 meters are via Middle Eastern-sourced funds, and two of the 35-meter patrol boats are via DomRep Security Assistance funds.”

Shah said two primary avenues for overseas business are Foreign Military Sales, with the U.S. Department of Defense as negotiator, and Direct Commercial Sales. DCS is arranged directly between a vendor and a customer, with an export license issued by the U.S. State Department. Officials at Swiftships, asked about backlogs, replied, “In addition to the already-mentioned contracts, Swiftships has a $180 million backlog of in-builds for multi-purpose, maritime-marine vessels for the Middle East North Africa region,” Shah said. He declined to name those countries.

The 70-foot, high-speed NYPD vessels have deep-V hull and squared-off bows, with fendering and knees installed above the main deck for bow landings. They were designed by C. Raymond Hunt and Associates in Massachusetts to respond to the terrorism threat on New York’s vast waterways system. Inside the flush-mounted wheelhouse, ballistic-resistant windows in the front, side and aft provide 360-degree visibility. The boats’ fly bridges offer views, too. A remote-control water cannon is mounted on pilothouse roofs. A command center includes video monitors, decontamination showers and seating for five crew members. The boats have two berths, storage lockers and a small galley.

The Colombia Class vessels, 60-foot, deep-V hulled boats – also designed by C. Raymond Hunt – are of all aluminum construction. Production began in March 2013, and the first-in-class ARC Gorgonilla was delivered that year. A rotating davit, located above the water-level, recessed platform in the stern, is used for rescue operations. The boat has Furuno radar and is equipped with a FLIR camera that can detect someone in the water at 500 to 800 meters. The vessel has sleeping accommodations for a crew of six.

Kvichak: Builds for NYPD, U.S. Coast Guard and Oman
The recent acquisition of Kvichak Marine Industries by Vigor Industrial gives the Pacific West Coast giant not only a new line of business, but also a significant income stream, courtesy of the maritime security market, both here and abroad. There isn’t much Vigor doesn’t do anymore, and Seattle-based Kvichak is a big part of that puzzle. “We’re currently building our fourth, Response Boat–Medium for the New York Police Department, with delivery scheduled for spring 2016,” the company’s marketing manager Carol Reid said. “We just completed delivery of seven Transportable Port Security Boats to the U.S. Coast Guard. With that, our deliveries to the Coast Guard total 59 vessels since 2011.”

Beyond their significant domestic federal and municipal markets, however, Kvichak is also building two 19-meter, all-weather pilot boats for the Port of Duqm Company SAOC in the Sultanate of Oman. “They will function as search-and-rescue and oil-spill-recovery vessels, in addition to pilot boats, and are scheduled for delivery in spring 2016,” Reid said, adding, “They are a direct buy and not through a U.S. government program.”

“This new platform was designed to accommodate many requirements in the maritime security industry,” BCGP’s sales director Jeremy Davis said, alluding to the growing appetite for budget-conscious municipalities for so-called multi-mission hulls. Today, local governments are looking to leverage many missions on the back of one hull. The Sentry, according to Brunswick, is just the ticket.   “Whether the mission is port security, game conservation or the safety of recreational boaters, this vessel can be customized to the needs of law-enforcement agencies worldwide.” The company’s Sentry line stems from a Master Supply Agreement between Brunswick Commercial and Government Products and boat builder MetalCraft Marine Inc. in Ontario.

MetalCraft Marine Supplies the U.S. Navy and Coast Guard
Not to be outdone, Kingston, Ontario-based MetalCraft is also busy, feeding on a steady diet of maritime security and military mission-specific hulls. MetalCraft sales and customer-relations representative Emily Roantree told MarineNews in September, “We’re building several 30-foot, boom-handling boats for the U.S. Navy’s Supervisor of Salvage and Diving, or SUPSALV, with a total of 30 ordered,” said. “Nine have been delivered so far. We’re also building ten, 35-foot cutter long-range interceptor boats for the U.S. Coast Guard, and four of those have been delivered.”

Outlook: Terror Threat and Domestic Crime feed maritime security needs
Because of threats from ISIS and tensions in Syria and the Persian Gulf, Middle Eastern demand for maritime security vessels will remain steady, Swiftships CEO Shehraze Shah told MarineNews. It is also true that smaller patrol vessels in the Gulf at least partly reduce the need for cruisers and destroyers in that region. As smaller, more agile assets become the preferred vehicle for smarter response to coastal, littoral conflicts, these craft are rapidly replacing the legacy 600 foot warship in this theatre. For foreign governments and the Pentagon, that frees up larger assets for other uses and – in theory – reins in spending.

For its part, the U.S. Navy will likely continue to spread financing between boat builders as demand for maritime security vessels is met over the next several years, Shah said. Separately, federal, state, county and local officials will continue beefing up waterway protection against foreign and domestic terror threats, drug dealers, other criminals and fires. That demand isn’t relegated to just local markets; foreign export hulls also constitute a big slice of the pie.

U.S. yards in particular have demonstrated that – through direct sales agreements – they can build in series, with economy and better quality than foreign counterparts. This, coupled with surprisingly persistent local domestic demand is a welcome infusion of life in a boat building climate that might otherwise be showing the beginnings of a slowdown. Maritime Security, as it turns out, is one market that appears to be immune to market pressures elsewhere.

The Author
Susan Buchanan is a New Orleans-based business writer, specializing in energy, maritime matters, agriculture, the environment and construction. She holds a master’s degree from Cornell University in agricultural economics and an undergraduate degree from the University of Pennsylvania. 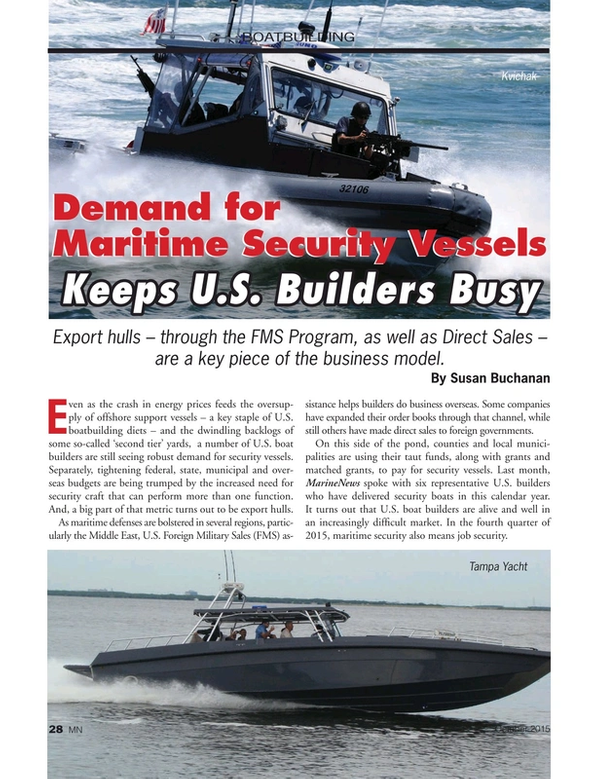