Workboat vs. Jet Ski: A Mysterious Collision and Its Consequences

As summer slowly fades to memory and commercial vessels have less frequent encounters with recreational vessels of all sizes, shapes and descriptions on America’s inland waterways, it might be a good time to review a strange, but not completely unusual incident that occurred in Louisiana on a navigable channel in the lower Mississippi River late last May.

A workboat was pushing a small barge through a narrow tributary on a job to deliver it to its destination approximately twelve miles away from where the transit originated. The late spring sun had already set, but clear skies and a bright half moon made for easy going and, because the barge was in a light condition, the tug/barge combination was a little ahead of schedule. With ideal weather conditions and partially moonlit skies, visibility from the vessel’s upper wheelhouse was good with minimal visual obstructions from the barge.

A Strange Encounter
Approximately halfway to his destination, the vessel’s captain noticed several rapidly moving lights ahead of him. While mostly on his portside, he saw a few more similarly lit objects moving parallel to the shore on his starboard side just slightly ahead of the barge he was pushing. Beyond the moving lights, he observed a few small fishing shacks and small docks hugging the channel’s bank.

Not immediately recognizing what he was looking at, as his small tow drew closer to the lights, he heard the unmistakable whine of several jet skis and quickly deduced that the moving lights were powerful flashlights being held by the operators of the otherwise unlit personal water crafts (PWCs).

He counted at least a dozen jet skis zigzagging up, down and across the channel with some apparently attempting to jump the small wake his mini-flotilla was creating. That action concerned him because, in their attempt to jump the largest waves created by his passing, they were getting dangerously close to his stern.

As a precaution and in an attempt to get them to back off, he sounded a short blast to alert them that he was aware of their presence and did not approve of their dangerous thrill-seeking activity. Throughout the brief encounter, he maintained a safe, steady speed and his position in the center of the channel. After covering about a quarter mile of distance up the channel, both the noise and dancing lights disappeared.

An Unexpected Development
When he finally arrived at his destination to deliver the barge less than an hour later, he was surprised to see a U.S. Coast Guard investigator waiting for him at the dock to board his vessel. Further to his surprise, the no-nonsense officer informed him that the local Coast Guard office had received a call about 30 minutes earlier to report that a jet ski had collided with the barge he was pushing and was now damaged and disabled, about four miles down channel. Much to his relief, he was told that the PWC’s young operator was not injured and had been plucked from the channel by a jet ski operated by one of his friends from the night-riding group. The USCG investigator explained to the workboat’s captain that he was there to interview him and his crew about the alleged collision.

Recognizing the sudden potential threat to his license and livelihood, the shaken captain immediately took the time to report his situation to his license insurer which quickly connected him to a local attorney from its national network. That experienced maritime law specialist promptly called the frustrated captain on his cellular telephone to prepare him for the impending initial onsite Coast Guard interview. While acknowledging his brief encounter with the thrill-seeking jet ski group, about 45 minutes earlier, he flatly denied any knowledge of the alleged collision. He further provided the investigator with a written statement supporting his contention. After briefly speaking with several members of the workboat’s crew, the USCG investigator left the scene without taking any further action, but informed the captain that he would shortly be contacted to come in to a local Coast Guard facility for a more formal interview regarding the alleged incident. He responded that he would come to the interview with his attorney.

The Story Unravels
At first light the next morning, a damaged jet ski was recovered from the area of the incident bearing significant damage to its right side from what appeared to be a sideswipe collision or allision with another vessel or fixed object. Further investigation led to the discovery of significant damage to the vertical posts at the end of one of the small docks in front of one of the fishing shacks lining the shore in the vicinity where the previous night’s encounter had taken place. Ownership of the damaged PWC was tracked to a local teenager who readily acknowledged being out on the channel riding his jet ski the night before with a group of his friends.

Eventually, he admitted ‘buzzing’ the tug/barge combination the night before, but that his uninsured PWC had sustained the damage and became disabled after striking the end of an unlit dock which extended out into the channel about 15 feet. That PWC/dock allision occurred 5 to 10 minutes after the larger vessels had cleared the area. He finally admitted that he asked one of his friends to call his dock allision in to the Coast Guard as a collision with the mini-flotilla in a fraudulent scheme to get some insurance money to repair his jet ski. These new facts prompted the Coast Guard to get the local law enforcement authorities involved who initiated their own investigation of the two teens who concocted the ill-conceived scheme.

Lessons Learned
While relieved to be exonerated of any involvement in the incident by the teenagers coming clean on what really happened, the still furious captain decided to work with the local authorities to enable them to prosecute the boys for their folly which put his U.S. Coast Guard-issued license temporarily in the crosshairs.

While this incident ultimately ended satisfactorily for this falsely accused professional inland mariner who had his own license insurance policy and immediate access to counsel and representation, it’s sadly more the exception than the rule in many David (recreational boater/PWC operator) versus Goliath (professional mariner) encounters in which the latter is held to a much higher standard of care to the point where many often believe they are perceived to be ‘guilty until proven innocent.’

It’s an unfortunate reality, but one that every prudent Coast Guard license holder must consider when deciding how best to protect his or her license, livelihood and professional reputations.


Editor's Note
In a former life as a marine surveyor in the 1980s and 1990s, this editor saw the proliferation of PWC’s in crowded waters, operated by recreational users, often with very little boating experience, and this gave rise to a robust (and presumably busy and lucrative) Admiralty law specialty that exists to this day. PWC accidents, unfortunately, are not uncommon.


The Author
Randy O’Neill is Senior Vice President with Lancer Insurance Company and has been Manager of its MOPS Marine License Insurance division since 1984. Over the past 29 years, O’Neill has spoken and written on many occasions on the importance of USCG license protection. He is a regular contributor to Marine News magazine. He can reached at: [email protected]


(As published in the November 2016 edition of Marine News) 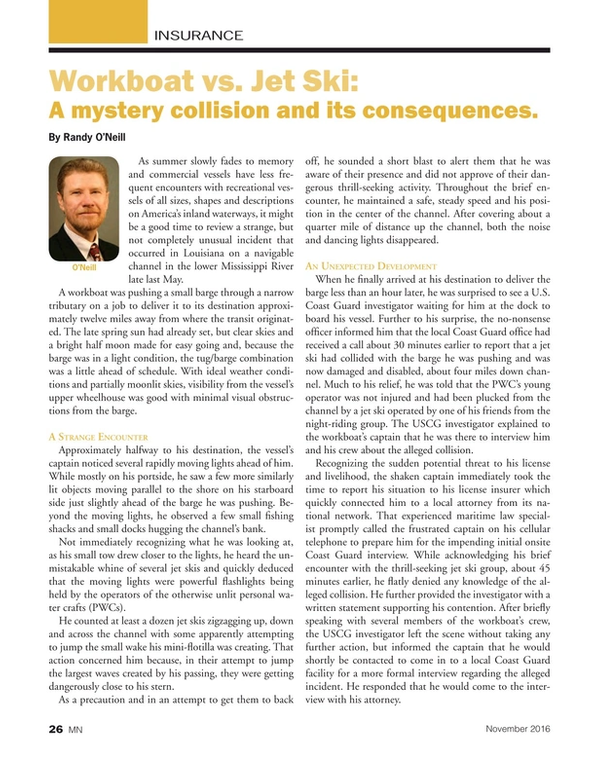 Read Workboat vs. Jet Ski: A Mysterious Collision and Its Consequences in Pdf, Flash or Html5 edition of November 2016 Marine News