On a warm summer morning last July, boat owners and passersby were drawn to a craft not often seen in the sleepy harbor of Wickford, Rhode Island. Tied up at the dock was the new, 37-foot, Multi-Mission Interceptor (MMI) recently produced by SAFE Boats International, where it was making a stop along its promotional run down the east coast. The craft features a sleek, state of the art design and is fully equipped with best-of-breed technology and products from a variety leading marine companies, including Mercury Verado outboard engines, Raymarine navigation system, SHOXS Shock Mitigating Seating and FLIR gyro-stabilized multi-sensor imaging systems, to name just a few.

Comms 101
For critical communications, SAFE Boats partnered with David Clark Company of Worcester, Massachusetts. David Clark specializes in providing communication headsets and system solutions for high-noise environments. The company’s ‘green dome’ headsets are perhaps most recognized in the aviation industry, where they have been worn by private, commercial and military pilots since David Clark pioneered the product category in 1975. David Clark has been supplying the marine industry with wired and wireless headset system solution for the past 15 years. True to form for the new MMI, the vessel is equipped with the new Series 9100 Digital Intercom System from David Clark.

“A major part of what went into the design of this boat was working with our elite partners from engine manufacturers to electronics providers, one of which was David Clark, who provided the digital intercom system and integration of our stereo and radio systems with the headsets,” said Rob Goley, Business Development Director for Federal Programs for SAFE Boats. Goley added: “At SAFE Boats, we provide products that demand proven performance during dangerous missions in tough conditions and harsh environments. Communication is critical in these conditions. The David Clark digital system allows operators to communicate internally with one another, but also externally through various radio systems to accomplish the mission.”

Versatility for a wide variety of applications
The system versatility that Goley references is a key benefit to users. The modular interface flexibility of communicating both crew-to-crew and externally through radio systems is a key benefit to users. The master station provides high performance Ethernet/IP versatility and is the heart of the system. It is designed to accept modular cards that provide users with access to the entire digital network, connectivity and software-enabled access to multiple mobile radios, loud hailers and Bluetooth devices. “The Digital Intercom System’s versatility makes it a great fit, not only for high-performance interdiction craft like the MMI, but also on board a wide range of workboat vessels. Single or multi-channel programming options provide enhanced flexibility for a virtually unlimited number of users. In addition, headsets are interchangeable between wired and wireless configurations to suit a wide variety of applications.” said Bob Daigle, Product Manager, Systems for David Clark Company.

Digital system user interface products – Headset Stations, Wireless Belt Stations and Gateways – provide connectivity from the Master Station to the headsets. All units feature “SMART VOX,” an automatic VOX technology that adapts to background noise in real time, while applying unique DSP algorithms to discern between noise and speech, for instantaneous and effective mic control with no manual adjustments. “SMART VOX” technology is particularly beneficial in craft such as the Safe Boat MMI, with a maximum speed of 55+ Kts that generate an amazing amount of wind and engine noise.

The Series 9100 Digital Intercom System allows for programming options for each individual user and for multi-channel device assignments/restrictions. Programming choices for critical communications can determine who hears what (e.g., intercom, radios or other devices; how they hear it (“split audio or radio in left ear and intercom in right ear, etc.); who communicates with whom (intercom, specific radios); and how users communicate (hands-free intercom, multiple PTT configurations for intercom and/or radio).

Digital technology simplifies system setup and operation
Of additional importance to both boat manufacturers and users for marine communications is the ability to integrate a system on board a vessel and ensure that it is easy to use for crew members. These considerations were not lost on SAFE Boats’ designers. Rob Goley reports, “As a boat manufacturer, integration is everything to us. The David Clark system was easy to setup and easy to integrate. We had great customer support installing the system from the engineering team at David Clark. For the end-user, it’s very easy to operate and works when you need it, and it’s very easy to use.” Ease of set-up and use is complemented by the comfort and durability of headsets and system components that need to stand up to harsh marine environments and continuous use. Headsets include over-the-head and behind-the-head styles with gel/memory foam ear seals. Quick positioning, flex/wire booms with advanced M-2H microphones optimize noise cancellation while enhancing speech clarity. Noise-attenuating headsets feature a PTT switch located on the headset boom, making it easy to find and actuate in the most stressful situations that can occur in surf and water rescue, maritime law enforcement, migrant and drug interdiction missions. “Many of these missions require long hours on the boat and operators need comfortable equipment that is reliable. That’s critical,” said Goley.

Meeting the communication needs of tomorrow
The digital architecture of the David Clark system is designed for maximum scalability and allows for future technology upgrades and ancillary interfaces without the need to replace system modules. The Series 9100 is an IP network-based system that provides the marine market with a future-proof communication solution that is compatible with other digital IP networks as well as analog devices like two-way radios and loud hailers.

So how is the system working out on the water? Later that morning Rob Goley put the boat through its paces at full throttle in Narragansett Bay, along with five crew members. Calling on his 21 years of Coast Guard experience, Goley subjected the MMI to a variety of aggressive interdiction maneuvers. The craft and its digital communication system performed flawlessly. Goley concludes by saying, “At SAFE Boats, we’re very proud of the MMI and proud of our partners that joined forces with us to develop our product, especially David Clark in providing a rugged system that works, is exceptional in its operability and provides an excellent product to our customers.”


(As published in the November 2016 edition of Marine News) 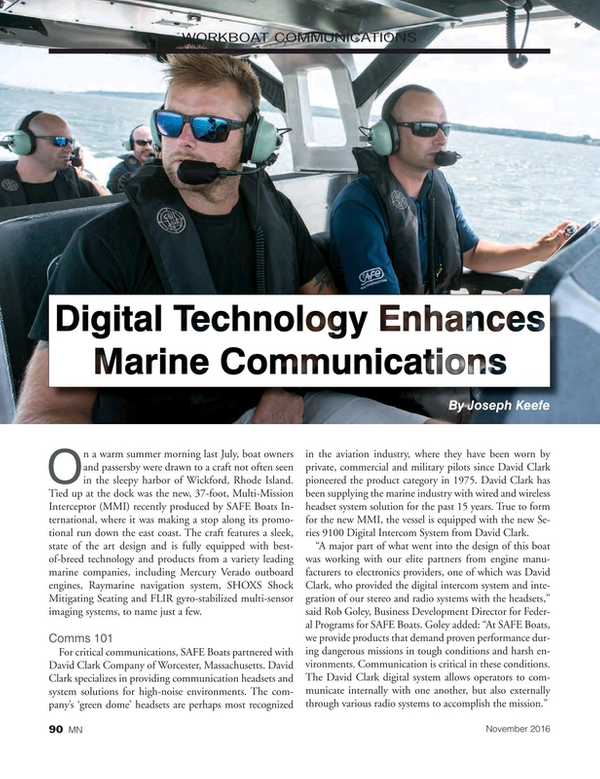