In the challenging waters of South American rivers, tugboat owners began ordering Vesconite’s proprietary thermoplastic rudder bushings starting in 2014. Convinced that the material – which is wear resistant, self-lubricating, environmentally-friendly, requires no grease, and easy to machine and fit – was more suitable than the bronze that has traditionally been used in the application, many firms have permanently made the change. Today, that move is paying dividends.
These companies include large South American mining and agriculture companies, which own their own barges and transport their own cargo. “The Parana River is one of the large water highways in South America,” Leandro Panzini of VesArg, the Argentinian distributor of Vesconite products told Marine News last month. He adds, “Towboats push barges on the inland waterway, which can be tough and abrasive on boats.”
Vesconite and Panzini both hope that there will be a significant rudder bushings market in the area in the near future, as many fleets upgrade their equipment. Already, though, local South American customers include prominent local operators such as Interbarge, Ultrapetrol, Lógico Paraguay (a Louis Dreyfus division), Cargill and Naviera Chaco (an ADM division).
It is a particularly important market for VesArg since river waterways are important arteries via which large cities in South America are linked together and each of these towboats could have four, six or eight rudders and two, three or four propellers. Having introduced the rudder bushings to tug boat owners on the Parana River, the intention is to introduce the product to operators on the waterway in Colombia. “We are currently testing the product in Colombia, which has a smaller water highway and usually has smaller boats operating on it,” said Panzini, adding, “We also intend to introduce Vesconite propeller shaft bushings to the South American river-transport market.”
Difficult Conditions, Appropriate Solutions
The South American rivers in which the tugboats operate tend to be wide and deep, and not dissimilar to the Mississippi River in the United States. The rivers also tend to have significant quantities of suspended debris and sand, which makes the water highly abrasive, and results in rudder bushings having to be replaced more frequently than they would be on traditional boats. “This set of conditions makes Vesconite bushings particularly attractive, since they are exceptionally hard wearing,” says Panzini.
The Colombian waterway in which the bushings are being tested currently tend to be even more abrasive than the Parana River, and successful testing of the bushings on this River will, says Panzini, demonstrate that Vesconite is able to cope in the most uncompromising of environments.
Vesconite Rudder Bearings
Vesconite is an internally-lubricated bearing material that is environmentally friendly. It is designed for low wear and minimal maintenance. It is also dimensionally stable, with negligible water swell and a low thermal expansion rate, and carries loads of up to 30MPa. Vesconite has obtained approvals from ABS, Biro Klasifikasi Indonesia, Bureau Veritas, China Classification Society, China Corporation Register of Shipping, DNV GL, the Korean Register of Shipping, Lloyd’s Register, Nippon Kaiji Kyokai, and RINA.
Vesconite Bearings, the maker of Vesconite, has warehouses in Johannesburg, Texas, the UK, the Netherlands and New Zealand, with stocking distributors in Australia, Singapore and Argentina. Vesconite rudder bearings are in use globally in a range of rudder types and configurations, including upper and lower pintle bushes, steerable propellers, flap rudders, efficiency rudders and space rudders. In particular, Argentina is proving to be a significant market for the company’s marine products.
(As published in the November 2016 edition of Marine News) 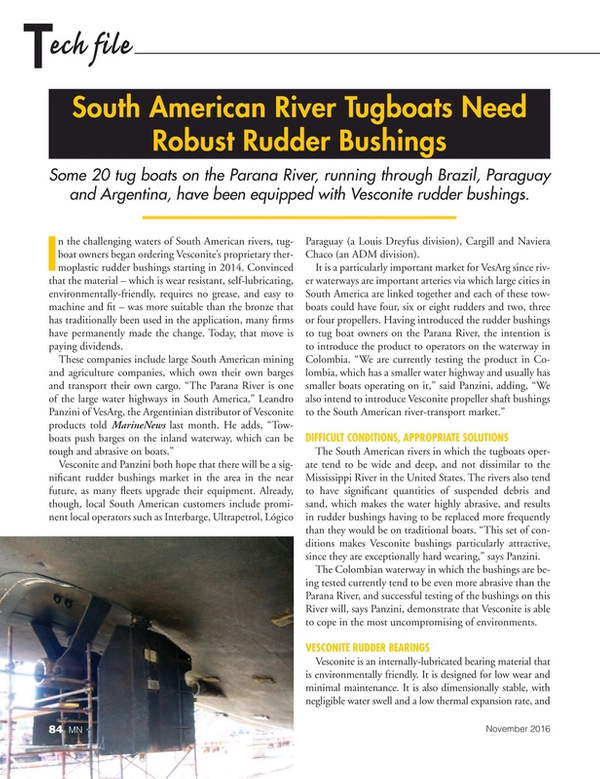