How does a tugboat operator with over 26 vessels used in docking, escort, ocean towing and articulated barge service get control of maintenance issues? In this case, by switching to Klüberplex BEM 41-132 grease to lower operating temperatures between 2 and 10 degrees Fahrenheit (3.6 and 18 Celsius), which significantly extends grease and bearing life.

The tugboat business’ success depends on the reliability of their assets and the ability to provide superior customer service. In addition, this operator has a strong safety culture and promotes preventive maintenance as a method of achieving their business objectives. The right lubricant is often a key component in that particular equation.
Questions reveal shaft-bearing lubrication issues
Four tractor tugboats in the operator’s fleet are 91 feet in length and are propelled by two stern- mounted Z-drives. The diesel engines, however, are located close to mid-ship, requiring a long drive shaft connecting the power output to the upper gearbox of the z-drives. Supporting the drive shaft are spherical double row bearings, in pillow block housings.
The operator experienced bearing failure and high operating temperatures in the shaft support bearings. In September of 2016, they approached Klüber Lubrication to recommend a bearing grease that would improve the performance of these bearings.
Before making a recommendation, however, key questions were asked, such as:
High-performance specialty lubricant provides solution
The recommended solution was Klüberplex BEM 41-132 grease. With a base oil viscosity of 130 cSt, which lowers the bearing operating temperature, the product therefore extends grease and bearing life. The product has excellent EP and AW additives that protect the bearing at start up and when shaft RPMs are slower.
Notably, this recommendation was based on experience with Klüberplex BEM 41-132 in other industries where similar performance requirements were demanded. To validate the recommendation, an analysis of the bearings and operating conditions was performed using the Klüber Lubrication Bearing Workbook.
First, an analysis was completed using a Klüberplex product with a similar base oil viscosity as the previous grease. A second analysis was completed using Klüberplex BEM 41-132. Because the shaft rotation ranges from 0 to 1600 RPMs, a value of 800 was used in the calculation to estimate how the greases performed at the mid-point of the speed range. The key indicator was the V/V1 factor. This is an indication of internal friction and thus heat generation. A number below 4.0 is recommended and is achieved with the recommended grease while the existing grease exceeded this number at the midrange of the RPM. At full rotation, Klüberplex BEM 41-132 slightly exceeds the recommended target, while the previous product was estimated to be over 9.1.
In addition, a Klübermatic Pro lubricant dispenser with electronic tie-in to the control board of the engine was proposed to ensure the bearings are greased at the appropriate frequency and amount. The lubricant dispenser can be mounted up to 5 meters away from a lubrication point and additionally can serve up to six lubrication points.
Longer life, lower temperatures benefit tugboat shaft bearings
In January 2017, the tugboat operator reported that Klüberplex BEM 41-132 had been filled into the test vessel’s bearings and had experienced two months of operational time without any bearing failure. Grease relubrication was being conducted manually per the recommended re-lube schedule provided by Klüber Lubrication. Bearing temperatures were reported to be between 2 and 10 degrees Fahrenheit (3.6 and 18 Celsius) lower than previous readings.
As a result of the successful trial, Klüberplex BEM 41-132 was filled in the pillow block bearings on the other three vessels of similar design. Furthermore, while this project focused on the four vessels that had long drive shafts, the tugboat operator has indicated they will convert all pillow block bearings on their other tugboats to Klüberplex BEM 41-132. Installation of Klübermatic Pro lubricant dispensers was also considered.
At Klüber, solving problems and improving performance with specialty lubricants is what we strive for. This application for shaft bearings is a good example of how we approach lubrication opportunities and the types of results that can be expected by marine operators. That’s because today’s operator looks forward to – and demands – more savings due to less maintenance and less risk of operational downtime resulting from lower shaft-bearing temperatures. With Klüberplex BEM 41-132 grease, all of that is possible – and more.
The Author
Ben Bryant is the marine market manager, Klüber Lubrication North America NA LP. Bryant is a graduate of the Massachusetts Maritime Academy.
(As published in the November 2017 edition of Marine News) 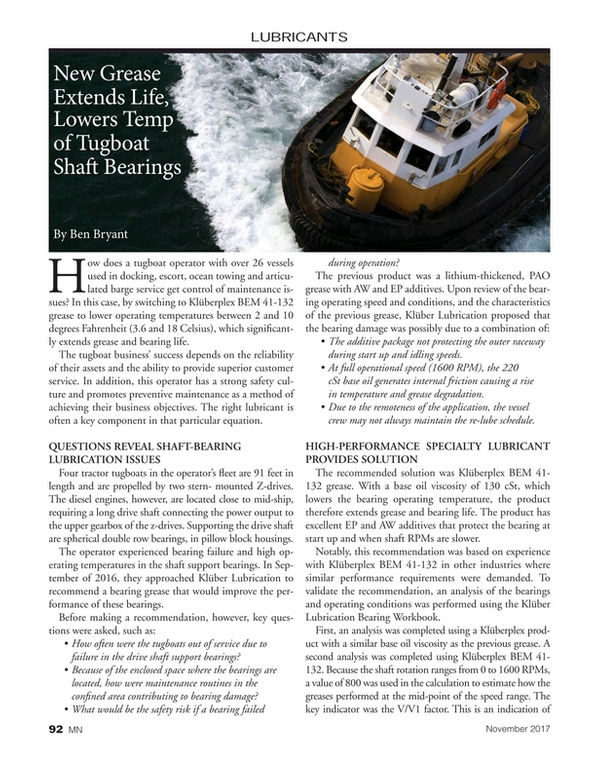