The R/V Sikuliaq, the Alaska Regional Research Vessel (ARRV) operated by the University of Alaska Fairbanks, boasts the latest in cutting edge electric deck machinery that was engineered and manufactured by Rapp Marine. Rapp Marine served as the Scientific Handling Systems Integrator on the ARRV project. In order to effectively operate and conduct surveys in subzero climates, Rapp Marine designed a flexible suite of winches and handling equipment that is designed to lower and raise ROV units deep into the frigid, Arctic waters.

Baltic Room Over-the-Side Handling Gear
A Load Handling System (LHS) which works together with the CTD and Hydro winches, which are capable of Electric Active Heave Compensation. The LHS System is configured to deploy scientific equipment over-the-side through the Baltic Room door on the starboard side of the vessel and is rated to handle a maximum working load of 11,100 lbs.

Hydrographic\CTD AHC Electric Winches in the Baltic Room
The combined system consists of both Hydrographic and CTD winches. The arrangement will allow both the CTD and Hydro winches to be capable of leading over the side via the Baltic Room System, or to the aft deck via the flag block to starboard at the aft end of the hangar. The primary routing for the CTD will be over the Baltic Room hydroboom and the primary routing for the Hydro winch shall be to the aft deck through the flag block to starboard on the aft end of the hangar. From the flag block, the wires shall be capable of leading to the stern A-frame or to the hanging block on the starboard knuckle-boom crane.
The Hydrographic winch has pull of 11,000 lbs and wire capacity of 33,000 feet of 0.322 EM cable or 26,000 feet of 0.375 EM Cable. A bolted Lebus shell and Rapp electric level wind system that can automatically adjust to the cable diameter without having to change any mechanical component when the drums are changed out shall be provided for the winch

PTS Pentagon R Computer System
Rapp Marine provided the PTS-Pentagon R computer system for the Oceanographic Traction, Hydrographic, and CTD Winch System. The system monitors and controls the speed, line pull, power/amp and wire length as well as Active Heave Compensation of all winches. Logging of each sequence according to user specification is integrated in the system. Each winch has local controls on the winch as well as controls in the Winch Control Room.
Currently, Rapp Marine is supplying equipment to 8 new research vessel projects. 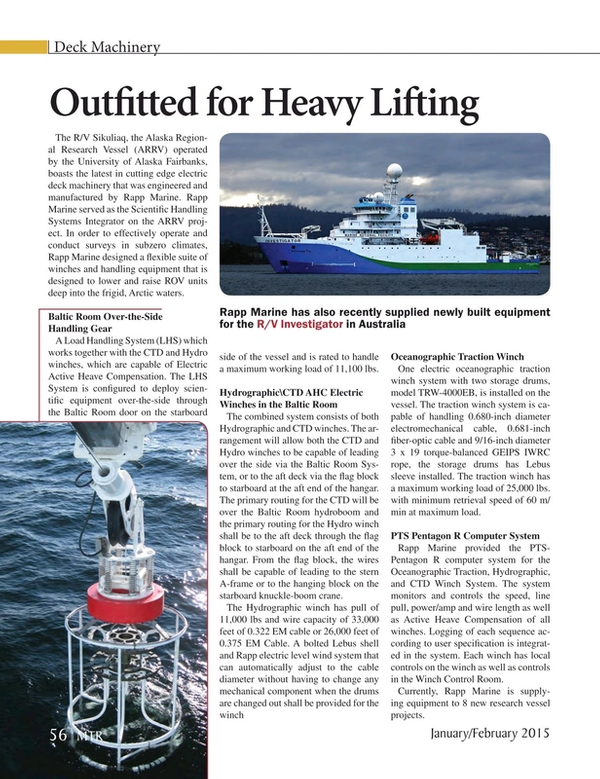