The evolution of capable Remotely Operated Vehicles (ROVs) moves in tandem with a burgeoning array of missions available. This month MTR spoke with Matt Bates of Saab Seaeye, Chris Gibson of Videoray, and Alasdair Murrie and Peter Ranelli from Teledyne Marine Systems for their insights on the market moving forward.

Describe the trajectory of ROV use over the past five years.

Bates, Saab Seaeye We have found a growing demand amongst operators in the oil and gas industry for ROVs with greater work and survey capability. This has led us to extend our range into larger and more powerful work-capable electric ROV systems that can undertake a wider range of tasks. Another trend is the growing use of ROVs in sectors such as renewables, marine science, defense and hydro – all of which are attracted by the technological sophistication of today’s underwater vehicles and their potential for customization and ability to undertake a wide range of complex and demanding tasks.

Gibson, Videoray When we created the microROV market starting about 15 years ago, almost everyone in the industry was convinced that a vehicle as small at a VideoRay could not be useful in “real” work.  It is very similar to personal computers, which were maligned by those using mainframes as “toys,” incapable of real contributions to business computing needs.
Along with our competitors we’ve proven that this was not only wrong, but micro-sized ROVS could not only replace larger vehicles – they could outperform them in rough sea conditions and delicate inspection tasks.  We see most of our customers using VideoRays to keep people as safe as possible, whether protecting divers from entering dangerous or challenging environments, or monitoring and inspecting harbors, infrastructure, and vessels. ROVs – especially those with additional capabilities such as sonar, additional cameras, positioning systems, and autonomous control – collect information that helps people understand and learn more about what is going on underwater.
A recent JIP with oil majors has determined that VideoRay ROVs can be used to inspect oil tanker ballast tanks, an environment known for being especially dangerous for manned inspections. Ports and harbors can monitor and inspect every vessel that comes in to make sure that nothing suspicious is entering unannounced. Critical infrastructure can be kept up to code with quicker and easier inspections.
The other reason for the industry’s success is the significant cost savings of using an ROV as opposed to traditional methods. ROVs have made it less expensive and much easier to conduct regular inspections, which has enabled companies to detect problems earlier and intervene faster before more damage can be done. Oil rigs especially benefit by using ROVs for UWILDs. Instead of learning about necessary repairs while already in drydock, repairs can be determined before the vessel is in port and prices can be negotiated.

Murrie & Ranelli, Teledyne Marine Systems Within Teledyne Marine Systems we focus on compact high performance ROVs. Our man-portable products at SeaBotix have seen strong growth in U.S. Navy use. Our larger systems at Benthos have been growing in infrastructure inspection applications, especially with high resolution sonars provided by Teledyne Blueview. In both lines we see interest in increased utility through advanced user interfaces, positioning and control systems. ROVs are becoming ever more capable and “smarter.”

How would you describe the maturity of the ROV market today?

Murrie & Ranelli, Teledyne Marine Systems The ROV market is both mature and still growing. In certain cases the utility of ROVs is well understood. But as offerings become more compact and affordable new users are entering the market. Also new sensors and payloads are making small ROVs more capable of “big” ROV missions that is presenting new opportunities for users who may not have the budget or facility to support a larger work class ROV.

Bates, Saab Seaeye Change is constant in the underwater market so I would not consider it mature. Driving this are changes in market forces, along with challenges posed by new areas of exploration and the emergence of new technologies. All of which continually reshape the design and function of vehicle systems and the expectations of users.

Gibson, Videoray  There are many different applications for ROVs and we approach each of them differently. Therefore, you have to look at market maturity vertically by application and even the job task in certain situations. For example, the market for ROVs in the Offshore Oil & Gas market is mature, but there are new applications and capabilities where smaller, inspection class ROVs offer significant cost savings to operators and service companies. Additionally, new markets are forming, ROVs are now being used in offshore to minimize manned entries into confined spaces, specifically for ballast tank inspections.
Small inspection-class ROVs outfitted with UT gauges are being used to perform GVI and CVI inspections for special survey class inspections. These type of inspections offer a significant cost savings to the operator because they can be performed while the vessel or asset is in operation. Customers across all markets are evaluating and adopting smaller inspection-class ROVs due to significant cost savings they offer over traditional inspection methods. In many of our markets we are still in the early adopter phase of the product life cycle. We expect significant growth over the next several years as capabilities expand.

In your opinion what are the top one, two or three technologies that are driving the ROV market today?

Bates, Saab Seaeye The market wants their vehicles to be smarter, more versatile and fully capable. The technological challenge is to meet this comprehensive demand with the optimum range of vehicles at the lowest possible real cost.
Starting with smarter technology, what an operator wants is intelligent control that keeps a vehicle stable and on station, provides full and meaningful information, is easy to fly and has the best redundancy options possible.
In terms of versatility, operators want powerful vehicles that can undertake more tasks than ever before at the lowest cost. They are increasingly seeking more powerful electric work ROVs to take on the roles of hydraulic work vehicles to save money and offer greater flexibility. They also want vehicles that can meet the new challenges of working in difficult to access areas and in remote places accessible only to electric vehicle systems.
Finally, operators want comprehensive capability in a vehicle, with the control architecture, power and stability that will allow them to fit a wide range of sensor systems and tooling options ready to undertake the widest range of tasks in a single vehicle.

Gibson, Videoray
Two or three years ago I would have discussed, speed, depth, stability, and camera technology.  However, we’ve set standards on all these that are sufficient to exceed most of our customer’s requirements.  Now, I believe the technology driving the ROV market further and faster is engineering “ease of use” into the system, no matter the size or capability.  With the introduction CoPilot, our autonomous control software from SeeByte for our ROVs, we have taken a massive step in the ease of use department.  It’s easier to make someone successful when they can just point and click to fly to a location or target when they might not be as strong of a traditional joystick ROV pilot.

When we discuss ROVs, we often discuss “getting the diver out of the water.” From where you sit, what are the main market uses for ROVs today, and how (or is) that changing?

Murrie & Ranelli, Teledyne Marine Systems
ROVs in our segment of the market are well suited to defense and security missions such as port security and explosive ordnance disposal. They are also of utility in infrastructure, such as bridge or dam, inspection and emerging commercial segments such as offshore renewable energy and aquaculture.

Gibson, Videoray
Although ROVs used to be considered just “eyeballs under the water,” they have become a quick, easy, and inexpensive way to collect as much information as possible. As the ROV’s capabilities continue to expand to include new sensors, such as sonar, positioning systems, additional cameras, autonomous control, laser scalers, and radiation detectors, the more useful the ROV becomes to its operator. By collecting this information remotely, it reduces the need for divers to get in the water to collect it manually.
We have always felt that an ROV is the perfect complement to a diver and not meant to replace them – except when the situation has potentially fatal consequences. Pre-dive surveys allow divers to get an idea of where they are going and what they need to do, which ultimately reduces the risk that divers face during deployment. Once they are in the water, ROVs can be used to monitor diver activities and ensure their safety in any environment.
One prime example of removing the human element is removing them from internal vessel ballast tank inspections.  One look at the inside of these dark and dangerous mazes and you would be puzzled as to how humans could have ever safely inspected these.  The VideoRay ROV offers the perfect tool to safely and efficiently perform internal ballast tank structures while the vessel is in service, in a cost effective manner, while remaining in compliance and saving lives.

Bates, Saab Seaeye
ROVs play a widely diverse and changing role in the undersea world, with operators constantly discovering new applications that exploit the technology to its utmost, while also adapting vehicles in a unique way to solve new problems. And as electric ROVs become more powerful and the systems become more sophisticated, they are increasingly being used more extensively for survey and work class applications.  At Seaeye’s traditional end of the market asset inspection and diver support still play a big role, particularly in shallow waters.

How is your company investing today in ROV technology?

Gibson, Videoray
We’re developing much deeper systems, with more modular configurations.  These may be used as fly outs, or on garages.

Bates, Saab Seaeye
We have invested in an overarching system we call our Technology Toolbox. The concept distills our core technology across all products into a common architecture to create the lowest number of parts at the least possible cost for the highest possible performance and quality.

Big picture, what signs or indicators do you monitor to gauge the future direction of the ROV market? What are those signs/indicators telling you now?

Gibson, Videoray
The indicators we look at are how much is being done (or should be done) underwater, and how much can be done more effectively by our technology.  The lower price for oil is generating a considerable interest in getting the tasks that are currently done by work class vehicles done more efficiently and therefore much cheaper.  We expect to have a major role in that.

Murrie & Ranelli, Teledyne Marine Systems
The ROV market, especially for compact units, is diverse and there is no single indicator that stands out. Oil and gas activity is clearly driven by the price of oil and operator capital spending. Currently the outlook for this sector is mixed. Large projects seem to be at risk but a focus on cost controls present opportunities for low-cost high value offerings to grow. Defense and local government activity can respond to predictable budgets or emergent events. This picture is also mixed, with much defense spending currently focused outside the Naval domain. But global markets, especially in the Pacific, continue to face marine security and management challenges and should provide strong opportunities for the future.

Bates, Saab Seaeye
While the oil and gas market is facing challenging times the demand for vehicles to support offshore production and carry out IRM continues. We anticipate investment will focus on economically effective ROV solutions that offer the greatest capability for the lowest real cost. However, in the longer term we see extraction going deeper and into more difficult to access locations, and have we have the technology to meet these challenges. 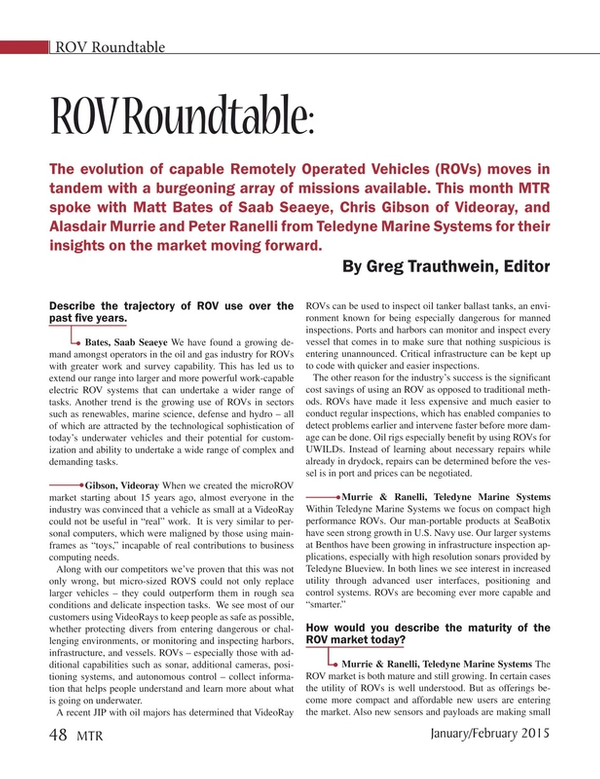