Deep-sea trenches represent one of the most extreme marine environments in the world. Although a subject of fascination for many scientists and ocean explorers, until relatively recently, they remain virtually unexplored due to the technical challenges in operating instruments and collecting samples at these extreme depths. Recent advances in underwater vehicles, image capturing and sampling technologies are increasing the opportunities for researchers to observe and uncover the mysteries of the deep. A team of international deep-sea scientists and engineers have embarked on a mission to build novel robots to explore and retrieve intact samples from the deepest parts of the ocean in a bid to discover how life is sustained thousands of metres below the ocean surface.
It was only in the last 50 years that advancements in technology have highlighted the importance of deep-sea environments in the carbon cycle.  Deep-sea sediments represent an important compartment of this process - as organic matter settles onto the seafloor, it is either mineralized or buried into the sediment. One of the major challenges obstructing deep-sea research is inability to collect the samples required to understand biological processes at these extreme depths. Organisms that survive extraction from their natural environment do not necessarily considered important, while others are inevitably affected and typically killed due to changes in pressure.
While exploration of these zones has presented a challenge to scientists for decades, it is considered necessary to investigate the unexplored trenches and their specialised microbial communities to understand how organisms function at extreme pressures and what role they play in the global carbon cycle.
The ‘Hades‘ project – Benthic diagenesis and microbiology of hadal trenches (ERC Advanced Grant), aims to provide the first detailed, combined analysis of benthic diagenesis and microbial ecology and diversity of some of the deepest oceanic trenches on Earth.
An international team of researchers, led by Prof Ronnie N Glud from University of Southern Denmark (DK), and including scientists from Max Planck Institute for Marine Micribiology (G), Scottish Association of Marine Sciences (UK) and the University of Copenhagen (DK), will take the innovative step of studying and sampling deep-sea organisms in their own environment (in-situ).  To achieve this, the Hades project requires two purpose-built robots, a profiling lander and sediment sampler (which will have two different modes), to operate at depths of up to 11 kilometres in cold, corrosive conditions, withstanding pressures reaching 1100 bar. Various components for the new robots are being produced around the world before finally being assembled at University of Southern Denmark.
Prof Ronnie Glud explains, “We argue that deep trenches, some of the most remote, extreme, and scantily explored habitats on Earth, are hotspots of deposition and mineralization of organic material. With the development of innovative, autonomous in situ instrumentation to overcome large sampling artifacts from decompression, we will i) determine rates of benthic metabolism and the importance of the deep trenches for the marine carbon and nitrogen cycle, ii) explore the unique benthic microbial communities driving these processes, and iii) investigate the proposed great role of virus in regulating microbial performance in hadal sediments.“
Previous expeditions such as the Mariana Trench in 2010, have revealed surprisingly high levels of biological activity at nearly 11 kilometres deep. The Hades project now aims to investigate how life is sustained at these depths and how its activity affects the biogeochemical functioning of the oceans and the Earth.
In the Pacific Ocean, three trenches have been selected based on the different nutrient conditions in the overlying surface waters and different physical-oceanographic conditions, influencing the volume of organic matter at each site: the Atacama Trench off Chile (max depth 8068 metres), the Japan Trench, south and east of Japan (max depth 9,504 metres) and the Kermadec Trench north of New Zealand (max depth 10,047 metres).

Sampling the Hadal Trenches
Each robot will be built to perform a particular task - one robot will be designed to quantify the oxygen uptake by the sediments. A second will investigate alternative anaerobic (i.e. oxygen free) processes that may be used by sediment organisms to convert the organic material (e.g., nitrate or sulfate for respiration).  The third robot will be designed to collect sediment samples to be brought to the surface. This instrument will ensure the sampled microorganisms are fixed in-situ and can be retrieved without being modified during sample retrieval.
The sediment O2 uptake, determined from concentration profiles, provides an excellent proxy for the turn-over of organic material in marine sediments. During a previous cruise, the team used a profiling lander consisting of an electronic cylinder housing, capable of carrying up to 11 micro-sensors (oxygen and resistivity). The electronic cylinder with the sensors was moved in steps of 100 - 250µm across the sediment-water interface into the seafloor, down to a depth of approximately 15 cm. After the vertical profile was finished, all sensors were moved back to the start position. The electronic cylinder was then moved horizontally and the vertical profiling started again. This procedure enables the measurement of >100 profiles along a 40-cm transect per deployment.
“We used a “Benthic Profiling Ultra-Lander System” to perform high-resolution oxygen concentration profiles down to a depth of 11,000m. The prototype has demonstrated proof of concept, but has also given us experience that needs to be implemented for a more reliable performance. This includes new designs of gearboxes, vertical and horizontal instrument sledges, pressure compensation units, as well as the integration of batteries, specially designed buoyancy and acoustic releasers.“ Said Glud.
The “Autonomous Sediment Sampler and Injection Ultra-Lander System” will be able to either collect sediment cores or to inject tracers and fixation fluids. The latter will be used to study process rates or to preserve active microbial cells directly at the seafloor. The instrument design will be based on the traditional dampened coring principle of multiple corers and an injection lander providing high quality samples that remain mechanically undisturbed and guaranties a safe recovery of the lander.
Dr. Frank Wenzhoefer, of Max Planck Institute for Marine Micribiology, Bremen (Germany) explains, “Four core liners will be driven into the sediment by individual motors. When the core liners are retrieved, core catchers seal the liners at the bottom. The new instrument is an essential “work-horse” that, cost efficiently, will provide sufficient, mechanically undisturbed hadal sediment samples. For in situ incubation or fixation of sediment samples, the core sampler will be additionally equipped with an injection module. This will enable injection of substrates or fixatives along a central vertical trace in each core. For incubations, the instrument will remain at the seafloor for a preprogrammed duration.“
Using labeled substrates the system will be used for in situ quantification of transformations of nitrogen, sulfur and organic substrates, while also enabling the in situ injection of fixatives for subsequent microbial investigations and quantification.

The Engineering Challenges
Such lander systems have been used to water depths of 6000m, however the technical challenges and the fact that only 2% of the seafloor is below 6000m have, so far, limited scientists abilities to work at such great depth.
The high hydrostatic pressure, the corrosive environment and the fully autonomous operation of the systems are design issues engineers must face when building these systems. Electronics will require storage in pressure housing with high-pressure resistance connectors. Additionally, connectors for microsensors must have a high electrical impedance. Moving parts, like vertical and horizontal sledge systems, will also have to work properly at this high pressure as well as requiring all electrical and mechanical components to work autonomously.
“The most difficult aspect is the high hydrostatic pressure at which all components have to work and the fully autonomous operation of the systems - a proper lander-software is needed to control the working steps during the deployment. Furthermore malfunction of the autonomous operation would only be recognized after the recovery of the system, thus after several days of deployment.“ Said Wenzhoefer, “However, such lander systems will help, among others like video and photo-landers, to explore one of the last unknown and challenging habitats on earth. These systems can be used for further studies of microbial ecology and biogeochemical processes at numerous deep sea locations.“
By comparing trenches from contrasting oceanic settings the project provides a unique analysis of Hadal biogeochemistry and a deeper understanding of the role of deep trenches in the oceans, as well as fundamental new insights to the composition and functioning of microbial communities at extreme pressure.
Wenzhoefer explains, “The project is a great opportunity to enhance our knowledge on deep sea ecology and to explore so far unknown habitats of our planet. It is fascinating to deploy autonomous instruments at the deepest spots on earth and it is always an exciting event waiting for robots to surface, checking if everything worked properly and downloading the data or analyzing the samples. Within the new projects I am looking forward to discuss, design and operate new in situ technologies with our team of scientists, engineers and technicians all aiming for new ways to explore our planet.” 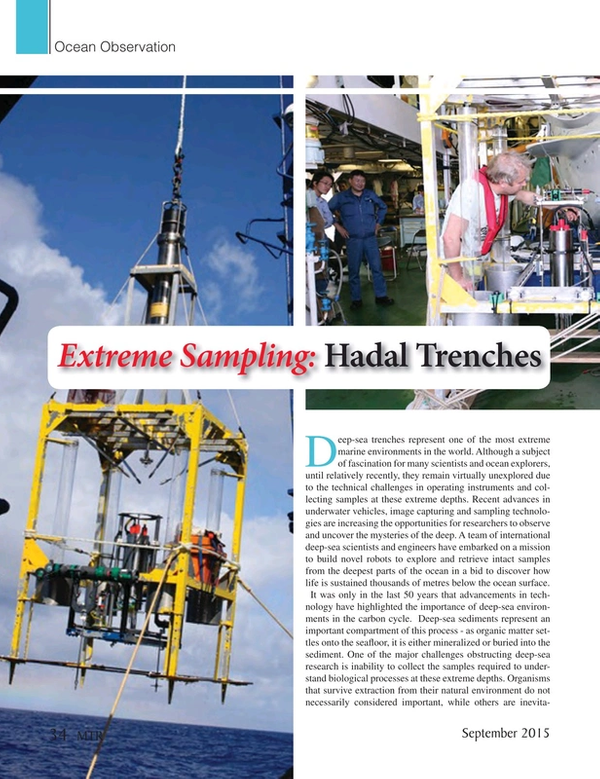