The tunnel inspected is approximately 9.8 km in length, with a 35 sq. m. area horseshoe profile. The purpose of the inspection was to collect data inside the newly-constructed tunnel for general assessment of rock stress incidences.

The tunnel was inspected internally with a Remotely Operated Vehicle (ROV) equipped with an array of sensors, including sonar and video, with the purpose of collecting full coverage data at the headworks and downstream to the powerhouse.  The ROV was specifically designed by ASI for this type of work and is unique in the world. This data was required for the client to undertake an engineering structural assessment of the tunnel and detect significant anomalies; such as deformations, major cracks, rubble, partial collapses and rock accumulations.

Within a short period of two weeks, and with very limited preparation time, ASI responded to the client’s request, mobilizing internationally to the remote location. To perform the inspection, ASI utilized its ASI Mohican ROV, which afforded ASI a quick response time. This system was specially designed by ASI for tunnel inspections and is controlled and powered from the surface, which allows the ROV to navigate through tunnels for unlimited periods of time.

In 1999, ASI obtained (and still holds) the record in the Guinness Book of World Records for the “longest flooded tunnel survey by an ROV” at a different location. 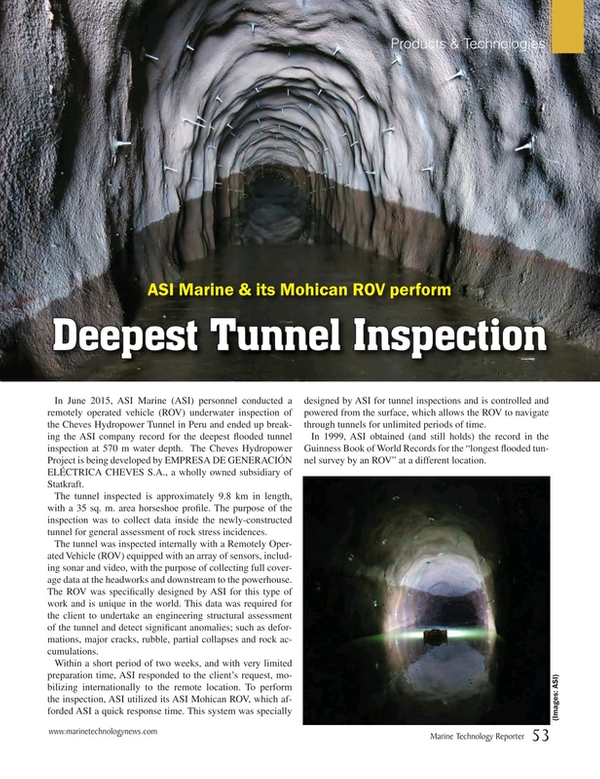