When the Dan Bravo Complex came on stream in 1972, the facility – Denmark’s first producing offshore oil field – was expected to produce for 25 years.

Now, thanks to a complex, multi-year subsea structural reinforcement campaign involving the installation of 136 tonnes of new steel, over more than 200 diving days, the life of the complex’s wellhead platform, Dan A, is expected to be nearly trebled to total 70 years when the work is finalized.

The structural overhaul of the Dan A platform’s jacket, undertaken by Dutch offshore contractor Boskalis, in close partnership with operator Maersk Oil, involved multiple firsts – beneath the waves.

The complex project, akin to a 3D, subsea puzzle, involved a large subsea photogrammetry campaign, site clean-up, preparation work and the installation of temporary cranes on vertical platform members to help maneuver the new steel into place at 10-41m water depth - all while the platform was in production.

The Subsea Services business unit of Boskalis, which was contracted for the installation, as well as fabrication, procurement, equipment testing and structural examinations, was also tasked with installing a new boat landing ladder on Dan B, and removing obsolete equipment from the Dan A and B as part of the Dan Bravo Rationalization (DABRAT) program.

“This had not been done before – fortifying underwater structures in this way on this scale,” says Captain Bert Kamsteeg, contract manager, Maersk DABRAT, at Boskalis.

Jakob Knudsen, DABRAT project manager, Maersk Oil, says: “Had nothing been done, the platform’s life would have been shortened.”

The Dan field was discovered in 1971, about 125 miles west of Esbjerg, Denmark. Dan A and C are wellhead platforms and Dan B is the process platform of the Dan Bravo Complex. These platforms were installed in the 1970s. The Dan Bravo complex had in fact been ordered from the US for the Kraka field, but it was installed on Dan when Dan was found to be larger.

Boskalis’ involvement in the DABRAT project started early in 2013, with preparation work starting that February. The main scope was to reinforce Dan A’s jacket, using 10 clamps, called K-node clamps, and to install a new conductor guide level – both of which would require carefully maneuvering 15 pieces of up to 4-5-tonne sections of fabricated steel through slots in the platform’s structure, guided by divers.

The first challenge was mapping the existing structure, which, over the years, had been extended by assessing existing inspection data and acquiring new data. In July-September 2013, a huge photogrammetry exercise – the largest ever of its type - was carried out beneath the waves. Subsea, air and saturation divers first marked out the structure, using 3,000 magnetic, coded markers, and then some 20,000 high-definition, overlapping photographs were taken over a 70-day campaign. The photographs were then converted, using computer software, into an exact geometric 3D model, using the information from the markers, from which the K-nodes and conductor level guide could be designed.

Next, inspection work, surface cleaning and preparation work had to be done, including underwater grit-blasting and measuring member wall thickness, prior to installation work, all while having to contend with some unfavorable weather conditions and sometimes reduced subsea visibility.

“In winter 2013/14, steel fabrication started in Denmark and an intense planning period, setting out preparation and procedures for execution, started, ahead of the big challenge - the installation work,” says Kamsteeg. “Divers do not do this kind of work very often. A lot of risk assessment studies and training were done.”

One of the challenges was how to transfer the steel from the ship to the position it needed to be in, beneath the platform, underwater. “The platform had a small 2.3-tonne capacity crane, but the steel weighed in subsea conditions in some cases 4-5-tonnes,” says Kamsteeg. “One of the solutions, and actually the only sensible solution, was to build up two temporary cranes, 12m above sea level, on to the vertical members of the platform, something which has not been done before. This itself was a challenge, first having to install a clamp with a pedestal on to the vertical member, and then building up a conventional knuckle boom crane on to it - which itself first had to be dismantled into 2-3-tonne pieces in order for the platform crane to be able to lift them.”

Two cranes Boskalis already had on vessels in its (offshore) fleet were used, and modified so they could be remote controlled  from the dive support vessel (DSV), to avoid having to procure new cranes, avoiding any possible procurement delays.

Installing the temporary cranes meant steel could be lowered from one of the two DSVs used (the Protea and Constructor), then connected to the temporary platform crane’s hoist wire, before being disconnected from the DSV’s hook by divers and maneuvered into place assisted by divers subsea and rope access personnel at the platform.

The K-clamps were created to reinforce areas of the jacket structure where a horizontal member is intersected by cross members. Each clamp comprised of two sections to create a steel-to-steel friction clamp, which is held fast using steel bolts, weighing 10 kilos a piece. To install the 10 clamps, some 2,000 bolts were used, each having to be handled and set by the divers using specially-built hydraulic tensioning gear and a specially designed tool basket was used for handling the bolts and nuts subsea.

In connection with the maneuvering in and then installing the new conductor guide level the main section of the new level, measuring 3m-wide and 8m-long, needed to be lowered, tilted, and slotted through the platform members before being brought back on to the horizontal and lifted into place, before being bolted into place using further sections of steel.

This was all at about 13m below the surface, with more than a dozen “handshakes”, switching hooks, switching from the DSV hoist to temporary crane and again to the temporary air hoists, switching hooks again. Co-ordination above and below the water line, between divers, rope-access workers and the dive supervisor, whose only vision link to what was happening in the water was via a camera on the diver’s helmet and video from observation class remote operated vehicles (ROVs) was crucial.

“We knew we had to get it in position in between the six existing conductors. We had to fly it in vertically in between the two rows of conductors then flip it horizontally, and fit the out rigging to the vertical members of the platform. Then we had to lift it in to place fixate the bellmouths to the conductors and bolt it down. It had to be built up from all the pieces of steel to get it into place and in its proper shape to it would support the platform itself.

“Everybody has to wait all the time for the other to be in position or ready. We had two divers in the water, who needed to be in the right position at the right time and they needed to have the right tools at the right time. It is almost like a computer game with various sensor inputs. In our contingency planning we expected to do it in two weather windows. We actually did it in one.”

Once the new conductor guide level was installed, the old levels were removed. As part of its scope, Boskalis also replaced a number of anode bracelets, which also involved significant inspection, cleaning and preparation work, including removing marine growth, grit-blasting, and taking measurements.

The final part of the 2014 offshore campaign was removing the temporary cranes before the winter season.

When the project is finalized the result is a comprehensive makeover of the facility below the water, says Knudsen. “The impact on Dan A, achieving a lifetime extension to 70 years in total, is quite an achievement.”

The 2013-2014 campaign was also an HSE success. Over the 200-day offshore campaign, there were no lost time incidents, a testament to onshore planning, preparation and onshore rehearsal of many of the steps due to be undertaken offshore, says Kamsteeg.

“The planning and preparation was key,” adds Knudsen. “We did as much as we could onshore. Once you go offshore there’s a high cost involved, every minute is a lot of dollars. We have had more than 200 diving days over the last two years.”

The project has happened in close collaboration between the Subsea Services business unit of Boskalis, which set up an office in Esbjerg for the project, and Maersk Oil, including at least one face to face meeting each day. “The project couldn’t have been done without this close working relationship,” concludes Knudsen. 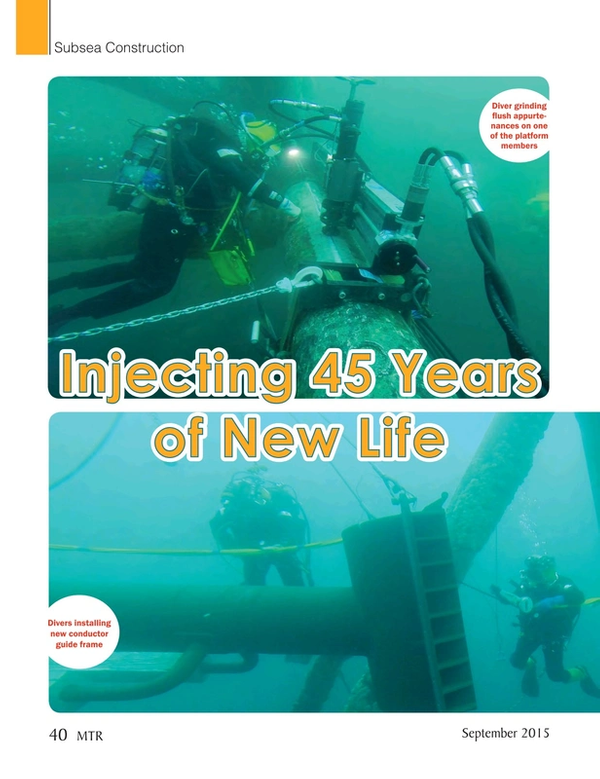