Surface currents in the upper 1 ocean are very important in driving the fate of marine debris and pollutants but are also challenging to measure. Tracking the upper ocean in an effective manner may require massive deployment of GPS tracked drifter buoys, which until now were expensive, cumbersome and quite polluting themselves (i.e. made of PVC, ABS and Nylon). The CARTHE drifter is an answer to the need for a compact, user-friendly, robust, yet eco-friendly solution. Scientists with the Consortium for Advanced Research on Transport of Hydrocarbon in the Environment (CARTHE), in collaboration with the ocean engineering company Bellamare LLC, spent two years testing different structures and materials to develop a practical, cost-efficient and biodegradable drifter design. The CARTHE drifter is the first environmentally-friendly drifter ever designed with 85% of its components being biodegradable in seawater. Calibrated at the University of Miami’s SUSTAIN wave-tank facility, the low cost, small form factor instrument weights 4 kilograms standing at only 70 cm high when fully assembled. It comes in an easy to assemble, three components, kit to reduce storage space during shipment and deployment at sea.

Ocean plastic pollution is a rapidly-emerging global crisis. Several million tons of plastics are discarded into marine environments every year and accumulate in oceanic regions. Petroleum based plastics have a very low biodegradability and stay in the marine environment was long periods of time (probably hundreds of years). The quantities and durability of plastics debris in the marine environment are some of the unforeseen consequences of the qualities that made these polymers so ubiquitous in our everyday life. Plastics are now representing 60% to 90% of marine debris and have worldwide documented harmful effect on marine biota. These facts directed design efforts toward a biodegradable, strong, easily workable and readily available material. The answer seems to be found in the recent advances in biochemistry, which have produced new biodegradable polymers. Notably, polyhydroxyalkanoates (PHAs), were discovered to be non-toxic and biodegradable thermoplastics.
PHAs can be produced by engineered bacteria fed with corn sugar inside large fermentation tanks. Like mammals store fat, these bacteria store excess energy from sugar into PHA, which is later extracted. PHA products were of particular interest to our drifter design because not only they were readily available but also had met the American Society for Testing of Materials (ASTM) standard for biodegradability in the marine environment. According to ASTM biodegradability definition, any biodegradable plastic should be ‘‘capable of undergoing decomposition into carbon dioxide, methane, water, inorganic compounds or biomass in which the predominant mechanism is the enzymatic action of microorganisms, that can be measured by standard tests in a specified period of time, reflecting available disposal condition.”
PHAs being thermoplastics with strong mechanical properties similar to other commonly used plastics seemed very well suited for the construction of sacrificial oceanographic instrumentation. PHAs also have the required qualities for industrial injection molding, an industrial technique allowing for fast production of large quantities of pieces. In particular, the use of injection molding allows for the fabrication of large quantities with very low overheads in record time, thus reducing the price of the instrument and increasing large volume availability.
The instrument is activated by a magnetic switch and can send its position every 5 minutes for a period of up to 3 months with meter accuracy using very-low cost GlobalStar Simplex telemetry systems. The client can receive the data in real-time through the Pacific Gyre LLC website, the official distributor of CARTHE drifters.
Moreover, the “drogue-less” torus float can be deployed alone for surface oil slick tracking purposes. An air-dropped version, using a biodegradable parachute, is coming out next year to increase the deployment capabilities of the instrument.
Typical applications are physical and biological oceanography, search and rescue missions, marine pollution tracking, as well as surface current monitoring for the offshore industry and the Navy for purposes of navigation and operational risk reduction. More than 1,500 of these drifters were recently deployed in two large scale experiments (named LASER and SPLASH) conducted by CARTHE to study the upper ocean processes that control the transport of hydrocarbons in the environment. The CARTHE drifters have also been used in various projects from sea turtle research to Arctic research in the Bering Sea, as well as source pollution monitoring in inlets and Port of Miami.
The CARTHE drifter is manufactured by GreenWave Instruments LLC (Miami) and distributed by Pacific Gyre LLC (San Diego). The CARTHE consortium is funded by the Gulf of Mexico Research Initiative (GOMRI).
Specifications:
Telemetry: GlobalStar Simplex
Position: Every 5 minutes
Battery: 6 Volts Alkaline
Battery Life: Up to 3 months
Material: PHA biodegradable plastic
Deployment: Magnetic switch activation
Size: 70cm tall x 38cm wide
Drogue mid-depth: 40cm
Float: 38cm diameter torus
Weight: 4 Kg in air
Assembly: 3-part kit
(As published in the September 2017 edition of Marine Technology Reporter) 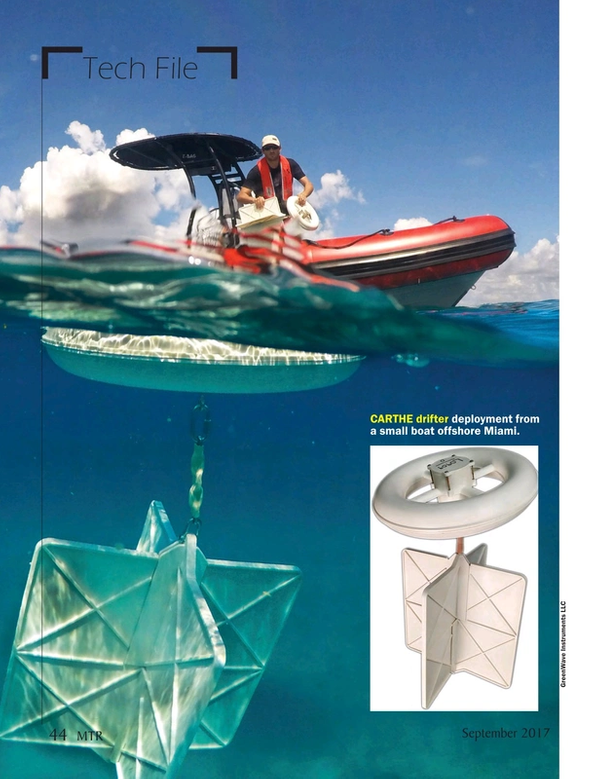