In August, the Maritime Labor Convention (MLC) of 2006 came into force, bringing a consolidated legal framework governing the rights of seafarers. What that means depends on what flag state that a mariner sails under. And, even if a particular nation hasn’t ratified the code – such as the United States, for example – the implications might still be the same. Indeed, the first ship detention has already been reported. The Convention introduces many things that yesterday’s seafarers could only dream about. Nevertheless, MLC will be a two-way street; for mariners and shipowners alike.
The new rules are sufficiently ambiguous that compliance, in many instances, is left open to the interpretation of those writing the local version of the rules. In general, life aboard the world’s 45,000+ deep draft ships ought to be getting better. Hence, a lingering shortage of qualified mariners will potentially afford seafarers the rare opportunity of being choosier about which ship they sail on. For shipowners, one thing is crystal clear: compliance with yet another global regulation is sure to impact the bottom line.
Our feature story in this edition centers on one of the more interesting and certainly the most diverse and aggressive business plans in the maritime industry today. Shane Guidry has Harvey Gulf International Marine on a course that promises to upend the conventional offshore support model forever. Introducing groundbreaking dual fuel tonnage loaded with state-of-the-art crew amenities (there won’t be any MLC violations here) and any number of innovative initiatives, Harvey Gulf is arguably setting the stage for the long awaited “flight to quality” and the “two-tier” Gulf of Mexico OSV charter market. How it all plays out could ultimately redefine who does business in this market, where they compete, and the manner in which the job gets done.
As operators (perhaps) prepare to ramp up creature comforts and extend better on board communications to their mariner employees as both a means to compliance and to attract and retain the best talent, seafarers themselves also have new responsibilities. That’s because no longer will mere compliance with baseline STCW requirements be enough for the privilege of going to sea. Increasingly, the concept of “performance-based assessments” is becoming the rule, rather than the exception. For many operators today, the practice of blindly hiring a mariner on the basis of documentation alone has come to an end. Markedly improved simulation training is at the root of all of that, and therefore has a prominent place in this edition.
Finally, and as piracy spreads from region to region like proverbial wildfire, the security of ships and supply chain also falls under the general heading of crew welfare. In this edition, we take on maritime security – at sea and ashore. In both cases, technology is the key to success in both venues. Finance, technology, innovation and corporate vision all come together in this edition of Maritime Professional, charting the way forward for a rapidly evolving industry. As you navigate your way within the pages that follow, see if you do not agree. 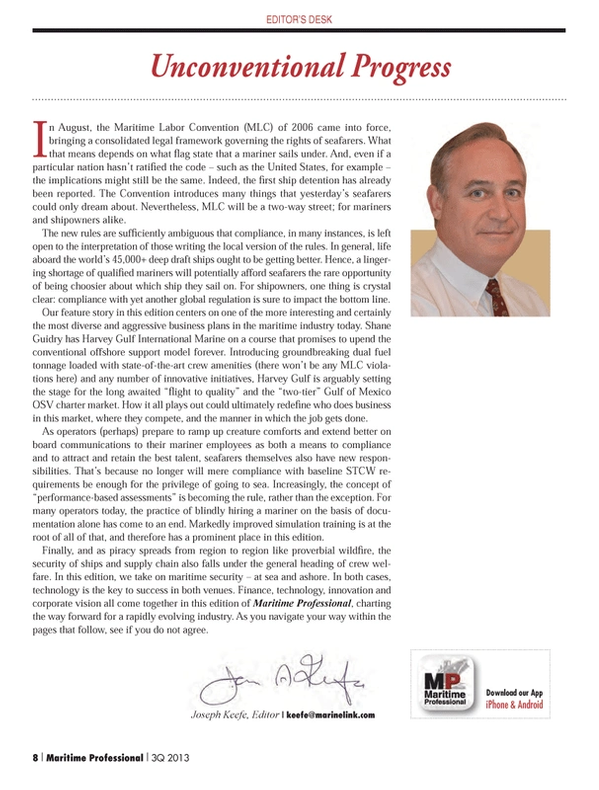