Workboat and offshore marine markets have been gaining strength over the past three years. A resurgence of oil production in the Gulf of Mexico has brought orders for new vessels, major oil companies are ramping up their presence in the region, and Gulf-oriented state governments are aligning to encourage offshore growth. Merger and Acquisition volumes have generally expanded in the US along with this growth as strategic companies seek to strengthen their positions in niche competencies (Figure 1). As always, a trickle of less strategic deals has materialized in response to opportunistic conditions such as regulatory changes and cases of financial distress.
A recurring theme in our quarterly studies of the marine deal-making landscape, particularly in North America, is the dominance of inland and offshore workboat markets. The graph in figure 2 shows the consistency and general outperformance of the inland/offshore public stock indices in comparison with other marine segments, and the S&P 500 this year. Despite continuous regulatory challenges, upward momentum in both domestic oil production levels and petroleum price levels are likely to sustain the positive trends for at least the near future.

Recent Deals in the Oil Patch
The first deal we examine is a strategic asset deal, as Genesis Energy L.P. (GEL) announced its acquisition of Hornbeck Offshore Services’ (HOS) fleet of oil-transport barges and tug boats for about $230 million in July. Genesis operates a fleet of inland barges and tugs, as well as terminal facilities and oil pipeline systems. The addition of the Hornbeck vessels adds to Genesis’ ocean-going capabilities and expands the company’s presence in the GOM, northeastern US and Great Lakes region, despite some customer overlap. Shares of publicly-traded limited partnership Genesis are up more than 30 percent since the beginning of 2013. Hornbeck’s shares are up more than 50 percent in the same period, and the sale of the transport vessels dovetails with the company’s strategic shift to focus on oil and gas exploration and production.
Order books for newbuilds have been strong this year. After acquiring Bollinger’s Bee Mar OSV operating company last year for $243 million, Harvey Gulf International Marine again made headlines in May with the signing of three agreements totaling $540 million for construction of 14 new vessels.  These and other orders will keep yards such as Eastern Shipbuilding Group in Panama City, FL busy for quite some time. LEEVAC Shipyards, another growing ship repair and building company, answered calls from their customers for a facility east of Lake Charles by acquiring the Quality Shipyards subsidiary of Tidewater, Inc. (TDW). The asset deal includes 35 acres on 2,500 feet of waterfront, four drydocks, several cranes and 100,000 square feet of covered production facilities.
Tidewater stock is up about 20 percent this year, and the company continues to focus on ownership and operation of its multifaceted fleet serving the worldwide offshore energy industry.  Tidewater crews operate more than 340 vessels, providing a wide range of services in support of offshore petroleum exploration, field development and production. In May, through a wholly-owned subsidiary, Tidewater entered into an agreement with HitecVision to purchase Norway’s Troms Offshore Supply AS (“Troms Offshore”). The acquisition will expand Tidewater’s global footprint into the Norwegian sector of the North Sea and supplement Tidewater’s experience and vessel fleet operating in harsh environments, including cold climates. The approximately $395 million deal implies a multiple of earnings before interest, taxes, depreciation and amortization (EBITDA) of 33X.
Another player that has been very acquisitive in building a marine energy presence is NGL Energy Partners (NGL), which most recently acquired the assets of Crescent Terminals, LLC along with Cierra Marine, LP and its affiliated companies. The Cierra Marine acquisition doubles NGL’s current fleet of tow boats and crude barges, while the Crescent facility adds 130,000 barrels of storage capacity by Eagle Ford shale in South Texas, and 20,000 barrels per day of capacity to reach markets along the Gulf Coast. NGL has logged about $1.8 billion in acquisitions since its 2011 IPO, including Corpus Christi boat and barge operator Third Coast Towing for $43 million in cash and Pecos Gathering & Marketing in a $45 million private placement.
Woodlands, Texas-based Arc Terminals has made at least six terminal acquisitions since 2007, and this year announced the acquisition of marine terminal assets from Gulf Coast Asphalt Company. The Mobile, Alabama terminal added 1.2 million barrels of storage and distribution capacity for third-party customers in asphalt, crude oil, HFO and methanol. Arc now boasts 5.5 million barrels of capacity around the US, and is pursuing a direct “rail to deep water” project in Mobile to transport Canadian crude via a direct Canadian National Railway rail link to Gulf Coast customers.
Rounding out recent deals in the GOM region, Seacor Holdings Inc. (CKH) acquired the remaining 50 percent stake in C-Lift LLC for $12.7 million in June. Seacor Holdings experienced a strong quarter ended June 30, 2013, with net income of $19.3 million, or $0.91 per diluted share, as compared with $11.2 million and $0.54 last year.

The Pacific Northwest
Looking to the northwest, the maritime landscape has changed slightly with the completion of a couple of deals, one of which had its origins in a successful dredging program. In 2010, the Columbia River channel was deepened to 43 feet in a project funded by the states of Oregon and Washington.  The successful deepening has enabled larger ships to operate in Columbia’s ports, boosting export capacity for regional businesses. On the downside for Foss Maritime, this has also resulted in fewer but larger ships, which reduced business for their unionized tug operation, maneuvering large ships in and out of port and transporting pilots. Tidewater Barge Lines stepped up and announced in April that it would acquire the Foss tugboat business. Foss had previously sold selected tug assets to Tidewater back in 2008.
In a more strategic deal, Lynden entered into a purchase agreement to buy Northland Services from its major shareholder Endeavor Capital. With the acquisition, Lynden added tug and barge capacity to expand its freight service between Alaska, Hawaii and Seattle. Northland also provides transportation, loading, and discharge of construction project-related cargoes; contract barge services; charter cargo hauling services to the Russian Federation and Japan; and cargo stevedoring services to general containerized freight and specialized machinery. Lynden is a family of freight and logistics companies that includes Alaska Marine Lines, which also provides tug and barge transportation services between Seattle and Southeast and Central Alaska.

Looking Forward
Despite the slight falloff in deal activity during the past 12 months in the various marine segments (Figure 1), the environment remains reasonably attractive for both consolidation and investment. A few of the likely driving factors for future deal flow:

Of course, all of this depends upon a reasonably healthy financial picture and at least some promise of economic growth, both of which seem more difficult to predict than market segment drivers. 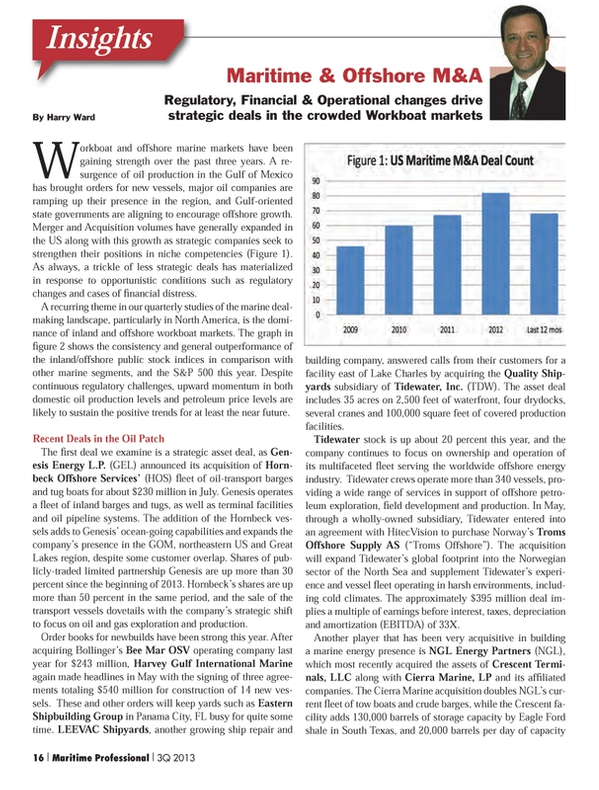