Title 4 of MLC 2006 requires that health protection and medical care for seafarers must include prompt access to necessary medicines, medical equipment and facilities for diagnosis and treatment. Ratified by more than 30 member states reflecting more than 33 percent of world gross tonnage, MLC 2006 came into effect in August 2013. The document applies to more than 1.2 million seafarers. Since 1989, a service for ship operators has provided Shipboard Telemedicine services through the Maritime Medical Access Program at the George Washington University (GWU). Subscribers enjoy access to more than 550 physicians and specialists at the GWU Medical Faculty.

The use of Digi+Doc is an innovative way to meet the MLC 2006 healthcare requirements, but in truth, it does so much more. In the early days, the service involved simple telephone calls between doctors and clients. Today, the kit facilitates real-time transmission of data from ships to a remote clinician. Digi+Doc subscribers can also take advantage  of encrypted video and audio conferencing, video streaming, Voice over IP (VoIP), IM Chat and file transfer, optimized for maritime satellite channels. Easily installed on most PCs, laptops, tablets or smartphones, it can work over a multitude of networks, with satellite airtime costs much lower than other commercial teleconferencing services.

Getting Started – Almost 25 Years of Service
James Betz, Innovative Program Manager for Maritime Medical Access (MMA) with the Department of Emergency Medicine at George Washington University, told MarPro, “We started with a couple of physicians who were interested in seeing how they could extend their emergency medicine skills. We found one or two shipping companies that were interested in utilizing our services, mounted a telephone in our emergency department and started to take calls. Now, we have a dedicated communications center which takes in these maritime calls and connects them to physicians who are on call.”

Betz continued, “Initially, we got things done via telephone and by E-mail, once that became a possibility on board ships. With E-mail, we found that we could send still photos and therefore could deliver a lot better medical advice. But, the limits of ‘still’ photography limited our ability to really practice medicine to the fullest extent. We were looking for a video product that would work well, but all the ones we looked at weren’t secure or they were inefficient with their bandwidth. We found one company that had a kit, but it was proprietary and very expensive and our clients weren’t interested in having something that would just be for medical use.”

Eventually, MMA found DigiGone. And, for the past few years, the two have been working together to develop a kit that can be used for telemedicine. Betz says, “We started deploying it to our existing clients and we’ve had good success in providing better medical services, using video.”

The technology provides real value to users. For example, a recent case involved a sailor on board a ship in the Mediterranean Sea who had suffered a head injury. Betz explained, “The ship and our physician were concerned with symptoms, so we initiated a video conference. Our doctors were able to walk them through a thorough neurological exam using the DigiGone kit. It was like being there in person. The patient was more comfortable.” In the end, the physician was comfortable that they could continue – avoiding a costly diversion and medevac for the vessel.

Diagnosis and treatment are the most obvious benefit, but ship operators are seeing merit in preventative medicine, as well. Doctors can sometimes see someone who is trying to hide a medical condition; “tough it out” so as not to be labeled a non-performer. Betz says, “It is important to get that person medical attention and avert something far more serious for the mariner and the vessel.” The benefits extend beyond initial care and treatment – DigiGone and the GWU physicians follow up on each case.

The initial impetus for U.S. vessels was rooted in Jones Act requirements. Lately, DigiGone and MMA are seeing increased interest because of the new MLC requirements. Betz adds, “Many new subscribers are reporting that they did so because of the MLC Code. They, for the most part, feel that this should certainly satisfy their flag-state requirements.” For U.S. flag operators, future, potential Jones Act maintenance and cure expenses can likely be amortized against the cost of service.

Carrier Agnostic & High-Tech, too
Michael Dunleavy, President & CEO of DigiGone, explains the nexus of the innovative service. “We started out in the special operations and intelligence community. This grew from that to doing remote video surveillance and we were then approached by Maersk to assist with some anti-piracy missions. This involved adapting our low bandwidth capability for cost savings but also dialing into existing CCTV systems. That led to parties asking us to build CCTV systems for maritime environments for their ships. One of the unique things that we have is the ability to compress entire transmissions of video/audio with encryption. It works extremely well with fleet broadband.”

DigiGone’s unique system leverages their extremely robust encryption (important for HIPAA privacy reasons) and crunches the video/audio package into a very small stream to go across any communication medium.

The system is completely provider agnostic. DigiGone does not have an exclusive agreement with any satcom supplier, but has reseller relationships with several of them. For example, DigiGone is an INMARSAT certified business partner, and does business with Thuraya.
Dunleavy adds, “The unique thing about our service is that it is user controlled – the user controls how much bandwidth they want to use. At the point that we need a really detailed picture for a tight image of a procedure, the user can dial that up – to 150 or more kbps, which will give them a crisp picture of whatever the doctor wants to see.”

Low Cost – in more ways than one
DigiGone’s medical access program with MMA has always been a subscription based system with unlimited use and they intend to stay that way. Betz says, “In fact, when we sign on a new client, we give them information to post around the ship to encourage them to call us. We want to be a resource for these mariners because if they can call us early and know there won’t be any extra fee associated with it. Our interest is to help the company control costs.”

Dunleavy takes it a step further. “The user can dial bandwidth consumption up or down – depending on whether you need the video and audio or just audio – which is pennies compared to a standard satellite call. An ounce of prevention is worth a pound of cure. If it was something that could have been addressed and prevented ahead of time, you are preventing a diversion. It’s the same thing with diagnostics. When you are using video, it enhances the level of care.”

DigiGone wouldn’t discuss fleet numbers or client lists, but Betz says that they fielded well over 2,000 calls, including E-mails, video consults, as well in the past calendar year. Fully 90 percent of DigiGone’s business involves maritime traffic as opposed to remote, shore-based needs. It’s also the area that seems to derive the most benefit from the service, because of the cost of ship diversions, evacuations and that sort of thing. Getting a crewmember off really impacts the shipowner’s bottom line.

Crewmembers can take the kit down to the engine room to photograph or video the engine and thereby enable consultations with shoreside technicians. Quick to send and easy to install, operations personnel often use the audio portion at a fraction of the cost of a normal satellite call. The anti-piracy portion of the system employs handheld cameras to assist with that, should it come to it. And, as an engine technician dials in, the operator’s shoreside personnel can all dial in at the same time to diagnose an engine problem – at no additional cost for the bandwidth. In fact, says Dunleavy, four or five different persons can be looking at the same video feed.

Chris Fertig, General Manager of Maritime Technical Services at Maersk Line, Limited says Maersk has found many uses for DigiGone. “We began the process of installing these kits and using DigiGone Secure Chat to communicate with the physicians at GWU-MMA about two years ago, as a part of a larger project to outfit our vessels with CCTV systems for Piracy Interdiction and other applications. Prior to testing DigiGone Secure Chat on our vessels, we could find no video product which would allow us to remotely access cameras on each vessel using the limited Inmarsat Fleet Broadband satellite bandwidth available, and at an acceptable quality and cost. DigiGone not only let us access the cameras, but left enough bandwidth to simultaneously run our other mission critical applications. DigiGone literally allows us to do more with less.”

Maersk’s initial push for the relationship with MMA was an effort to properly care for crewmembers and to exceed the Jones Act requirements for its US Flagged Vessels. Interestingly, crews were initially reluctant to have cameras on board the vessels. An effort to explain the purpose of the services and devices being placed on board and to educate the crew on the benefits of the technology eventually won them over. Fertig adds, “Now, crews lobby their vessel managers to be the next ship to be outfitted with the cameras and kits.”

Indeed, the cost savings from one just incident can be enough to cost justify the implementation of the software and hardware on all the vessels. MLL now uses the software and cameras for Telemedicine for Crew injuries and illness, Remote Technical Support, Crew Video Communications with loved ones, Vessel Manager to Master/Chief communications and many others. Fertig explains further, “The fact that we can control the amount of bandwidth used for each session gives us the ability to make value versus cost decisions for each application on an ongoing basis.”

All that’s needed for shipowners to take advantage of Digi+Doc is to install the DigiGone software on a shipboard computer, and sign up for an annual subscription to the Maritime Medical Access Service at GWU. 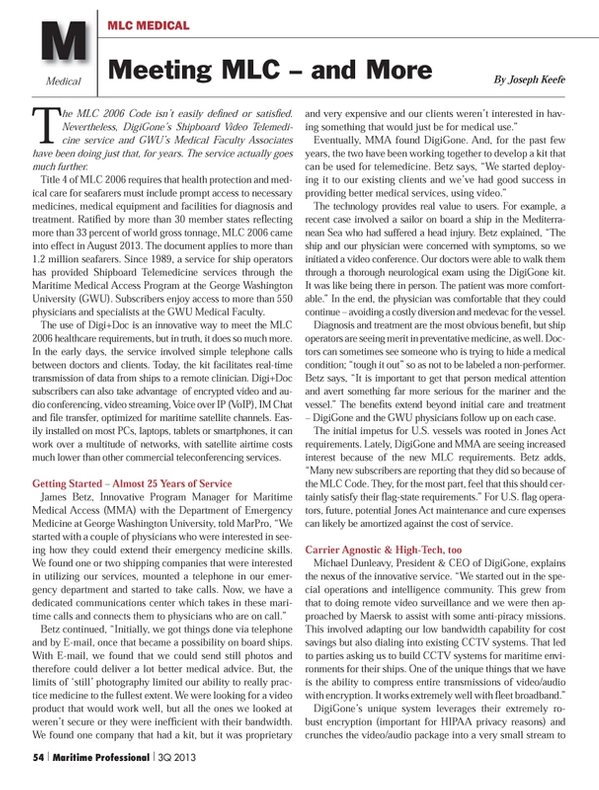