Market volatility for the petroleum sector provides a backdrop to an evolving Merger & Acquisitions environment for the Offshore Sector.

In the 3Q edition of Maritime Professional, this series of articles examined the overall evolution of maritime and offshore M&A activity since 2010, tracing the flow of deals in the post-financial crisis era. In this edition, we take a closer look at relevant U.S. offshore energy industry deal flow and market movements as they relate to oil prices over time, and highlight some recent middle market transactions.

Volatility in the petroleum markets is a constant refrain and seems to surprise even the best analysts more often than not. Figure 1 displays a comparison of marine and offshore M&A deal flow with average world crude oil prices over the past ten years. Financial markets as defined by deal flow tended to slightly lead, or anticipate the upward surge in oil prices between 2004 and 2007. Looking to the wider markets, annual global deal counts more than tripled in the narrowly-defined segment through this period, capped by megadeals such as Transocean’s (NYSE:RIG) $6 billion acquisition of GlobalSantaFe Corporation from Siem Industries and the $2.5 billion acquisition of TODCO by Hercules Offshore (NasdaqGS: HERO).

After reaching a peak in both volume and total value during 2007, the M&A market quickly reversed as the financial crisis approached and oil prices plummeted through 2008.  Despite a few periods of volatility in the six years of uneven recovery, deal counts in the segment have largely rebounded and remained somewhat predictable. It is worth noting that North American oil and gas terrestrial M&A markets were much more active and volatile through this period, as the fracking and shale booms rapidly evolved.

Recent Market Moves
Fast forward to the second half of 2014, and volatility has begun to grow in both the crude oil and financial markets. Figure 2 shows a public company offshore index that includes a number of offshore service vessel operators and petroleum transport companies. A similar pattern emerges in relation to oil prices throughout the ten year period. A steady increase in share prices since the 2008 crash has been punctuated by a few periods of volatility, especially in 2012 and in recent months. Shares of Kirby Corporation (NYSE: KEX) experienced a 15% setback between August and October 2014, while offshore companies Tidewater Inc (NYSE: TDW) and Hornbeck Offshore (NYSE: HOS) declined as much as 30% through this unpredictable period. At the heart of the market retreat has been an oil price decline of around 25% from about $107 per barrel to as low as $80, due to a glut of both crude and refined petroleum products worldwide.

Mergers and Acquisitions activity has cooled slightly in recent months in offshore marine and energy sectors along with the overall market declines. The high-growth periods immediately before and after 2008 were marked by a large volume of deals involving large companies and drilling properties.  However, more recent transaction flow has centered on smaller equipment and services company deals, as market players carve out profitable niches that are perhaps less exposed to major market swings.

Though some large transactions and companies were highlighted earlier, the bulk of mergers and acquisition activity tends to take place in the “middle market” or “lower middle market.” These market labels do not have a precise definition, but in our industry segments the lower middle market tends to include very small deals and the middle market extends to those with a total transaction value of a few hundred million dollars. Boutique investment banks (such as this writer’s) tend to focus on these smaller deals, and there is no shortage of interesting and varied U.S.-related deals to review.

Service Company Deals
Throughout the current year, a number of compelling middle market deals took place with companies that provide niche services in the offshore industry. Kicking off the year, in February, Denver-based private equity group Lariat Partners acquired the environmental services business of Newpark Resources, Inc. for $100 million in cash. Lariat merged Newpark Environmental Services with Offshore Cleaning Systems to form Ecoserve, which they tout as the “first truly comprehensive solution to the management of oil and gas waste.”  In the same month, DigitalGlobe (NYSE: DGI) acquired Spatial Energy for $35.7 million. Both companies are based in Colorado and serve the oil and gas markets with geospatial data and analytics. DigitalGlobe is a full-service provider in the geospatial realm and Spatial’s cloud-based solutions enable the company to provide vital insights to their customers in the O&G vertical.

Virginia-based Huntington Ingalls Industries (NYSE: HII) completed a couple of transactions in 2014 including the acquisition of Houston-based UniversalPegasus in May. UniversalPegasus provides a range of project management, engineering, design, survey, inspection and construction management to the energy and offshore markets – terms of the deal were not disclosed. Earlier in the year, HII had acquired Colorado-based environmental consulting company SM Stoller for $53.7 million and the company is actively seeking additional acquisitions. These presumably will all complement their existing core businesses.

After a string of American acquisitions of UK offshore companies in recent years, Aberdeen-based WS Atkins plc swam against the tide and added to its portfolio of acquired companies when it bought Houston Offshore Engineering for $73 million in October 2014. HOE specializes in the design of offshore deepwater floating production platforms.  The HOE acquisition followed Atkins’ purchase 130-person, US-based Nuclear Safety Associates, Inc. in late 2013.

Equipment and Products M&A
Deal flow in offshore equipment and products segments so far in 2014 has been focused on relatively small, high-technology product companies. An exception was private equity group KKR’s acquisition of Aberdeen, UK-based OEG Offshore for $171 million in July. OEG manufactures and leases a range of specialized cargo carrying units used to transport equipment and supplies to and from rigs. Up the technology spectrum a bit was UK private equity house Dunedin LLP’s $117 million investment in EV Offshore, a provider of downhole cameras and camera services to the offshore O&G industry. Both the OEG and EV deals can be thought of as Management Buyouts (MBO), where a private equity sponsor teams with the executive management team to acquire and grow the company. In a typical MBO, the private equity firm will assume a controlling interest and management will retain significant ownership, with the opportunity to earn more equity over time.

Beyond this sample of 2014 offshore service and equipment deals, there were many smaller transactions as well as large, recognizable mergers and acquisitions. Our examples and review provide a sense for the flavor of middle market deal activity in the marine, and particularly offshore industry sectors.

M&A transactions enable companies to grow and change in a number of ways. Mid-sized companies are able to expand through the addition of synergistic technologies and services; Investment companies can team with experienced managers to gain control of and grow and company that they know well; and entities that are struggling financially or have run out of ideas can find new life under the direction of an ambitious acquiring company.

The Author: Harry Ward leads the transportation and logistics practice at The McLean Group, a middle-market investment bank based in the Washington, DC area. Mr. Ward has executive management experience in the marine industry and focuses on mergers and acquisitions for mid-sized companies. He is a US Naval Academy graduate and earned an MBA at San Diego State University. 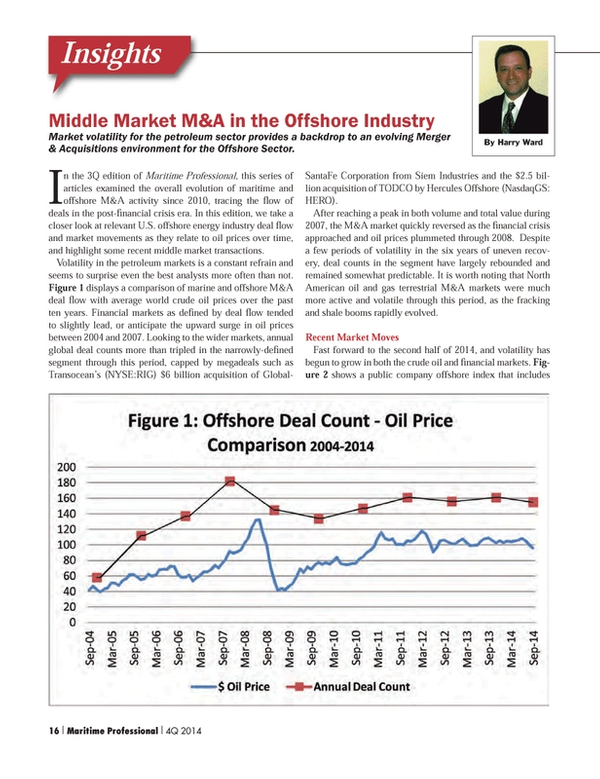