The Other Side of the Flange

Looking beyond the dollars and cents in the demise of bunker giant OW Bunker, MarPro contributor Barry Parker examines the unusual human resources aspect of the story.

The old cliché in shipping and commodity businesses says that, “When the tide recedes, you can see which vessels have hulls that are battered up, or worse, actually breached.” OW Bunkering, which took on water and foundered in November 2014 – a mere seven months after a highly successful IPO in Copenhagen that valued the company at nearly $1 billion – offers a case study in bad risk management, along with a mélange of poor governance, ineffective controls and a dose of outright fraud. It also brought the management of human resources to the forefront.
When it comes to the OW Bunker story, one can’t help but look back to the similarly quick and catastrophic demise of energy giant Enron that occurred back in 2001; not because of the financial ruin that took place, but instead, because of the impact that the event wrought upon thousands of hard working employees who suddenly found themselves out on the street in its choppy and roiled wake.
OW Bunkering had started small, around 1981, actually as an adjunct to O. Wrist Ship Supply, a ship chandlery business founded in Aalborg, Denmark in the 1950’s. The fuel company grew into a large regional player which was active primarily around the Continent and Mediterranean markets. After its sale in 2007 to the Swedish private equity (PE) fund Altor (which retained 35% after the IPO), the OW footprint grew wider. The worldwide bunker supplier would grow to more than 600 employees; spread over dozens of offices all over the globe.
Among multiple business failures, two stand out. First, an inordinate amount of credit by a Singapore subsidiary- Dynamic Oil Trading, was extended to a defaulting Singapore customer, Tankoil Marine. Credit limits that had been established were ignored. Secondly, activities in the commodity derivatives markets that were meant to manage risk instead turned into speculative bets that lost money as oil and fuel prices plummeted during Q3 and Q4 of 2014.
Supply businesses that are inherently “long” oil (i.e. holding actual inventories, or commitments to purchase fuel) need to protect against downside price movements. The risk managers, instead, placed various wagers that prices would rise (responding to whispers, perhaps, of possible shortages of low sulfur marine fuels at end of 2014 as new regulations kicked in).

The Human Cost
OW’s business issues have been thoroughly dissected in both mainstream financial and shipping trade press outlets. The financial fallout was severe, and its impact reached into many sectors of shipping and trading. On the other hand, less has been written about the softer issues, dealing with people and personnel. There was no warning when the OW ship went down. Internal notices circulated among staff and partners, dated Monday (November 3), were announcing an after-work wine and cheese party for a soon-to-retire colleague. By Friday, November 21st, just two weeks after banks ceased extending credit to OW, a different story was being told. Top management pointed to pending bankruptcy and liquidation.
The actual bankruptcy filing occurred on November 7th in Denmark, and on November 13th in the United States. Like the company, individual employees were also ‘caught out’ – literally. Danish employees posted to far flung places were stranded at overseas airports with their families, unable to get back home. According to sources, their return tickets had been canceled by the Danish bankruptcy administrator, losing the full value of the tickets, just to recover the airline taxes for the benefit of the bankruptcy estate. These people, apparently, could only travel home at their own expense.
Conversations with insiders suggest that, historically, OW Bunkers was a caring company, viewing employees as being akin to close relatives. Retention policies, though of an informal nature, were built around the close-knit family feeling. But it was back in 2007, with the acquisition by Altor (a step on a well-trodden trail that leads to a public listing after building up a business), that OW’s management pendulum began to shift towards that of a business run by numbers men (and women) who may not have spent their careers in the maritime business. Altor’s holdings span a broad spectrum; the apparel maker Helly Hansen is perhaps its best known portfolio company. After a seven-year holding period (not unusual in the PE world), and the IPO in March, 2014, the culture was increasingly all about numbers and margins.

Softer Landings, Focused Strategies
In the months following the bankruptcy, the shipping and energy business trade press have also published another side to the story – a steady stream of happier stories – describing movements of OW teams, en bloc, over to other marine fuel suppliers or energy traders seeking to establish outlets for their inventories of heavy fuels and middle distillates. For example, Mercuria, a large trader based in Geneva, had initially absorbed more than 40 former employees from OW offices in South Korea and Singapore (though subsequent reports have the South Korean group de-camping over to World Fuel Services). In a December 2014 announcement, Minerva, the fuel trading arm within Mercuria, had talked about opening multiple additional offices, including in Geneva and Houston.
Separately, Aegean Marine Petroleum, the buyer of multiple bunker tank vessels, and inventories of fuel in storage from OW, hired a fuel supply team based in St. Petersburg, Russia. Vitol, another large trader, took on an OW team serving the markets in China. Elsewhere, Glander International is mentioned as having snared an OW group in its home-base of Dubai. Closer to home, Dan Bunkering brought an OW team into an office in Aalborg, Denmark, in addition to taking over a Denmark-based physical supply operation for ports in the Baltic region. Other well known market participants who absorbed staff from OW include KPI Bridge Oil and Peninsula Petroleum.
Though the list is a long one, one fact stands out. Personnel movements following the bankruptcy, in nearly all cases, involved entire teams, which former OW insiders attribute to the long-standing company culture that remained hidden underneath the P/E and IPO veneer, but never really vanished. This old style culture bubbled up, and reasserted itself after November 13th. Rather than an ‘every man for himself’ mentality, the fundamental tenet of being stronger as a group (which typically would include senior deal-makers, traffic/logistics specialists and clerical/billing personnel) prevailed. Conversations with insiders suggest that senior traders told personnel recruiters, “You take all of us, or none of us.”

What not to Do
The management literature, found in scholarly articles and websites of well-knowns such as Bain & Company, McKinsey and other high powered consultants, obsesses on corporate culture. A subset of this obsession concerns what happens after P/E investors buy businesses, often from the standpoint of infusing a win-at-all-costs culture into target companies. A Bain & Company article that focuses on managing businesses that are owned by investment funds, said, “… the leading Private Equity companies systematically create a ‘performance culture’ in the businesses they own. Management and employees come to work each day determined to do everything they can to increase the equity value of the business. Nothing is allowed to get in the way of making the business more successful and more valuable.”
Such attitudes may have precipitated the problems at OW, and, in particular, at Dynamic Oil Trading, its catastrophic loss-making Singapore subsidiary not mentioned in OW’s March, 2014 prospectus. Altor, on its website, describes a key criterion for its investments: “As a rule of thumb, we only invest in companies where we see a potential for the company to double the operating profit in a five-year perspective.” Ambitious targets, in a thin margin business such as marine fuels, at a time of a huge external shock (falling oil prices) can only be described as putting OW into the path of a perfect storm.
The analogy of OW Bunkering as a shipwreck – really a constructive total loss (CTL), resulting from that storm, applies here. Yet, the old culture (rather than the PE framework) prevailed; survivors were plucked from the waters by their work colleagues (not by top management or by financial engineers, who were in full damage control mode), enabling the survivors to swim collectively, rather than sinking.
Like most casualties that impact one sector or another, the aftermath of the OW Bunkering saga might give pause to outside investors who seek to enter sectors of the  maritime businesses where price exposure looms large.  It also should provide a cautionary tale for loyal employees who unexpectedly find themselves in companies now controlled by financial investors, and then unexpectedly looking for work. Career-minded maritime industry professionals everywhere – and not just in bunkers – should therefore be closely watching closely the machinations that occur in the c-suites.

The Author
Barry Parker, bdp1 Consulting Ltd. provides strategic and tactical support, including analytics and communications, to businesses across the maritime spectrum. The company can be found online at: www.conconnect.com 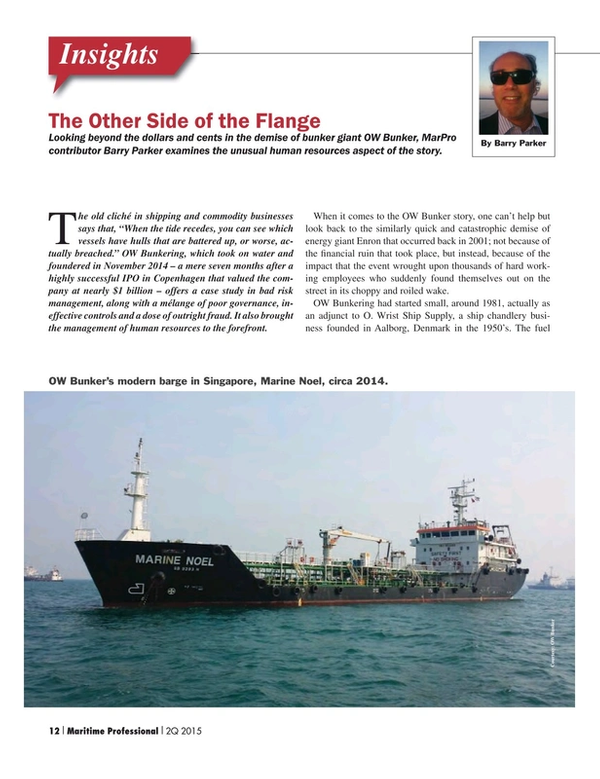 Read The Other Side of the Flange in Pdf, Flash or Html5 edition of Q2 2015 Maritime Logistics Professional