Ulstein: Stronger Than a City

According to local business records for Ulsteinvik — a swampy but beautiful corner of coastal Norway — Ulstein Group chief exec Gunvor Ulstein is tied to her chairman and deputy-CEO brother, Tore Ulstein, by 16 business entities. Strong ties on paper, to be sure, but this is no ordinary family enterprise. That’s because Ulstein has grown into a conglomerate comprising power and propulsion outfitting, worldwide shipbuilding, revolutionary ship design, property holdings and financial interests.
The 46-year-old Gunvor and 48-year-old Tore have largely captained the $42 million-per-year Ulstein Group ASA to exponential growth since about 1999, when the Group’s yard began its modern era of design-and-build. Today, 53-year-old Kristian Saetre manages the shipyard with Gunvor chairing its executive. Yet, when she whirls her BMW all-wheeler efficiently into its parking space at the entrance to Group HQ in Ulsteinvik, it’s clear to soggy journalists that Gunvor — granddaughter to the 1917 founder of Ulstein’s original shipyard — is the heart of Group financial interests.

Fast Driving Business
“I drive fast,” a blonde, slim and serious Gunvor asserts. She drives the business in similar fashion, helping grow it with great urgency, poise and brotherly love into a major concern. While family before her grew the company to nearly 3,000-strong, a 1997 acquisition by Vickers claimed 75 percent of staff, and numbers have only in the past decade been brought back up to about 800. A new breed of designers, engineers and management talent now presides. Affiliates in Poland and China provide services. Financial oversight is PwC.
Dressed in a smart gray business suit and not the brown leather she drove in wearing, Gunvor confirms there have been personnel changes of late. “We have brought in many better-qualified people the last few years, and it has made all the difference in what we’re able to do,” she says, a nod to the challenges of modernization and survival amid powerful Asian and strapping Norwegian competition. The careful manning has come with investments in sophisticated inspection, maintenance and repair vessels.
Recent hires suggest her brother Tore’s “side” of the business — engineering — balances her business skills with a builder’s foresight. In this predominantly shipbuilding and service outfit where a handful of management personnel oversee scores of local and sometimes foreign workers, it can be heartening that the pick of design, leadership and technical talent is still to be found locally. New “managers of innovation” brought in late this winter came from across the quay at Rolls-Royce Marine and via promotion within the Group. Rolls-Royce Marine is a competing builder of ship’s gear, and yet new hire Bernt-Aage Ulstein in March 2015 became Ulstein’s new design manager. His MSc and MBA were employed as technical director in the Rolls-Royce propulsion department. An Ulstein communiqué describing the new manager as “a motivator and team builder” reveals prior detailed knowledge of another company’s man in this tight knit coastal community.

Business Sense
Known for the Group’s innovation, Tore and Gunvor shocked some industry observers in 2011, when they showed financial élan and launched the investment vehicle Blue Shipping to operate ships until they find gainful employment or dedicated owners. Blue’s been a smash hit in a local shipping industry known for cyclical business gains.
Blue Shipping AS appears to run a tiny deficit in order to promote an efficient new, reproducible ship design sought after by fleet owners. Launching it meant taking on risk to series-produce the streamlined PX121 platform supply vessels, but fortune favors the bold in shipbuilding, and offshore-interested buyers from southern Norway were quickly found.
Ulstein Power & Control AS, another entity in the Ulstein Group, has also run a managed deficit but provides ships gear, installation services and work for skilled area residents. The local focus is a key strength of the Group. Another entity — Ulsmo AS — is the Group’s largest shareholder and oversees local-only property investment and a fund, in an apparent effort to give back to a region considered “very special” by industry observers.

Design Lessons
“If I’m late for a meeting with her, she goes crazy,” says a trim and slightly professor-like Tore of working with his sister. Though firm on his feet, they begin to shift back-and-forth as he hurries to make several points about recent Ulstein moves before a tête-à-tête with Gunvor. From the pit of a collegial home-office cinema room, Tore talks animatedly of design as a business driver.
Earlier than many, he and Ulstein designers like X-bow hydrodynamics expert and U.S.-trained naval architect Oyvind Kamsvaag seem to have understood that building ships is also about people. In August 2014, Ulstein unveiled the X-Stern design for better station-keeping and working conditions in big waves. The design followed talks with veteran captains. “Taking a walk with ship owners” Tore says, is just one way to think the business of shipbuilding. Another is the “design conduit,” where raw creativity can create a market. “We have to balance that creativity with a need to be efficient,” he says, before rhetorically adding, “What is the design stage? (It can be) more difficult to decide because you’re deciding while developing your market.”
People are the reason Ulstein pursued the Bridge Vision concept, a series of digital and physical innovations designed aimed at making ship leadership more efficient and engaging. During its development, bridge crew behavior was studied and mapped for two months before Ulstein’s multi-disciplinary teams synthesized the research. Alarm-handling elements of Bridge Vision appear in the SX 165 platform supply vessel, Blue Thunder, as a yellow circle on a dash.
“The gaming generation has arrived on the bridge,” an Ulstein manager reminds us. Indeed, graphics-savvy Americans will one day be serving aboard Ulstein X-Bows. The first SX 165 PSV slides out of a Louisiana slip at year-end 2015.
Though an economist and not a naval architect like her brother, Gunvor sees the business in designing for crews and customers. “You have to have bold missions and goals and work hard and fast if you believe what it is you’re saying (about the new designs),” she says. But she adds, “We can’t grow the top-end products if we don’t deliver the bottom line.”
Ulstein has also managed to convince the local supply chain, and of 200 sub-suppliers offering products and services on a recent project, half have come from the west coast of Norway. When Gunvor spoke to us, the order book of X-bows was still sizeable, and designs were being built in China and Poland with plans afoot for the United States. The better part of 68 ordered X-bows have now been sold.
“International growth will always be a part of us,” she says, adding, “You have to live in the future.”
Before a recent slowdown in the oil and gas business, charterer Statoil, a large Norwegian deep-water oil company, had been a great driver of technological change offshore Norway. Its well-intervention leaders and project managers have been appreciative Ulstein designs. “We like demanding customers,” says Gunvor. Subsea 7 and Eidesvik Offshore, co-owners of the Ulstein-designed Seven Viking IMR vessel launched in 2013, are now on a five-year contract with Statoil.

Tight Ranks
Winter 2015 also saw the employment of a new innovation and development manager for Ulstein Design & Solutions AS, another business of the Group. Frode Sollid ascended to the role when he moved on to enable the Rolls-Royce hire. Sollid will also manage Ulstein Strategic Innovation Center, a nod to the scale Ulstein has assumed.
Meanwhile, Tore’s roles continue to widen. He chairs the national Confederation of Norwegian Enterprise, which is business’s salary negotiating body in talks with Norway’s unions. Election to the post is a sign of Tore’s grasp of industrial Norway, the scale of the family enterprise and the Group’s central role as nation-builder in this Nordic country of five million souls. “We’re more than just an ordinary shipyard. We’re investing in vessels,” Tore says. Indeed, he, his sister and others preside over 30 shipbuilding projects worldwide.
“I think the center of gravity is (still) in this region,” Tore says of this patch of western Norway.
Gunvor, again, offers another take on her business vision for the Ulstein Group. Asked if she thought the competition in Norway and Asia were getting too hot, she offers this: “The world is full of shipyards. We want to do the service side, too. We can prototype. We can build whatever we like.”
We’re caught off guard, as the economist points out a bit of design history. She reminds us that 15 years ago, Ulstein was building large anchor-handlers, but had moved on. “When we see the market move, we move as well,” she says.
Ulstein, meanwhile, has become a magnet for hopeful jobseekers and the Group actively stimulates early interest in offshore-related disciplines rather than overtly recruiting. High-school students are offered motivational courses; trade apprentices are offered placement, and doctoral writers are all encouraged to engage and hopefully one day join the company.
“We cooperate with a number of higher education institutions in Norway, and students at these institutions are given priority,” an online Ulstein recruitment page states. Alongside the AD, the words “good written and spoken English” offer hope to the rest of us. 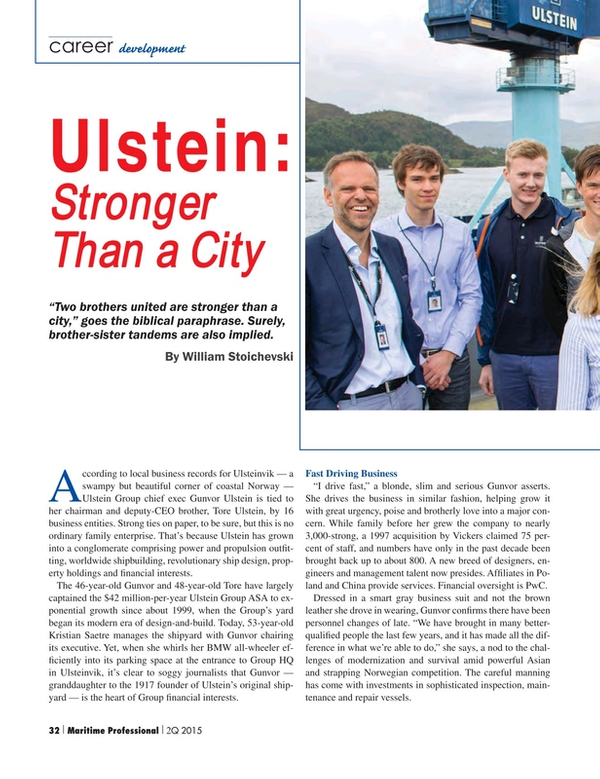