Gaining the Competitive Edge in a Booming Cruise Industry

2018 is set to be a recordbreaking year for new cruise ships, with just about every major cruise line due to launch a new ship during the course of the next 12 months. The four leading cruise companies – Carnival, Royal Caribbean, Norwegian Cruise Line and MSC Cruises – are all poised to unveil their own state-of-the-art vessels, each attempting to offer the most innovative features at sea. The cruise ship building boom will force ship owners to think of new ways to outsmart their competitors, with many turning to emerging technologies in an attempt to build a strong and unique selling proposition (USP) that is both genuine and permanent.

Continuing pressure will also come from luxury onshore destinations – a long-time rival of the cruise industry. Previously, poor connectivity has created a clear distinction between vessels and luxury resorts. For years the cruise industry has been plagued by old technology, leading customers to view high-speed internet as something limited to land-based destinations only. However, in today’s digitized world, travelers have grown accustomed to always-on, ubiquitous connectivity, and expect it on board.
According to a report by CLIA, the world’s largest cruise industry trade association, 27.2 million people are expected to go on cruises in 2018, most of whom will expect to stay online throughout their trip – even when in the remotest of locales. Gone are the days where people went on cruises to ‘get away from it all’. The rise of social media from all age groups, widespread transition of entertainment services to streaming sites and the desire to be online and available at all times are just some of the reasons why connectivity has been pushed up the list of holiday must-haves.
Enhancing the Customer Experience
More and more cruise lines are now investing in satellite connectivity to get ahead of the game. At the end of last year, Dream Cruises announced that it would be providing its guests with ultra-fast, onboard broadband services, powered by SES Networks. SES Networks’ high-performance and reliable high-speed connectivity enables passengers to stream movies, game online and share real-time vacation travel videos and photos across social media platforms – often at the same speed as they would onshore. By tapping into SES Networks’ innovative satellite technology, Dream Cruises has transformed the customer experience onboard, shrinking the connectivity gap between land- and sea-based destinations.
Dream Cruises is just one of several large cruise companies that have turned to SES Networks to give it a competitive edge. In September 2017, Carnival Corporation & plc, the world’s largest leisure travel company, announced MedallionNet, a game-changing connectivity service powered by SES Networks. MedallionNet will provide guests with easy-to-use-access Wi-Fi that features exceptional speeds and bandwidth, pervasive stateroom signal strength, and unprecedented service consistency. This was no minor decision. Indeed, to generate the fastest internet ever seen at sea requires constant communication between Carnival’s fleet and SES Networks’ Medium Earth Orbit (MEO) satellites before vessels can receive a strong and reliable signal, no matter where they are voyaging.
Royal Caribbean, a long-term customer of SES Networks is also delivering its Voom service over SES Networks’ MEO satellites, and is launching new ships in 2018.
Game-Changing Connectivity
SES Networks is setting a new standard of enhanced guest connectivity experience, unmatched in terms of speed, performance and reliability. Its MEO satellites enable the large cruise ship market to receive internet access at 1 Gbps per vessel, the current highest connectivity rate in the maritime market. The benefits of this are self-evident. With so many brand-new cruise ships launching this year, blazing-fast connectivity will allow them to stand out from the rest of the competition, providing cruise ship owners with the means to modernize the customer experience with new satellite-enabled technologies.
But the benefits don’t just stop there. SES Networks’ fleet of satellites also has the ability to provide industry-leading facilities for captains and crew. As the industry continues to rapidly expand, more captains and crew will be needed to man the growing number of cruise ships. In 2016, the cruise ship industry employed over one million staff, many of whom will be away from home for weeks at a time. In the past, without internet access ship crew were cut off from their life on land, and forced to endure long periods of time without any contact from their loved ones. Satellite-enabled connectivity is changing all of that. SES Networks understands that cruise customers and crew want to keep in touch with their family, friends and social networks – even while island hopping in the Caribbean, for example – and delivers the smart ship necessary to make that a reality.
Furthermore, as the cruise industry becomes more digitized, ship crews are becoming increasingly reliant on digital technology to fulfill their roles. Connectivity that delivers access to cloud-based platforms makes training via e-learning, computer-based training, videos and even virtual reality a realistic possibility for the crew, supporting increased safety and efficiency as well as crew retention and job satisfaction. Being the only one in the industry to offer a multi-orbit (GEO and MEO) in multiple bands (Ka-, Ku- and C-band), SES can offer the flexibility the cruise ship owners need to maximize their crews’ potential.
The ‘New Normal’
2018 promises to be a year of innovation in the cruise ship industry, with technology set to augment the cruise experience in an entirely new way. At the very forefront of this will be ultra-speed, highly reliable satellite-enabled connectivity. Investing in cutting-edge broadband services will enable the cruise ship industry to free itself from its old shackles, and propel itself into a world of digitalization where land-based speed connectivity is the norm, not the exception.
The Author
Gregory Martin is Vice President, Maritime Segment for SES Networks. Gregory has over 20 years of experience in Information Technology, with a focus on the unique connectivity needs for the maritime and aero industries. Before joining SES Networks, Gregory was Director of IT Operations for Royal Caribbean International where he was instrumental in revolutionizing the cruise industry, leveraging satellite connectivity for guest experience maximization.
(As published in the January/February 2018 edition of Maritime Logistics Professional) 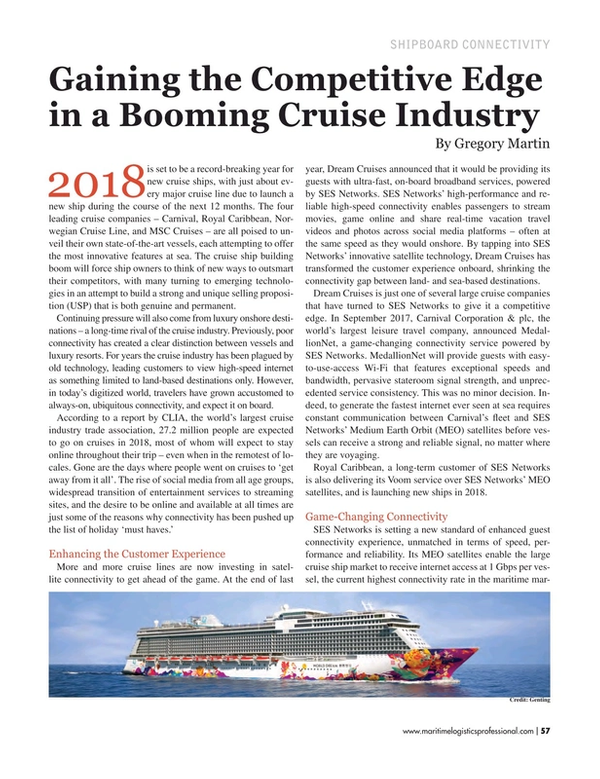 Other stories from Jan/Feb 2018 issue