When it fully stood up, CPA’s first full time employee was none other than Evan Matthews, CPA’s Executive Director. He got right to work. Matthews explained, “We’re working on our third operating budget. And we’ve gone from about $400 thousand in state appropriations, and today, we have close to a $1.6 million dollar budget and five employees.”

There’s no previous model for what Matthews and his colleagues are trying to stand up. “We have an interesting mandate – we are to promote the maritime sector focusing on the shipping activities in three deep water port complexes in Bridgeport, New Haven, and New London. They’re all slightly different,” he said.

SHIPP: Funding the Mission
Coordinating the development of Connecticut's ports and harbors, while working with other state, local and private entities to maximize the economic potential of maritime commerce, CPA created SHIPP as a central part of its strategy to support development throughout Connecticut’s waterfront communities.

Through a separate mandate from the legislature to invest in small harbors throughout the state, last year CPA did its first round of Small Harbor Improvement Projects (SHIPP). A SHIPP Grant may be used on a wide range of improvements including: marina repair, dredging, boat ramp facilities improvement, breakwaters, harbor management plans and feasibility studies. The goal is simple: to strengthen the long term growth of Connecticut's maritime economy. Locally, the Connecticut Legislature likes the SHIPP projects because they’re a good way for them to connect with their constituents through these projects.

“We had 18 different projects and invested about $4 million and that funding was provided by the State of Connecticut,” Matthews explains further, adding, “We partnered with municipalities on small projects like boat ramps, visitors docks, small dredging projects, and we’ve funded some harbor management plans. It’s a wide range of activities that we support. And we also license and administer the Connecticut State Pilots.”

Fair Winds Propel New London’s Infrastructure
In May, the Connecticut Port Authority, Gateway Terminal, Eversource and Ørsted announced a partnership to revitalize State Pier and establish New London as a major northeast center for the growing offshore wind industry. The estimated $93 million investment promises to transform State Pier into a state-of-the-art facility, while creating a platform for heavy lift cargo, such as offshore wind components. The wind component is especially important.

The two-phased redevelopment plan involves a three-year planned upgrade of the facility’s infrastructure to meet the heavy lift requirements of Bay State Wind’s offshore wind components. The plan is for Bay State Wind to enter into a 10-year lease agreement granting the joint venture between Eversource and Ørsted exclusive use of State Pier for assembly and deployment of offshore wind components. Gateway Terminals, originally of New Haven, CT, signed a long-term concession agreement in January and will act as the new terminal operator.

Evan Matthews is confident that the deal with come together successfully. In this case, he’s got logistics on his side. “New London is one of the only ports on the eastern coast that doesn’t have any overhead bridge restrictions. This will allow the inshore building of wind turbines in shore, promptly loading onto an installation vessel, and then bringing it out to the foundation. Both ports in Narragansett Bay and the New York ports have airdraft restrictions.”

Notably, the newest public-private partnership in the Constitution State includes investment bankers Seabury Maritime. At its heart, the latest investment is designed to position Connecticut as a leader in the offshore wind industry and expand economic opportunity throughout the region. The Connecticut Port Authority will oversee the project, with construction beginning in January 2020 and anticipated for completion in March 2022.

Dredging: Digging Deep for the Future
For Connecticut’s ports – more so than most others along America’s 95,000 miles for coastline – dredging operations will be the key to future success. Today, the controlling depths in the state’s three big ports just aren’t deep enough. New London stands at 36 feet; New Haven about 38 feet, and Bridgeport – authorized to 35 feet – currently stands at just 28 feet.

Currently, the only plan in place involves the deepening of the port of New Haven. A U.S. Army Corps of Engineer (USACE) study is now complete, and the hope is to deepen the New Haven channel to 40 feet.

“It should go into design as soon as we authorize the funding to do that. The State’s portion is probably about 26 million – it’s about a 74 million dollar project in total. We would hope to get that (into a bill) as soon as we get the chief’s report and everything is authorized to go,” said Matthews.
Although CPA works closely with USACE Engineers to manage federal navigation projects, their relationship with local ports is unlike most other typically US ports. Matthews explains, “Although we’re not in charge of any of the deepwater ports, each of the deep water port cities has its own port authority. So we work in various ways with those smaller port authorities to support their activities through sharing costs of marketing and membership dues and that sort of thing.”

Matthews is pragmatic about what CPA can accomplish, and what it cannot. In terms of Bridgeport, he said, “We’re not trying to take them over; we’re trying to leverage and support their mission with the funding sources that we have. The biggest benefit that we have as a state agency is that we have the ability to request capital dollars in the governor’s budget. We also have the ability to go before the State Bond Commission and request bond funding that’s been authorized by the legislature.”

In Bridgeport, CPA is trying to help them dredge to 35 feet; the authorized depth. “We’re working on that to get more ship traffic in. Most of Bridgeport’s traffic today involves domestic barge petroleum products or aggregate. That’s all US flag tug and barge stuff so they don’t really need a deep channel. There’s also a ferry operation there, as well,” adds Matthews.

Building volume in the state’s commercial ports involves a three-port strategy. Like Seattle and Tacoma in the Pacific Northwest, Connecticut has realized that three niche ports can’t survive if they are competing against one another. “I think one of the things in the past is Connecticut struggled about getting a coherent message out there that it is one network – it’s one gateway that’s got three different ports. If we had Bridgeport competing with New Haven they’d never get that holistic, unified vision.”

Domestic: The deepwater ports of Bridgeport, New Haven, and New London handle shipments of commodities domestically, or the movement of goods within the United States, and this trade is much larger by volume than the foreign traffic through the ports. Together with Stamford Harbor, the deepwater ports handled over 9.2 million tons of domestic commodities in 2016, or three times more than the foreign trade through the three deepwater ports. In 2016, much of the domestic traffic through Connecticut’s ports was gasoline, kerosene, and fuel oils, followed by sand and gravel as well as iron and steel scrap.

Import/Export: In 2017, over 2.5 million tons of imports and 247,000 tons of exports moved through Connecticut’s three deepwater ports. The value of these commodities was over $1.1 billion. Imports and exports through Connecticut’s deepwater ports are largely of bulk and break-bulk commodities, with iron and steel, petroleum products, and salt and related products comprising the largest categories. Most of the international trade through Connecticut’s deepwater ports was through the Port of New Haven, with this port handling 87% of imports by volume and almost all exports by volume in 2017. Imports included petroleum products, such as home heating oil, gasoline, kerosene, diesel, and jet fuels along with salt, steel, and other products. New London handled 11% of imports by volume in 2017, and Bridgeport handled the remainder.

In terms of passenger vessels, Matthews knows the state has work to do. Much of the traffic going in and out of Newport and New York is simply sailing by without stopping. He insists, “If we have the proper facilities, we could entice them to stop for a night, as well as an alternate to Newport, or another New England port on their way up to Canada or wherever their ultimate destination is.”

On the intermodal front, without a true container port or container facility, Connecticut shippers are forced to truck their containers to an intermodal yard, typically in Massachusetts or New York. The solution will ultimately involve shortsea container-on-barge operations. In advance of that, conventional wisdom says that a fully functioning intermodal would need to first be in place.

In Connecticut, the fledgling CPA is moving forward, in ways never before contemplated. “It’s kind of a unique approach. It’s a work in progress, so to speak,” says Matthews, who also knows that CPA’s success will ultimately be defined by financial independence. “We’re working to create an asset base that produces revenues to support the functions of that organization without having a need to go to state legislature for a direct appropriation.” So far; so good. 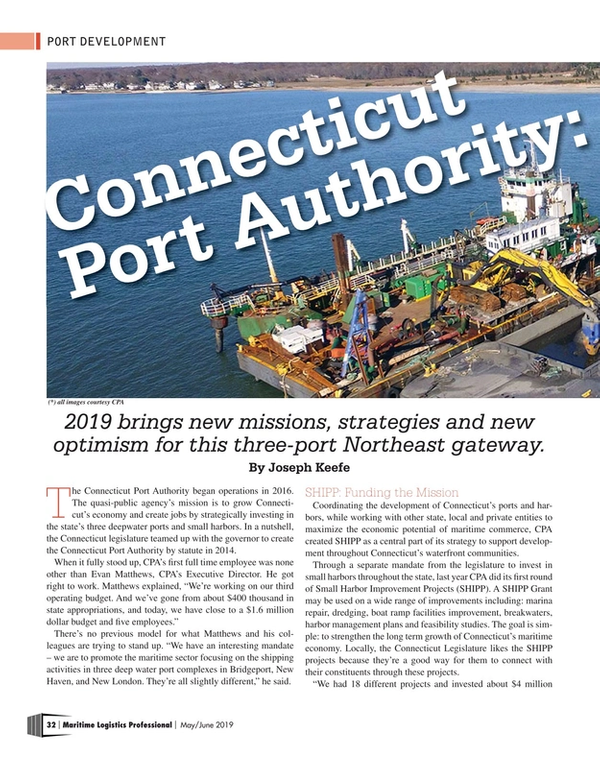