Ramping (Up) to Lift Port Production

As North America’s larger ports continue to increase capacity, dredging and air drafts are receiving the attention they deserve. As bigger post-Panamax boxships begin to arrive, none of that means anything unless truck turn times and TEU moves per hour can be improved. The innovative and evolving supply chain of cranes is the ultimate answer.

As 2019 passes its midpoint, the backlog 2019, one firm, Shanghai Zhenhua Heavy Industry Co., Ltd. (ZPMC), a global heavy-duty equipment manufacturer listed on the Shanghai Stock Exchange, finds itself as the undisputed leader of the container crane supply chain. That’s right: the supply chain itself. That’s because ZPMC’s turnkey model is unlike any other in this market sector, and its innovation arguably second-to-none. Moreover, the firm’s North American backlog is robust and it is growing.

At a time of unprecedented port growth in this hemisphere, there are very few variables which can slow this juggernaut. A trade war is one of them.

Politics
As the trade spat between the U.S. and China heats up, there is much at stake. ZPMC has as much skin in the game as anyone. In late June testimony before the U.S. International Trade Commission in Washington, port advocates weighed in on the issue. Glenn Wiltshire, Acting Chief Executive and Port Director at Port Everglades, testified, “It is of critical importance to the Port for the Committee to remove gantry cranes, classified in subheading 8426.19.00, Harmonized Tariff Schedule of the United States (HTSUS), from the list of items that would be subject to ad valorem duty up to 25 percent. A 25 percent duty would immediately increase Port costs by $10,350,000 for a current gantry crane order.”

ZPMC is currently the only company in the world that manufactures low profile super post-Panamax rail mounted container gantry cranes. There has not been a rail mounted container gantry crane manufactured in the United States in many decades. In separate testimony, Kurt Nagle, the outgoing President and CEO of the American Association of Port Authorities (AAPA), was more direct, saying, in part, “… we are deeply disappointed ship-to-shore cranes and other tariff codes that include port equipment are back on the proposed List 4 ... At a time when infrastructure investment is a national priority, we urge you to avoid increasing the cost of infrastructure through the imposition of new tariffs.”

As this issue of MLPro went to production, AAPA and its member ports were making best efforts to ake sure the ship-to-shore gantry cranes would not be added to the tariff list. That’s because the increased cost of these cranes might cause ports to rethink their expansion plans to handle the new mega-container vessels. It might also prompt them to look at yet another rapidly emerging ZPMC turnkey service.

Raising Cranes
The profusion of projects has become routine for ZPMC USA in its third full year as official service provider for ZPMC North America in the U.S. and Caribbean. ZPMC handles all of it in house. Beyond this, the firm has opened six U.S. service centers. Each service center serves as a central location for customers to get local service. Recently, the raising of existing cranes has become much more common. Price and timing are the two reasons why.

“It is a bit of both,” explains Jeff Rosenberg, ZPMC Crane Service’s VP of Sales & Marketing, who adds, “New crane deliveries are now 12-18 months away. We typically we can raise a crane in three to four months (after engineering), and at about one-third the price of a new crane.” That latter metric – with the escalating trade tensions – might become even more important. That’s because, says Rosenberg, new cranes are going for $10 to $12 million, and raising a crane costs about $4 million. Given the uncertainty in today’s trade climate, it isn’t hard to see why ZPMC’s unique ability to raise and/or alter an existing structure is so attractive.

In May, Rosenberg told MLPro that ten cranes at APM in Los Angeles had been raised; four more in Charleston and three of nine in New Jersey had been completed. Scores more, internationally, had also been accomplished. In fact, as much as 30% of ZPMC’s existing business involves crane alterations.

The same proprietary care and expertise that ZPMC applies to its new build efforts also goes into any alteration of existing units. That’s because, insists Rosenberg, it isn’t just about raising a crane, it involves doing it as efficiently as possible. “We also relocate cranes using our own SPMT’s (self-propelled modular trailers),” explained Rosenberg, who continued, “This is a big plus for the terminals as we can easily move cranes around to place them out of the way while they are being worked on, to avoid conflicts with terminal operations.”

Rosenberg makes it sound easy, but there is far more to raising a crane than meets the eye. Myriad design issues precede every operation. These include, but are not limited to:

As port customers are looking to upgrade local equipment, two big issues need to be considered when contemplating what to do next. Specifically, as they look for height, the weight of these new cranes is becoming a factor as existing docks were not built for the new wheel loads.

The purpose of ‘crane raising’ is to accommodate the large post-Panamax tonnage, but this involves (to date) an increase in height only, as opposed to also having an increased outboard reach. The higher crane really does provide that much more of an advantage, especially given the ever-increasing beam of these newer vessels. Rosenberg agrees, saying, “We haven’t been asked to extend any booms yet. I also believe there was some forethought on the part of the terminals, ordering cranes with booms for 22 TEU’s width.”

Now, as the enlarged Panama Canal brings exactly what was promised, that sort of forethought is also proving to be prescient. “Yes, it's all about larger ships. We are in the ‘raising cycle’ right now. Most terminals have at least a few new cranes large enough to attract the larger ships. Now they are raising their older cranes to increase capacity.” And, it goes without saying, quickly increase capacity.

Indeed, raising STS cranes is fast becoming the signature project for ZPMC USA. For his part, Rosenberg isn’t aware of any other firm that also plays in this sandbox. ZPMC has four proprietary jacking systems available for crane raise work in the U.S. that accommodates varying pier loading situations and height increases. Two of the jacking frames load off the dock, and two are designed to jack the crane from its own structure to avoid putting any extra weight on the pier. Rosenberg explains, “These are patented systems; devised and designed by ZPMC.”

The scope of these projects is enormous. In fact, the tallest port crane in North America was recently raised to that height by ZPMC, which raised the crane 33 feet (10.08 meters) to prepare for Ultra-Large Container Vessels calling at APM Terminal’s Pier 400. In a landmark project that kicked off July 1, 2016, ZPMC upgraded 10 cranes for APM’s Pier 400 Terminal. The cranes can now service ships carrying up to 20,000 twenty-foot equivalent containers (TEUs). Prior to this crane raise, the largest vessels that could be serviced at the Port of Los Angeles were 13,000 TEUs.

ZPMC
ZPMC impressively owns and operates 25 heavylift ships ranging in capacity from 60,000 to 100,000 DWT, delivering products all over the world. ZPMC North America is the operating company for North America, and ZPMC Crane Services is its North American service subsidiary. The firm boasts annual revenues of $5 billion and employs more than 30,000 personnel. With eight factories in the Shanghai area, the firm claims a 70% global market share of the STS Crane market. What is particularly noteworthy is that when ZPMC sells a crane, the sale often involves the manufacture of that crane, its transport from point A to point B, the dismantling and/or removal of the old crane and the in situ delivery of the new one. That menu is about to expand.

The firm delivered more than 200 STS cranes in 2016 alone. 2019, especially on this side of the big pond, promises more of the same. Nevertheless, and beyond the crane raising trend, ZPMC isn’t sitting on its hands. For example, automation is the hot topic now. Rosenberg told MLPro, “ZPMC has had numerous successful automation projects around the world. LBCT is the flagship in the USA.” Beyond this, a smaller, second hand crane market is emerging. Rosenberg says that ZPMC will get involved, when and if the project makes “regional” sense.

Clear Goals in an Uncertain Climate
The process of acquiring or shedding a container crane is a carefully planned event – in and of itself a supply chain; all its own. The success or failure of that kind of operation can be the ‘make or break’ for any port in the fast moving world of ever bigger boxships. No one wants to get left behind in the competitive quest to keep and grow TEU market share. Now, with the rapidly expanding crane raising option, ports not only get it done faster, it’ll be far cheaper.

International trade disagreements may drive the decision process, but if the newest post-Panamax crane is out of reach, it is likely that the raising of an existing one will not. If so, it is ZPMC that can be thanked, for that.

This article first appeared in the 2019 MAY/JUNE edition of Maritime Logistics Professional magazine. 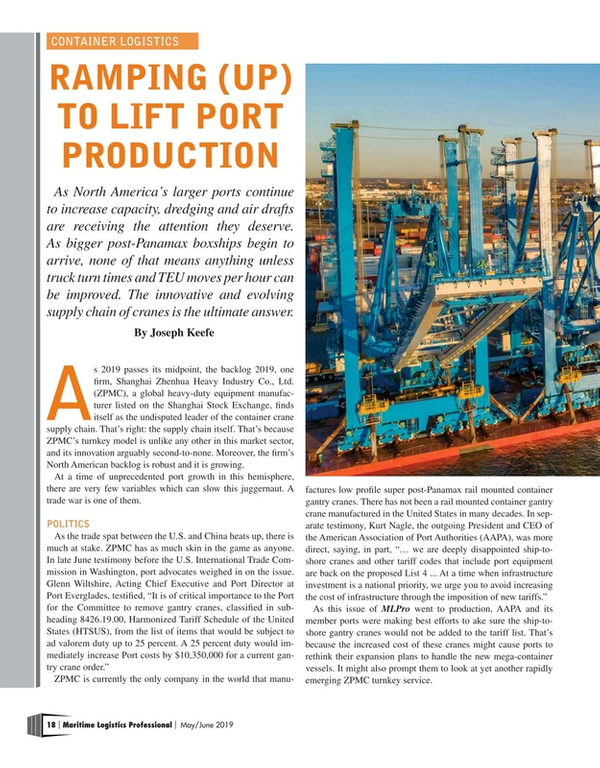