Large shipping losses are now at their lowest level this century having declined by over 50% year-on-year, according to Allianz Global Corporate & Specialty SE’s (AGCS) Safety & Shipping Review 2019. The annual study analyzes reported shipping losses over 100 gross tons (GT). AGCS provides global marine and shipping insurance for all types of marine risk, from single vessels and shipments to the most complex fleets and multinational logistics businesses. All told, the Marine Line of Business contributed 11% to AGCS overall premium volume of EUR 8.2bn in 2018.

Total Losses Down
In 2018, 46 total losses of vessels were reported around the shipping world, down from 98 losses 12 months earlier, driven by a significant decline in activity in the global loss hotspot, South East Asia, and weather-related losses (10) halving after quieter hurricane and typhoon seasons.

Captain Andrew Kinsey, Senior Risk Marine Consultant with Allianz Risk Consultant (ARC) told MLPro in June, “I’m not sure we can point to any one particular fact that’s the driver on the reduction in total losses. The total losses are down, but the cost of losses is still a big driver, given the size of the vessels and the size of the losses. We like to think that we’re starting to get a more mature safety management system in place. I can remember when they were first introduced, and there were growing pains when we did those first procedures growing up in those first audits. I can see a real change. We’re really starting to change the basic behaviors in the way we look at it.”

Machinery Damage: the major causation
The plummet in total losses is encouraging, but the number of reported shipping incidents overall (2,698 in 2018) shows little decline – less than 1% year-on-year. Machinery damage is the major cause, accounting for more than a third of the 26,000+ incidents over the past decade – twice as many as the next highest cause, collision. Machinery damage is one of the most expensive causes of marine insurance claims, accounting for US $1bn+ in five years.

Captain Kinsey, who spent 23 years at sea – 13 as Master – also weighed in on this metric. “We’re definitely looking at a lack of information being put out to the field. When you’re talking about having tech reps come in and overhaul machinery during a quick turnaround port call, and you don’t have the latest bulletins on the proper installation. Due to cost pressures, you have onboard ship staff conducting maintenance and then not properly installing the replacement parts, and it leads to losses.” Kinsey continued, “Also, if they’re trying to go to condition-based maintenance but they don’t have accurate monitoring, be it vibration or lube oil sampling, then unfortunately you can get into a situation where it’s run to failure. So it goes back to asking: we’re collecting all this data, but how are we using it? Are we really using it in the predictive model?”

Worst accident locations and common causes of loss
The South China, Indochina, Indonesia and Philippines maritime region remains the top loss location. One in four occurred here in 2018 (12), although this is significantly down from 29 a year earlier. Despite signs of improvement, Asia will remain a hotspot for marine claims due to its high level of trade, busy shipping routes and older fleets. However, newer infrastructure, better port operations and more up-to-date navigation tools will help to address challenges.

Defining root causes is complicated, insists Kinsey, who knows whereof he speaks, having sailed these waters professionally for many years. “It is diverse. It is crowded. There is a lot going on there and it’s shallow. Put that on top of the regional political tensions with the Chinese and the US and the other eight or nine countries that are disputing the sovereignty and you’ve got tensions running high and a lot of traffic. On the ferries, you’ve got secondary tonnage that is brought over. In the loss of life category – whether it’s Korea or down in the Philippines or Indonesia – we see a lot of overcapacity, older tonnage, and lack of inspections, unfortunately. So that’s really something we have to continue to be vigilant on.”

Fires continue to generate large losses on board with the number of reported incidents (174) trending upwards. This has continued through 2019 with a number of recent problems on container ships and three significant events on car carriers. Misdeclared cargo, including incorrect labeling/packaging of dangerous goods is believed to be behind a number of fires at sea. Meanwhile, the loss of hundreds of containers over board from a large vessel in early 2019 provides a reminder that damaged goods is the most frequent generator of marine insurance claims, accounting for one in five over five years.

“This is a real problem and we’re seeing it play out daily in the lower Mississippi River. We are seeing this loss of propulsion issue because, from heavy fuel to light fuel, you don’t have the same BTU per ton. You don’t have that same power per ton available. And, once again, it goes to training. Does the crew – and the office for that matter – understand how these new fuels are going to impact the performance of both main and auxiliary propulsion?”

Security threats evolve and challenge
Political risk has heightened around the globe and increasingly poses a threat to shipping security, trade and supply chains through conflicts, territorial disputes, cyber-attacks, sanctions, piracy and even sabotage, as evidenced by recent attacks on oil tankers in the Middle East. The growing number of migrants at sea and an increase in stowaways on commercial vessels also has serious consequences for ship owners, leading to delays, diversions and pressure on crew. Piracy incidents increased in 2018 to more than 200, and Nigeria is now the top global hotspot.
Kinsey explains, “With global piracy, we still have incidents but we do not have as many of the large-scale hijackings, because they don’t have a safe haven. What happened off the coast of Somalia, and in some cases in the South China Sea, they could make them disappear, or they had someplace they could home them until they got their ransom. Once again, it’s driven by economic pressures, just like the rise off Somalia, there’s always a root cause.”

Emerging risks: among them – complacency
According to AGCS, the growing number of incidents on larger vessels is concerning. Container-carrying capacity has almost doubled over a decade and a worst case loss scenario could cost as much as US $4bn in the future. Separately, autonomous shipping makes waves and, says AGCS, progress continues to be made, but they also warn that technology is not a panacea if the root cause of incidents and losses is not addressed.

Finally, and while safety-enhancing technology in shipping has been a positive for safety and claims, accidents continue to happen due to overreliance on these devices. All that said, we finished by asking Kinsey to weigh in on what he thought the biggest threat to shipping would be in the coming 12 months. “One of the biggest challenges that we face year-in/year-out in the maritime industry is complacency, says Kinsey firmly, adding “We really need to stay vigilant, and from a marine insurance sales point, we bang the drum regularly. I’m out on the road meeting with the insureds that I’m speaking and trying to get content out to say that. But we really have to stay vigilant and understand that shipping is a vital link in our global supply chain.” That’s because, in the day-to-day drudgery of seagoing operations, familiarity can breed contempt.

Kinsey and AGCS have it right: the international shipping industry is responsible for around 90% of world trade. There are around 60,000 merchant ships, transporting every kind of cargo. The world fleet is registered in over 150 nations, and manned by over a million seafarers. That means the safety of vessels is critical.

This article first appeared in the MAY/JUNE edition of Maritime Logistics Professional magazine. 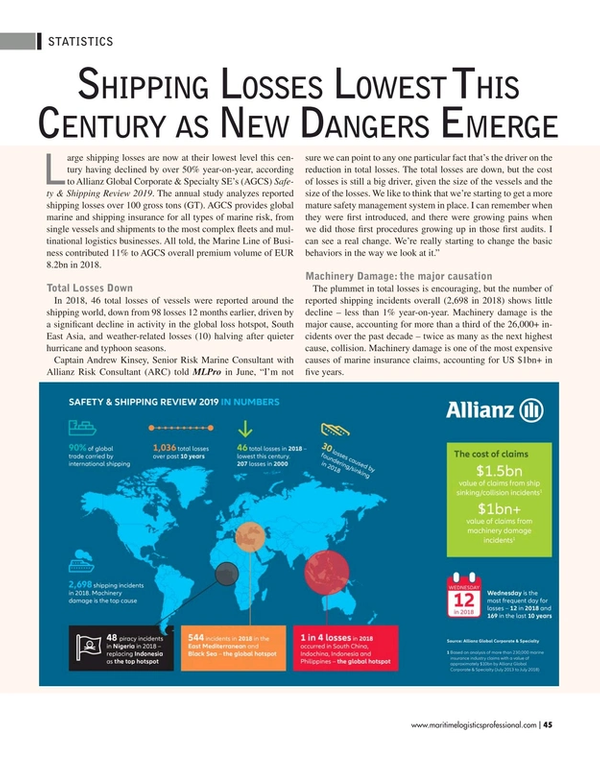