In the United States, landside infrastructure is at a crisis point. Congestion at the big hub ports, exacerbated by imperfect intermodal interfaces with surface transport serving cargo hinterlands is at the heart of the matter. As politicians bicker over a possible infrastructure package, the Highway Trust Fund, funded by taxes on gasoline and diesel fuel, has continued its downward journey towards further deficits (now $144 billion). And, where countless U.S. ports have reported record TEU volumes, an October 2018 report by the American Transportation Research Institute pegged the annual cost of congestion to the U.S. trucking industry at $74.5 billion in 2016.

These issues are not lost on transport planners; attention is increasingly moving to the water though coastal shipping must compete with surface transport modes. The trucking and rail lobbies are powerful and well funded, long entrenched with cargo owners. Eventually, when the discussion turns to shortsea shipping, container-on-barge and/or the uniquely American 53’ roll-on/roll-off modes have emerged as the preferred choices to improve efficiencies.

(Handicapping) the Shortsea Effort
Coastwise transportation in the United States requires American built tonnage. The projected costs of building a coastwise feeder vessel, handling containers delivered to deep draft ports and delivering for the final short leg to smaller niche ports, would drive the cost of (coastwise) waterborne transport to levels uncompetitive with truck or rail. Add to that the double whammy of the Harbor Maintenance Tax (HMT) when handling that container twice, and the formula has been shown to have no sea legs.

Separately, more than a decade after its inception, the U.S. Maritime Administration’s shortsea shipping initiative, the so-called Americas Marine Highway program, is finally gaining traction. The DOT’s initial justification for shortsea shipping was to reduce road congestion, but its mandate has now broadened to include environmental concerns and a more efficient supply chain.

Today, the federal government is finally giving the issue more than lip service. With freight levels expected to increase by more than 40% over the coming decades (Marad projections), a series of 2019 Marad grants saw $6.8 million awarded for three shortsea projects. $3.2 million went to a project sponsored by the Port of New Orleans, for continued buildout of a container-on-barge service that runs between Baton Rouge and New Orleans (route M-55). Another container-on-barge run, the Port of Virginia (and Norfolk Tugs), received $1.8 million to expand an existing service (M-64) between Richmond and Hampton Roads terminals. A similar amount, $1.8 million, went to Harbor Harvest, a newly launched service linking Long Island with southern Connecticut (circumventing the worsening I-95 and I-495 snarl in the NYC metro area.

The three programs mentioned above, today small in actual volumes, represent important nodes in the broader supply chain. For example, cargo loaded at Baton Rouge actually originates further up the river system. Seacor AMH, operator of the M-55 lower Mississippi River service, gathers empty containers out of Memphis (a junction point for Class 1 railroads), and barges them down to Baton Rouge. On the export side, increased petrochemical activity has led to an uptick in exports of cargo, notably polymer resin out of Louisiana. The containers are then loaded up and sent down to New Orleans.

In 2018, more than 27,000 boxes were moved in this way, off the highway, in a more efficient and environmentally correct fashion. Local entrepreneurs are even aggressively pushing for the construction of fit-for-purpose, self-propelled inland tonnage to greatly expand the effort between St. Louis and the GoM.

The Big Picture: show me the money
Previously a matter of congestion, efficiencies and the environment, shortsea shipping has finally caught the attention of the bankers. Edward M. A. Zimny, President and CEO of investment bank Seabury Maritime LLC recently weighed in with MLPro, saying, “With hub ports increasingly backed up on the landside, the big ports will need to work closely with their regional and complimentary regional ports. The new ecosystem will see multi-modal links on the landside, for cargo originating inland, but will also finally experience a viable coastal ocean alternative transportation, likely taking the form of container or trailer on barge, as a vital connector to out ports.” Asked to elaborate, he explained, “Examples of these feeds are the Delaware River ports, in between New York and Norfolk, and New London, on up the coast from New York/New Jersey. We've have been fortunate to be involved in a recent transaction advisory with both of these, and a regional offering is key to the value proposition to the two and their respective business cases.”

One project in the works, which has already garnered AMH funding after receiving Marine Highway designation is a potential barge service linking the Brooklyn docks in New York Harbor with Davisville, RI, on Narragansett Bay. In late 2018, $855,000 from Marad was earmarked for the purchase of dockside equipment in Rhode Island. Marad, in a prepared statement, said, “The barge service will include a dedicated run twice a week utilizing one 800 TEU capacity deck barge transporting north and south bound import and export cargo via the East River, Long Island Sound, Block Island Sound, and Narraganset Bay.”

If and when money becomes available, Marad could make more AMH awards in late 2019, twice in 2020 and 2021, and in early 2022. But Marad is not the only funding source; short sea services have benefited from regional funding sources. In New York, the EDC has issued a Request for Proposals seeking terminal operates who would contract barge operators to distribute food and produce presently moving through the Hunts Point market by truck. As contemplated, the EDC would re-purpose landside warehouses into a marine terminal, adjacent to the East River in the Bronx. This marine effort is part of a broader ‘Freight NYC’ initiative, described as a $100 million plan.

The EDC and the PANYNJ, working jointly, have also spearheaded formation of a new working group, the North Atlantic Marine Highway Alliance, which will identify cargo and explore barge transportation from Maryland to Maine. The new group’s mandate is support the realization of a financially viable, regional barge network.

Marad, in describing the nearly $300,000 award mentioned above, explained, “The grant will assist with funding a planning study to look at how marine highway services can be expanded throughout the Northeast region from New York Harbor to other points. The study will provide the data necessary to establish the business case to support shipping container movement by barge between terminals and beyond.”

Two Steps Forward; One Back
Not all short sea projects have been successful. A barge service linking Stockton, California with the deepsea container docks at Oakland saw more than $10 million in funding from DOT Tiger grants for cranes and other equipment. In 2015, after failing to attract even modest amounts of container traffic, the service was shut down. Various reasons were cited for its failure, among them the failure to cement a tie-up with a major ocean carrier. In the end, bad timing may have played a bigger role. Around that time, the cost of fuel had dropped precipitously, which worked in favor of surface alternatives.

Even the Richmond Express in Virginia took a decade to get on its feet, at no small cost. Maritime consultant Donald Frost, a Connecticut Port Authority board member, weighed in on the difficulties which face shortsea startups. “All short sea shipping proposals focus almost entirely on reducing highway traffic; nobody works with the cargo shippers,” he insists, adding, “The Gold Coast of Connecticut is too close by road to New York City, so the very competitive consumer goods sector opts for trucking. Certainly for consumer goods, in this age of Amazon Prime and just in time inventory, barges are too slow.”

Mr. Frost’s remarks hit home for this nascent but promising market. Consider that Port of Virginia CEO John Reinhardt brings an intimate knowledge of the industry and its influencers. He was previously the top man at Maersk’s U.S. subsidiary. Hence, it is probably no accident that fourteen ocean carriers offer bills of lading with RMT as the final destination or point of origin for cargo. The Richmond terminal also coordinates with Columbia Coastal Barge, a long established service in the mid-Atlantic with scheduled container on barge runs linking Norfolk, Baltimore and Philadelphia. As is the case with successful short sea runs in Europe, the waterborne route from Norfolk into Baltimore is actually shorter than a comparable highway run. After receiving 2019 AMH funds, Reinhart offered, “We are investing $700 million to expand the capacity at The Port of Virginia and it is important that we grow our barge capabilities in parallel.” And grow, it has: the service in 2018 moved more than 31,000 boxes between Richmond and Norfolk.

Like the James River run, the Seacor AMH service in Louisiana is a key part of petrochemical supply chain there. Scheduling is closely coordinated with ocean carriers, including CMA CGM, on the export side. To Mr. Frost’s point, congestion mitigation is a component of short sea success – but, not the only one.

Brent Dibner of Boston-based Dibner Maritime Consulting, told MLPro, “Sometimes, the simple economics of trucking cargo may defeat a well intentioned barge service. Where cargo is to be barged, there may well be a truck component, in the form of drayage costs and waiting time around a terminal. These can substantially increase the cost.” He continued, “In some cases, it’s very hard to compete with the truck economics.” At Richmond, VA, the barge terminal is very near to I-95, helping to make the barge competitive because of the convenient road/waterfront interface.

Lessons Learned
“Build it and they will come” does not apply when it comes to shortsea shipping. Rather, and as the concept evolves, it will be driven by the crushing increases in freight that Marad says will soon overwhelm domestic highways and rail. Similarly, the realization that largely under-utilized rivers and coastal waterways – what the Waterways Council, Inc. (WCI) calls the ‘silent R’ in our intermodal equation – deserve the same consideration as every other aspect of the greater supply chain, will yield yet another gem of wisdom.

The supply chain is only as strong or as bad as its weakest link. At the moment, that weak link is the inefficient interface between ports and the hinterland. And, that’s got to change. Shortsea shipping can get us there.

This article first appeared in the MAY/JUN edition of Maritime Logistics Professional magazine. 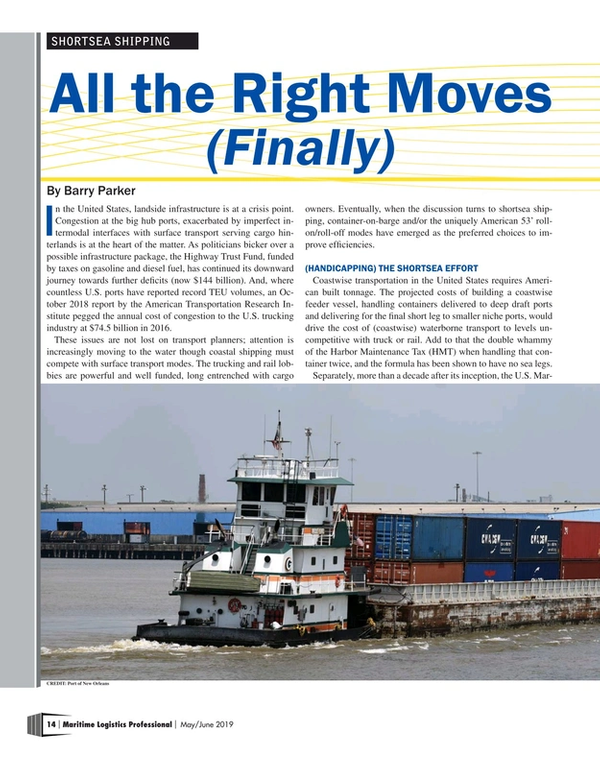