McCall Boat Rentals, which in 1975 launched the first quadscrew offshore boat, also built by Gulf Craft and powered by George, foresees several distinct advantages from the five-screw application. Owner Norman Mc- Call of Cameron, La., expects better maneuverability with the vessel's three rudders, increased reliability and safety factors from the use of five engines, and an extension of his company's con cept of interchangeability of engines.

The Joyce McCall II is powered by the new George Engine Company modified 12V92 TI engine, rated at 640 shaft horsepower at 2,100 rpm. George installed the intercoolers and fabricated the w a t e r - c o o l e d rearmounted exhaust manifolds, and relocated the turbochargers to the rear of the engine to better suit the workboat installation.

This summer, McCall Boat Rentals took delivery of the quad-screw Kelly McCall from Gulf Craft, the second such installation of 12V92 TIs delivered by George.

Billy Pecoraro, general manager of Gulf Craft, anticipates a loaded light speed of 25 mph at 2,100 rpm and a loaded deck ton- connage of at least 150 tons. The Joyce McCall II can carry 78 passengers and has a clear deck space of 70 feet by 23 feet. It is equipped with five water tanks for a total 19,000-gallon capacity, can carry up to 8,000 gallons of fuel, and has a 6-inch fire pump powered by a Detroit Diesel 4-71 capable of pumping 1,000 gpm.

The new vessel is expected to operate in the Louisiana-Texas Gulf waters with a certification of 200 miles offshore. It will be operated by a four-man crew. 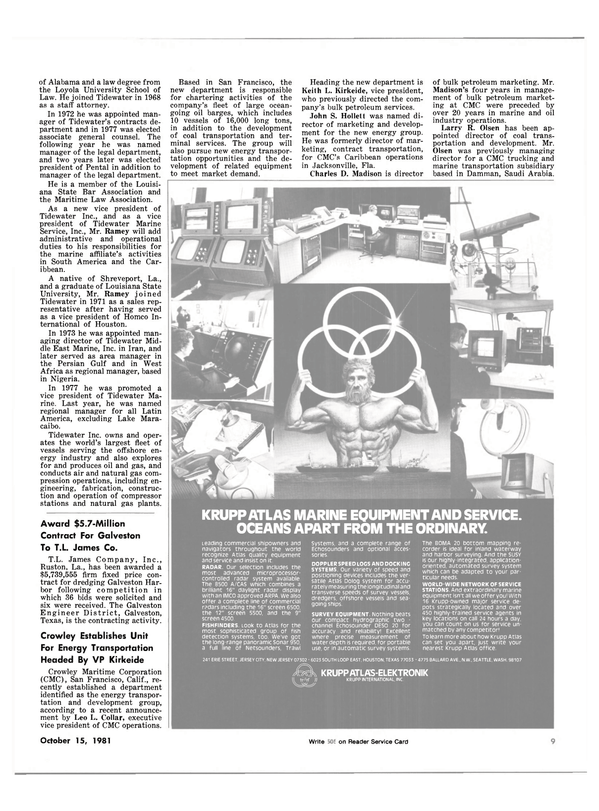