The 100-foot a l l - a l u m i n um crewboat Oil Corsair (shown above) was loaded aboard the Japanese freighter Seki Rokel recently in New Orleans for service in the waters offshore Angola in West Africa, highlighting a "first" for the shipbuilder.

Built by Progressive Shipbuilders and Fabricators, Inc. of Houma, La., the Oil Corsair will be operated by Ocean Inchcape Limited, (Overseas D i v i s i o n ) for Texaco . . . and is now the first boat built by Progressive to be shipped to Africa, Joe Steverson, president of Progressive, said. He hailed the event as a significant milestone in the history of his company, which has been constructing vessels for the offshore industry for the past three and a half years.

The design and construction of the vessel was praised by Capt.

The Oil Corsair will be the second crewboat to be put into operation in Angola for Ocean Inchcape, Ltd., but the company currently operates a fleet of vessels in offshore locations in West Africa and elsewhere, according to Mr. Thompson and Mr. Lester.

Especially designed for service under the most rigorous conditions, the Oil Corsair carries 3,000 gallons of fuel and 600 of potable water. She has a cruising speed of 22 knots and is powered by three GM Diesel Allisons Model 12V71TI. The boat has a 22- foot beam and her above deck loading area is designed so that she is capable of carrying 35 percent more cargo than boats of similar dimensions, Mr. Steverson said. The Corsair also has the capability of pumping extra water and fuel in emergency situations, which Mr. Steverson called "a real asset in cases of emergency on the rig." The vessel's full instrumentation package includes radar, loran, single-sideband radio, VHF radio and Fathometer.

The ship's interior is air-conditioned.

Its seating capacity is 56 and the crew quarters include accommodations for five plus captain's stateroom.

"We are proud that our first African vessel will be operated by Ocean Inchcape," Mr. Steverson said. The company, along with its sister company OIL (Asia) Ptd.

Limited, operates more than 70 vessels of different classes, worldwide, since 1972. The United Kingdom-based company has been providing a variety of marine support operations for oil terminals since 1971.

In addition to 100 and 110-foot class crewboats, Progressive also builds smaller crewboats ranging in size from 32 to 65 feet, patrol boats, custom pleasure yachts, jackup barges and other types of boats for service to the marine and oil industries. 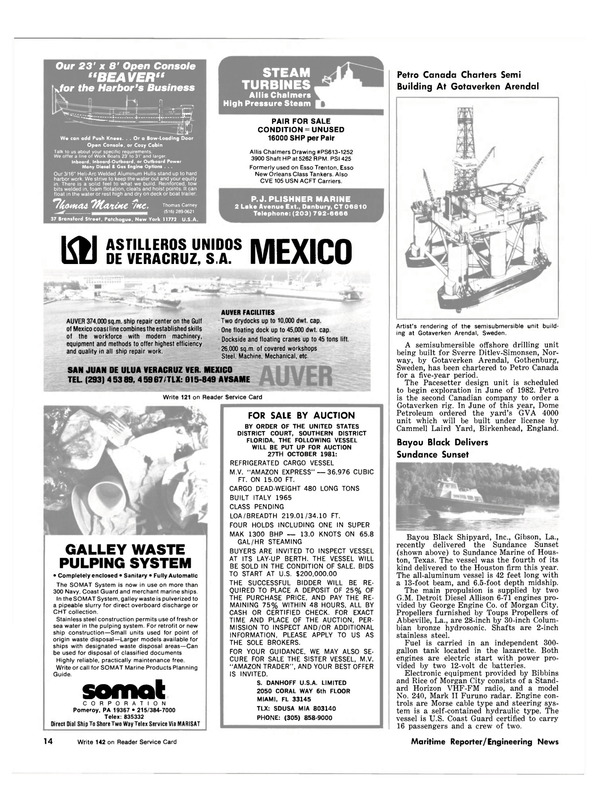