A $3-million vessel traffic control system covering the 12-mile harbor approach at Gothenburg, Sweden, will be installed by Norcontrol of Norway, one of the A.S.

It is anticipated the system will be in service by the fall of 1982.

Similar systems have been installed by Norcontrol in the Bay of Campeche, Gulf of Mexico; Magnus Field, North Sea; and in Teesport, U.K.

All vessel traffic in the area will be monitored by the three radar units of the system and the data will be forwarded to Gothenburg harbor control and communication center, where the vessels will appear as pictures on four-color screens. The duty officer in the center will receive a constant overall impression of the entire traffic pattern, including chart data and information on the vessels' course, speed, and position.

The raw radar data being transmitted to the control center by a newly designed band compression link, made by L.M. Ericsson of Sweden, will be overlayed with synthetically generated traffic and cartographic data such as actual fairways/navigation channels, submarine cables, buoys, speed, and course vectors of the vessels.

The system incorporates a digital scan converter which, as the name suggests, converts raw radar data from analogue into a digital format. This enables the system's computer to very accurately plot and display target data almost instantaneously. The raw radar picture and the synthetically produced chart data are displayed on high resolution color monitors that permit full daylight viewing. In addition, data from each radar will be processed and displayed on three dedicated display consoles.

Based on information on the screens, the communications center will be able to advise the vessels' masters of impending problems and advise them of necessary steps to avoid the problem. Swedish harbor authorities are convinced this vessel traffic control system will significantly reduce accidents due to incorrect course, groundings, or collisions. 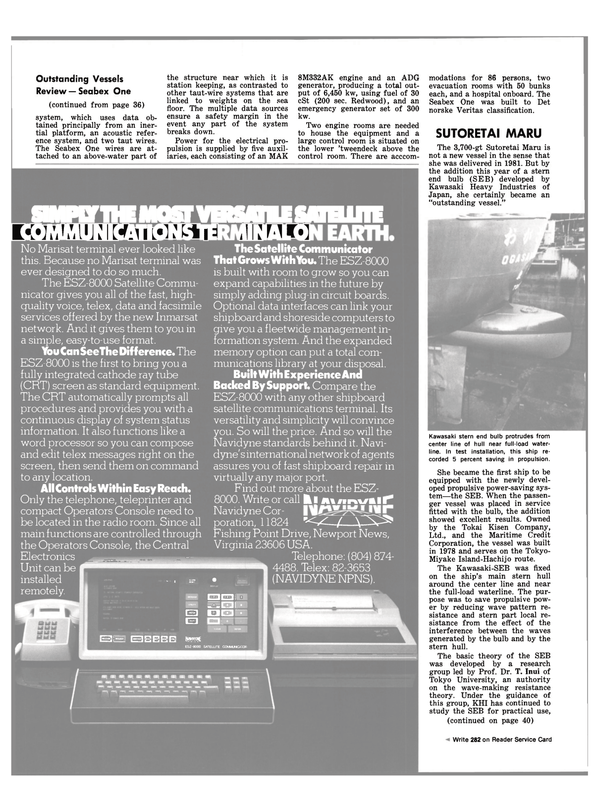