National Steel and Shipbuilding Company, San Diego, Calif., reported that a contract option for approximately $13 million has been exercised by the U.S. Navy for the regular overhaul of the U.S.S. Cayuga (LST-1186) A contract awarded by the Navy to NASSCO in October 1982 provided for the regular overhaul of the U.S.S. Tuscaloosa (LST-1187) with options for similar overhauls of four additional LSTs—Cayuga, Frederick, Peoria and Bristol County. Each option will be exercised separately; if all options are exercised, the total value of the contract will be approximately $80 million.

Work on the Tuscaloosa commenced at NASSCO in June and is expected to conclude in early December. The Cayuga is scheduled to arrive at NASSCO on September 22 for an approximate eight-month overhaul period.

The Tuscaloosa, Cayuga, Frederick, Peoria and Bristol County were built by NASSCO during 1967-72 as part of a 17-ship contract fulfilled for the Navy by NASSCO.

NASSCO's current backlog is approximately $670 million, which includes $64 million of repair and overhaul work, including the Cayuga.

In addition, NASSCO has Navy options for an additional $265 million of work which is not included in the backlog. 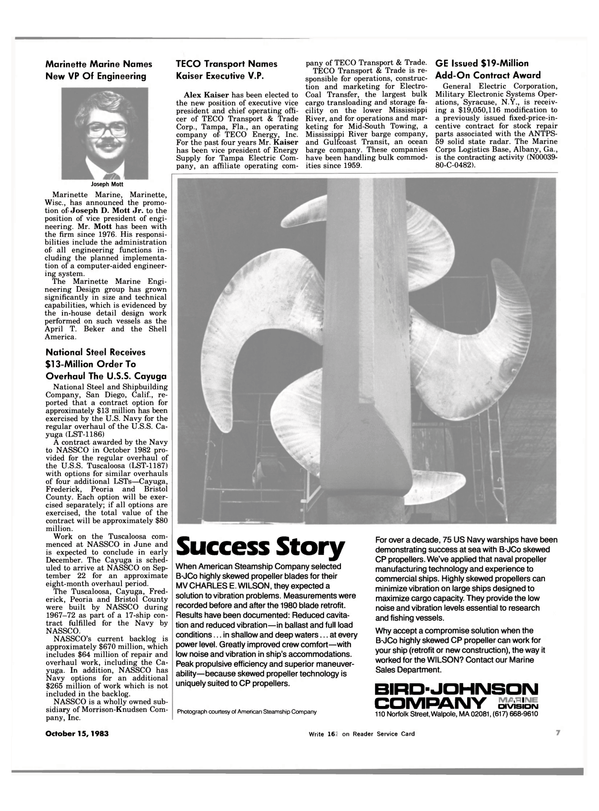