Tenneco Inc., Houston, Texas, recently announced that two of its subsidiaries and a Norwegian company are forming a joint venture, Argosy Offshore Ltd., to own and operate oil field service boats in the Gulf of Mexico.

Tenneco Oil Exploration and Production and Philadelphia Life Insurance Company, both Tenneco Inc. subsidiaries, and Wilhelm Wilhemsen of Oslo, Norway, have agreed to a plan under which about 20 vessels will be used to support Tenneco Oil's extensive exploration and production activities in the Gulf, Tenneco said.

About half the vessels, Tenneco said, are relatively new and have been in limited service in the Gulf.

Argosy Offshore will be headquartered in Lafayette, La. Operations will be headed by general manager Fred Lentjes, formerly with Tenneco Oil. Boats will operate out of Intracoastal City, La., and Sabine Pass, Texas. Crews will be U.S. citizens, Tenneco said.

Tenneco said it anticipates the operation will meet the requirements of about 35 per cent of its current service boat needs. The remainder of its boat services will continue to be contracted from other operators.

"Tenneco Oil's decision to own and operate its own boats follows studies that indicate it is economically feasible to do so," explained Phil Oxley, president of Tenneco Oil Exploration and Production.

The operation, Tenneco said, could provide about 150 jobs within the first year if all construction options are exercised. Startup is anticipated during the last quarter of this year. 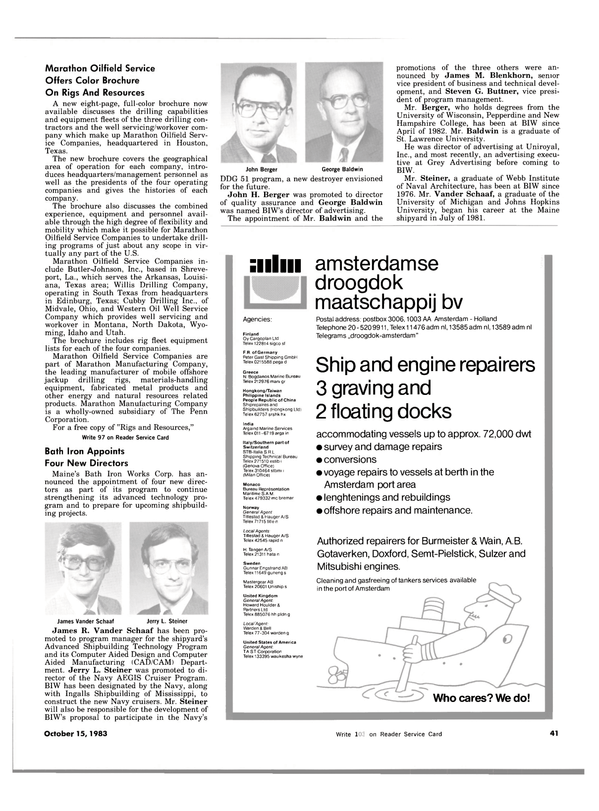 Read Tenneco In Joint Venture To Operate Its Own Service Boats In Gulf in Pdf, Flash or Html5 edition of October 15, 1983 Maritime Reporter