Wider Range Of Services Offered The new Baltimore Marine Division of Bethlehem Steel Corporation "will make us more competitive and will enable us to respond to the needs of the reduced marketplace more effectively," declared David H. Klinges, president, marine construction.

In January, Bethlehem announced that it would divest its shipyards in Beaumont and Port Arthur, Texas, and the Republic of Singapore and consolidate its marine construction business at the Sparrows Point shipyard.

The decision to sell the three yards was necessitated by poor market conditions and the resulting lack of adequate profitability for the work that was obtained.

The new division will market and produce offshore drilling platforms, ships and other types of marine products and provide a full range of vessel repair and modification services.

Acquired by Bethlehem in 1916, the Sparrows Point yard has the capability to build and repair a wide range of vessels and fabricate a variety of structural components and industrial products.

The yard recently began leasing a floating drydock which allows it to handle deeper draft vessels, such as cruise ships, ore carriers, containerships, naval combatants, auxiliaries and amphibious vessels. The drydock, with a lifting capacity of 44,000 tons, "is a valuable supplement to our 1,200-foot-long graving dock and increases our competitive position in the marketplace," Mr.

Because of the drydock's capabilities, the yard has been successful in attracting repair business. "In fact, Mr. Klinges said, "we've been fully booked with drydock work since that facility went into operation." Current major work at the yard consists of a $130-million contract to build two oceanographic ships for the U.S. Navy and a contract in excess of $30 million to build 15 steel sections for the Interstate 664 tunnel crossing at the Hampton Roads area or Virginia. The first steel section was towed recently to the construction site. The last tunnel section is scheduled to be delivered early next year.

Workers are putting the finishing touches on the oceanographic ship, USNS Maury, which will be delivered to the Navy late summer. Her sister ship, the USNS Tanner, is scheduled for delivery next February.

Bethlehem is continuing to bid aggressively for new work for the Sparrows Point yard which currently has a workforce of approximately 1,800.

Turning to the state of the industry, Mr. Klinges said that the problems now facing the nation's shipbuilding industry are primarily due to ineffective Federal maritime policies and foreign shipyard subsidization practices.

He continued: "Today, over 90 percent of American shipyards are supported by Navy work. Without commercial work, naval construction cannot support the industry." On the bright side, however, Mr.

Klinges said that he was pleased with the findings of the report presented to President Reagan by the Commission on Merchant Marine and Defense, which was created in recognition of the threat posed by the inadequacy of the nation's merchant marine fleet and its shipyard mobilization base.

"The report's conclusion—that governmental programs to deal with the 'deteriorating condition' of the maritime industry must be accorded high priority—is consistent with the position the industry has taken over the last several years, in Congressional and other forums, in citing the deep distress which all segments of the industry are experiencing," he said.

The commission appointed by the President also recognizes any current program must incorporate a committment to build ships for American owners in American shipyards to be manned by American seamen to support commercial and military requirements alike in the event of an emergency.

"American shipbuilders," he continued, "stand ready, willing and able to participate in any rational program which would meet the necessary security objectives of this nation.

Programs which would ensure increased participation in American trade, transporting imported automobiles in American vessels and constructing handy-size tankers and cruise ships vital to American needs as military auxiliaries could well be a major start in redressing our current inadequacies." For free literature on the shipbuilding, ship repairing, conversion and rig construction facilities offered by Bethlehem Steel-Sparrows Point, Circle 15 on Reader Service Card 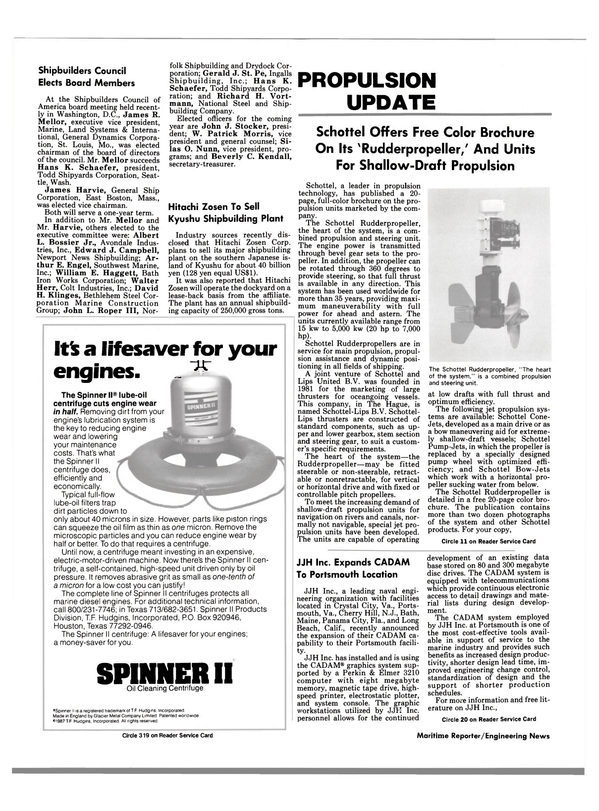