Well suited for deep-sea vessels, the 2690BT series ARPA and TM/ AC display are easy to operate with large, individual function control buttons. The basic radar controls on the upper panel follow the standard Racal-Decca layout used in thousands of Master series 20-inch color radars already in use at sea.

The clear advantages of this system are its exceptionally bright color presentation of radar video, synthetic graphics and tote information on a 26-inch DSC display.

The 26-inch DSC Racal Decca marine display has been specially designed to meet the requirement for a presentation that can be interpreted quickly and surely under all conditions.

Switchable color coding minimizes eyestrain by day or night and allows the display to be viewed conveniently under a variety of lighting conditions.

This easy-to-operate ARPA has a 20 track capacity with manual or automatic target acquisition. The unit's ARPA controls are located on the lower panel, arranged according to function in a logical layout.

In addition to their standard suites of eight video maps, the Racal- Decca 2690BT Series ARPAs can be supplied with an NMEA 0183 proprietary interface to a navigation system such as the Racal- Decca MNS 2000 or Decca Navigator Mark 53. This interface enables the operator to show on the ARPA range scales (1 Vi to 24 nm) a graphic presentation of the voyage plan.

The same interface also enables the ARPA to receive from the associated navigation system a defined position in latitude and longitude, preset to correspond to the reference point around which one or more of the video maps in the ARPA memory has been constructed.

The ARPA can calculate the range and bearing of this point from the ship's position and thus provide automatic alignment of a video map.

The Racal 2690BT Series features a full range of 3 cm and 10 cm marine radars designed to comply with international type approval standards for the largest vessels.

Other features of the series include: AC display with anti-collison markers, parallel indexing, true motion guard zones and semiautomatic electronic feature; an advanced clutter control called "Clearscan" to clear sea and rain clutter from the display; and a console design which offers the option of three preset viewing angles—11 degrees, 23 degrees and 35 degrees.

The LSR 4000 (Live Situation Report) display comprises a high definition color monitor with associated processor. This unique system provides a dynamic summary of all data relevant both to general navigation and immediate conning of a vessel. It also displays on demand the full voyage plan which is automatically updated.

The Racal-Decca MNS 2000 is a multi-sensor marine navigation management system, designed to a module concept. The system can derive position fixing data for vessel navigation purposes practically anywhere in the world through its multi- sensor radio navaid receiver unit.

It is able to interface to compatible ARPAs, autopilots, plotters and vessel management systems.

The MK53 Decca Navigator is a four-channel integrating narrowband receiver incorporating both Normal and Lane identification pattern positioning with full worldwide chain coverage. It has been designed to operate in conjunction with both electromechanical and color video plotters. The MK53 also incorporates a navigational computer which can interface with other bridge equipment such as radar, au- tomatic chart table and autopilot.

The Racal 970/990 Series of gyrostabilized radars is designed for use aboard vessels up to 1,600 tons. The compact 14-inch diagonal screen has 10 range scales from Vi nm to 96 nm.

The Integrated Ship Instrumentation System (ISIS) 250C Series offers monitoring and control of main and auxiliary machinery, cargo and ballast from one or more locations. It fully meets the requirements of the major international classification societies for unattended machinery spaces.

The ISIS 250 microprocessorbased Integrated Ship Instrumentation System consists of a series of standard units and modules that may be configured together to accommodate a wide range of alarm and monitoring specifications— from simple alarm detection on small vessels to the most demanding requirements of the largest marine, naval and offshore installations.

For a free package of color brochures detailing the new 2690BT color ARPA and other Racal marine navigation products showcased at the exhibition, Circle 74 on Reader Service Card 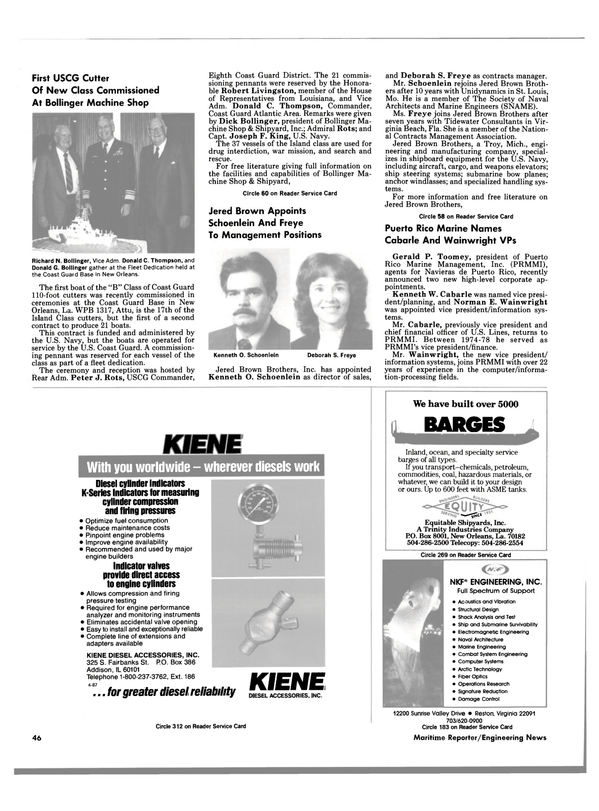