Pittsburgh, Pa.—June 8-10 1988 Ship Technology And Research Symposium To Be Held In Conjunction With 3rd International Marine Systems Design Conference The Society of Naval Architects and Marine Engineers (SNAME) will hold its 1988 Spring Meeting/ Ship Technology and Research (STAR) Symposium at the Pittsburgh Hilton & Towers Gateway Center, Pittsburgh, Pa., from June 8 to 10. The meeting and symposium will be held in conjunction with the 3rd International Marine Systems Design Conference (IMSDC). The event, sponsored by the Great Lakes/Great Rivers Section of SNAME, will bring together more than 300 members of the international community from at least 11 nations.

The focus of the 1988 STAR Symposium will be new technologies and analysis capabilities which are emerging within the mafrine research community. A special feature of the program will be a series of papers presented by the SNAME Technical & Research Program's Ships' Machinery Committee on a variety of new technologies. Some of the papers featured by the committee include: "Fundamentals of Optical Fiber Communications"; "Glass Reinforced Plastic Material for Machinery Applications Aboard Ship"; and "The Intercooled Regenerative Gas Turbine." The aim of the IMSDC, which meets only once every three years, is to promote marine design as a professional discipline and science. The first meeting of the IMSDC, held in 1982, was hosted by the Royal Institution of Naval Architects in London, England. The second meeting, held in 1985, was sponsored by Skibsteknisk Selskab (The Danish Society for Naval Architecture and Marine Engineering) in Lyngby, Denmark. The emphasis of the 3rd IMSDC will be both the theoretical aspects of the marine design process and recent new design applications for ships and offshore projects.

In addition, a full and diverse social program has been planned.

Beginning Wednesday, June 8, with an Early Bird Reception, and running through the close of the meetings, are activities such as the Three Rivers Arts Festival, offering a selection of arts, crafts, food, drink and entertainment; tours of the city's cultural sights and attractions; the President's Reception on Thursday, June 9; and a three-hour river cruise on the Allegeny, Monogahela and Ohio Rivers on June 10.

The Society of Naval Architects and Marine Engineers, founded in 1893, has a membership of almost 12,000 composed of a variety of shipbuilding and maritime-related professionals.

A hybrid propeller concept is presented in which the blades incorporate the technologies of both subcavitating and supercavitating propellers.

10 a.m.—"An Advanced Method for Design of Optimal Ducted Propellers Behind Bodies of Revolution" (SNAME), by Michael Schmiechen and Lian-Dizhou.

An advanced method is proposed which requires no explicit assumptions about effective wake fraction and thrust deduction at any stage. It is not restricted further to moderate propeller loading, small hub/diameter ratio, or ideal fluid behavior.

Autonomous Underwater Vehicles (AUVs) have received increasing interest in recent years as a tool for some demanding marine tasks. A control architecture for an AUV based upon a number of technologies from artificial intelligence is described.

An integrated management system installed on a floating production vessel operating in the North Sea is described.

Efforts to develop software techniques for ship's operation have succeeded in producing a Computer- Aided Navigation System (CANSY) in cooperation with sympathetic shipowners.

A new method is presented for incorporating production considerations into concept design of ships and their structures.

Aspects of customer and market orientation in design are discussed.

The focus is directed to the possibility of the application of marketing principles in the shipping industry, aiming at improving marine transportation system design.

The task of integrating seakeeping analysis into the conceptual design stage of the design process, so as to facilitate a high degree of designer interaction, is discussed.

The particular analysis tools used with this process are described. Examples of application are included in connection with the design of a RO/RO vessel, and in the context of sensitivity analysis.

Contrary to the prevailing thinking, a hull form cannot be developed during the short time allowed for the preparation of a tender. This statement is supported by examples taken from 20 years' experience. A newly developed hull form for fast, single-screw vessels is presented.

This form can reduce the propulsive power by up to 25 percent compared with ordinary multi-screw vessels.

2:30 p.m.—"The Components of the Propulsive Efficiency of Ships in Relation to the Design Procedure" (IMSDC), by SV AA Harvald and Jan M. Hee.

The designer has to match the characteristic power curves for the ship and the propeller. To accomplish this, the propeller efficiency, relative rotative efficiency, and hull efficiency must be estimated. The designer must also know the manner in which these efficiencies have been estimated and their accuracy in order to incorporate the right corrections and safety factors. A long series of experiments have been carried out to provide the understanding and data needed to estimate components of the propulsive efficiency of ships in the early design stage.

A current method of designing hull forms for high value-added ships is presented.

A new technique for the manipulation of the shape of curves and surfaces using interactive graphics is presented. The mathematical background for the direct manipulation of plane and space curves will be described.

An opportunity to informally continue technical discussions of some of the topics of the Thursday afternoon IMSDC Technical Sessions.

This mini-symposium has been organized by the SNAME Ship's Machinery Committee to focus on recent and current research and development which are affecting marine machinery. The following short talks will be presented in the threehour session: "Fundamentals of Optical Fiber Communications," by Dan L.

The hydrodynamics of flare impact are modeled by assuming that a pressure release surface exists on the mean water surface. While this simplified boundary value problem ignores some important impact features, it has the significant advantage of being computationally simple.

With this theoretical model, it is possible to include three-dimensional effects that are ignored in previous two-dimensional theories.

Results of experimental drop tests of bow-shaped bodies are compared with both the two-dimensional and three-dimensional theoretical calculations.

3 p.m.—"Surface Effect Ship Loads: Lessons Learned and their Implications for Other Advanced Marine Vehicles" (SNAME), by Paul Kaplan and A. Malaholf.

This paper describes a method for advanced ship structural design, and proposes the use of reanalysis of ship structures as part of ship hull condition monitoring and maintenance.

Development of knowledge-based expert systems (KBES) has become a major research activity within the field of computer aided engineering.

Two of the most challenging application areas are design and planning.

SEAMAID and LIFT are two prototypes that specifically address KBES development for marine engineering use.

Teaching design on an assignment basis has proved to be very motivating for students and teachers.

The paper presents a review of instructions to students, the grading system, and an account of time spent on the course by teachers, instructors, and students.

The classic basic design spiral does not include any sector or loop that raises the issues of operational aspects in the human behavior sense. The paper discusses why the basic design spiral and process have to be improved in principle and what new design strategies may look like.

Three-dimensional CAD/CAM techniques developed by two British shipyards for the multi-disciplined design and detailing activities through the production process will be discussed. 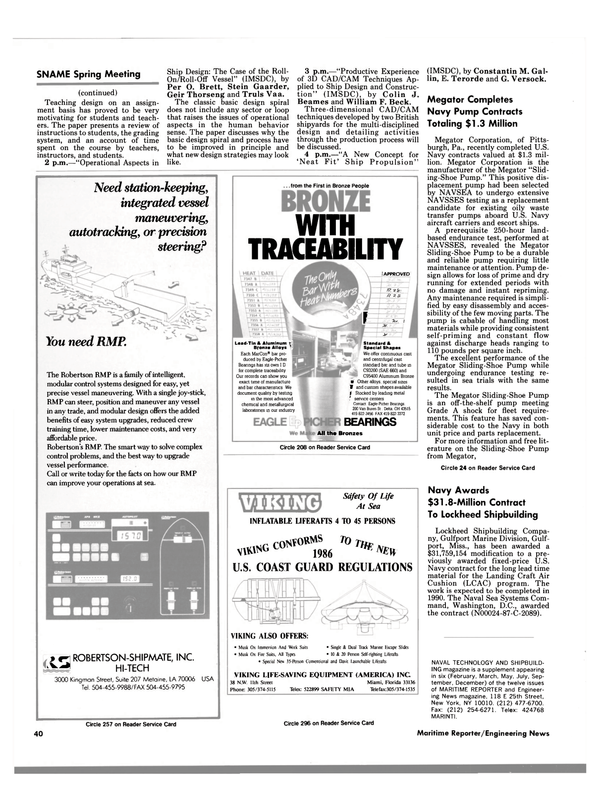