Since the seminal events of September 11, 2001, it seems like every U.S. federal agency concerned with maritime commerce has enhanced its requirements relating to advance notices of arrival for ships, cargoes, and persons coming to the United States. One federal agency mariners had largely ignored also dipped its toes in these waters, only to withdraw, at least for the moment. This article will provide an overview of current federal requirements relating to advance notices of arrival. Like so much in the field of maritime security, these requirements change quickly and this article might be outdated by the time you read it - but here goes.

Coast Guard Advance Notice Requirements Traditionally, the U.S. Coast Guard required ships coming to U.S. ports to provide it with an advance notice of arrival at least 24 hours prior to arrival. The elements that had to be reported were fairly basic. This laid-back system changed drastically with the October 4, 2001 publication of an emergency temporary rule that did three major things: (I) it expanded the amount of information that had to be reported; (2) it required submittal of information (for most ships) at least 96 hours prior to arrival; and (3) it eliminated various exemptions to the reporting requirement.

Advance Notice of Arrival The Coast Guard has now modified the emergency rule and made it permanent. As of April 1, 2003, ships coming into U.S. ports will be required to submit reports to the Coast Guard that largely resemble the ones submitted since October 2001, but with various changes.

The list of ships exempted from the reporting requirement has been adjusted only slightly. The list of 'certain dangerous cargoes' that must be specially reported has been limited to only those cargoes deemed by the Coast Guard to pose the greatest risk to maritime safety and security.

The differentiation between crewmembers and persons on board in addition to crew has been sharpened, but the amount of information required for each person is largely unchanged. The Coast Guard is extremely concerned about the accuracy of this information. If it boards a ship and finds material discrepancies between the list submitted and the persons actually on board, the ship will be delayed while the matter is resolved to the satisfaction of the Coast Guard and immigration officials.

In addition, commencing July 1, 2003, the Coast Guard is mandating that ships required to present advance vessel cargo declarations to the U.S. Bureau of Customs and Border Protection (nee U.S. Customs Service) submit such information electrically utilizing the Sea Automated Manifest System (AMS). This latter requirement is highly unusual, as it has one agency directing how to comply with another agency's requirements. This is a sign of the new times. Maritime security provisions are changing rapidly and some of the usual routines are being circumvented. In addition, this represents some of the new inter-agency cooperation resulting from formation of the Department of Homeland Security. It is anticipated that the Bureau of Customs and Border Protection will soon issue its own regulations in this regard, allowing the Coast Guard to recede on this point. 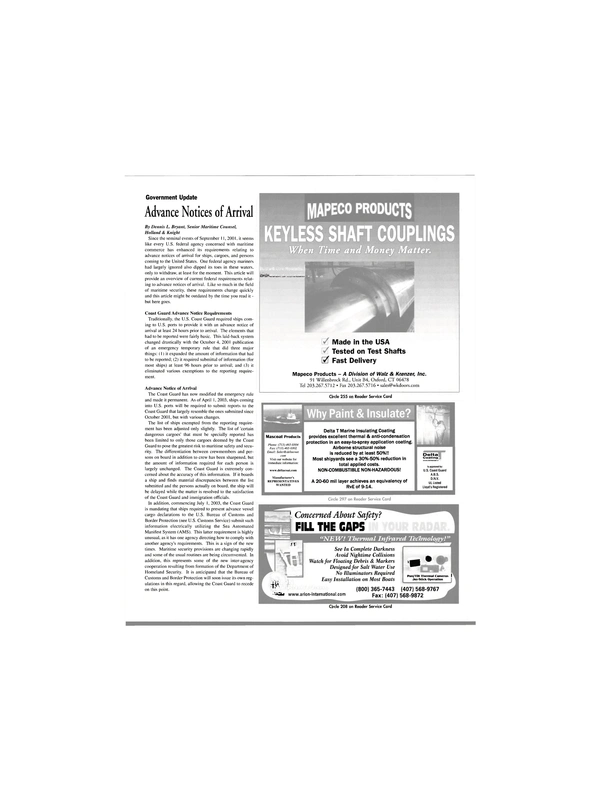