As the culmination of nearly 12 years' research and development work, and a pointer to the direction of two-stroke diesel propulsion technology. MAN B&W has rolled-out its first purpose-built, electronically-controlled lowspeed engine. Produced at the group's versatile Frederikshavn plant in Denmark, the camshaftfree 7S50ME-C engine is claimed to offer a range of operating, cost and environmental benefits, and will be fitted in a 37.500-dwt newbuild for Norwegian chemtanker specialist Odfjell.

Odtjell's bold decision to nominate the ME concept, and so dispense with conventional control arrangements based on camshaft drive, follows its experience with a modern tanker powered by a two-stroke 6L60MC engine adapted for full electronic command in November 2000.

The 14.160-bhp installation in the 37,000-dwt Bow Cecil has continued to be run in full electronic mode across the ship's entire trading profile, having now completed 10,000 service hours in 6L60ME format.

The operating flexibility and reliability achieved to date with the prime mover in Bow Cecil has vindicated the owner's early receptivity to the technology, and also inspired confidence in the concept across a broader front, such that Odtjell's move has been followed by commitments from other fleet operators to ME engines for newbuild projects.

"MAN B&W is convinced that the ME engine will overtake the conventional engines in the course of the next decade," said Peter Sunn Federsen, executive vice-president, in charge of the two-stroke business unit within the MAN B&W Diesel group. "For shipowners, the purchase of the large ME engines will be cost-neutral, maybe even cheaper. In operation, the engine can save money, partly because the fuel consumption is lower at part loads, and partly because savings are made in maintenance," he added.

The ability to optimize the plant for, say, exacting criteria governing smoke emissions in certain ports is indeed a valuable environmental feature, but this goes hand-in-hand with the wider, practical goal of achieving the best combustion at every stage in the vessel's operating profile. The electronic arrangements incorporated on Bow Cecil's engine, for instance, have facilitated tuning to the widely differing properties of the heavy fuel oil bunkered at a number of locations around the world.

The ME program is a pillar of MAN B&W's technical endeavors to maintain its pre-eminent position in the global two-stroke propulsion market. The development project has entailed total expenditure of approximately $ 14.5-million, and absorbed 215 man-years on the part of 60 engineers and technicians.

Most significantly, MAN B&W has developed the necessary electronics itself, and programmed the engine's integrated control system. Extensive tests have been conducted with systems fitted to its dedicated research engine in Copenhagen. Whereas the retrofitting of the electronic elements to the Bow Cecil's 6L60MC engine left the camshaft in situ, albeit now unused, the 7S50ME-C installation for the Odfjell newbuild has been manufactured and supplied with fully integrated electronics that eliminate the camshaft.

The 500-mm bore size encapsulated by the Odfjell parcel tanker main engine is at the lower end of the application range for the ME technology.

Contracts and preliminary orders for electronic variants include machinery up to the largest two-stroke currently in production.

the 980 mm-bore K98 family, and MAN B&W also advocates the system for an envisioned new generation of containership engines, designed with a record-breaking bore of 1,080-mm.

The seminal 7S50ME-C unit of 10,430-kW (14,200-bhp) was manufactured at the Alpha works, a bastion of the European diesel engineering and integrated propulsion system production in northern Jutland, for supply to Norwegian shipyard Kleven Floro. The recipient parcel tanker is scheduled for handover during the spring of this year.

In essence, the advantages of the ME series arise from the fact that the timing and intensity of fuel oil injection and exhaust valve opening and closing is optimal at all steady and transient loads, making for lower part-load consumption, lower emissions and particularly smoother and improved low-load operation.

The balance between cylinders is easier to adjust for smoother operation, militating in favor of longer TBOs (times between overhaul).

Rather than being reliant on a conventional camshaft. ME engines provide power for fuel injection and exhaust valve lifting by way of a hydraulic oil loop, using fine-filtered oil from the main engine lubricating system at about 200 bar pressure. The microprocessorbased. 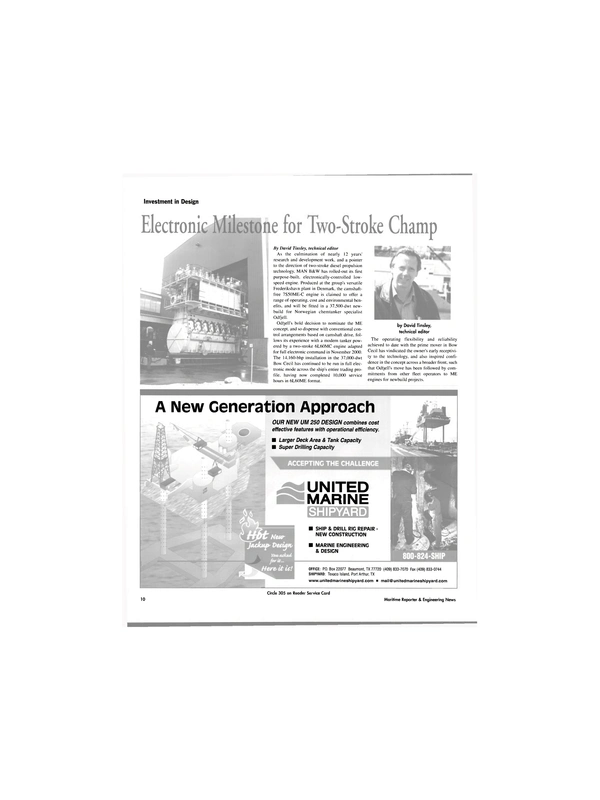