New Era of the Double-Hull Bulker

As an endorsement of a commercially circumspect approach to double-hull bulk carrier design and construction, UK-based Graig Group has generated a tranche of orders for its cost-competitive Diamond ultra-handymax type. Although a letter of intent signed with China Shipbuilding Industry Corp. (CSIC) during the SMM Exhibition in Hamburg last September had put four newbuilds and four options in the frame, recently confirmed transactions open the way to a 16-ship program.

New Century Shipbuilding has been entrusted with four examples of the robust 53,000-dwt Diamond class, and Chengxi Shipyard has been awarded three vessels, and a total of nine options have been taken out at the two yards.

Two of the seven firmly-booked bulkers will be to Graig's account, while Greek interests have taken over a further two Graig orders at New Century. Norwegian principals have booked the trio at Chengxi, via Graig. Prices have not been revealed, although it is understood that the pair destined for Greek control is costing in the region of $18- to $19-million per ship.

This new breed of bulker incorporates five holds, offering a maximum cargo volume of 64,000-cubic meters, plumbed by four 36 ton-capacity, level-luffing deck cranes, and suited to the range of bulk commodities or full shipments of packaged timber, steel products and other goods. The Diamond 53 type is the first product of the joint venture design company set up in Shanghai in 2001 by Cardiff shipowning, shipmanagement and marine services group Graig and Danish naval architecture and marine engineering consultancy Carl Bro. Technical input on structural and regulatory issues has been fed in by Det Norske Veritas, which is also classing the series.

The double-hull configuration and high specification, obtainable at keen prices in the highly motivated Chinese shipbuilding industry, are intended to address IMO and IACS concerns regarding bulk carrier safety, while promising tangible benefits for owners, operators and charterers. Savings for owners and users are claimed to stem from lower capital and operating costs, shorter discharge and cleaning times, and the increased safety and environmental protection afforded by the double-hull design, relative to a traditional bulk carrier structural layout. The double-hull layout results in smooth hold surfaces, free from the conventional, internal side frames, making for easier cargo unloading and hold preparation between cargoes, while creating a strong and robust hull structure. In the interests of longterm integrity, the designers of the Diamond 53 have stipulated an increased mild steel content, and proportionally reduced quantities of high tensile steel, resulting in a higher lightweight relative to equivalent capacity, singleskin handymax vessels. The Graig/Carl Bro joint venture design firm in Shanghai now plans to expand the Diamond range into both the panamax and capesize bulker categories.

The panamax version, the Diamond 75, is imminent, as the subject of a China-based design, finance and build package offering. 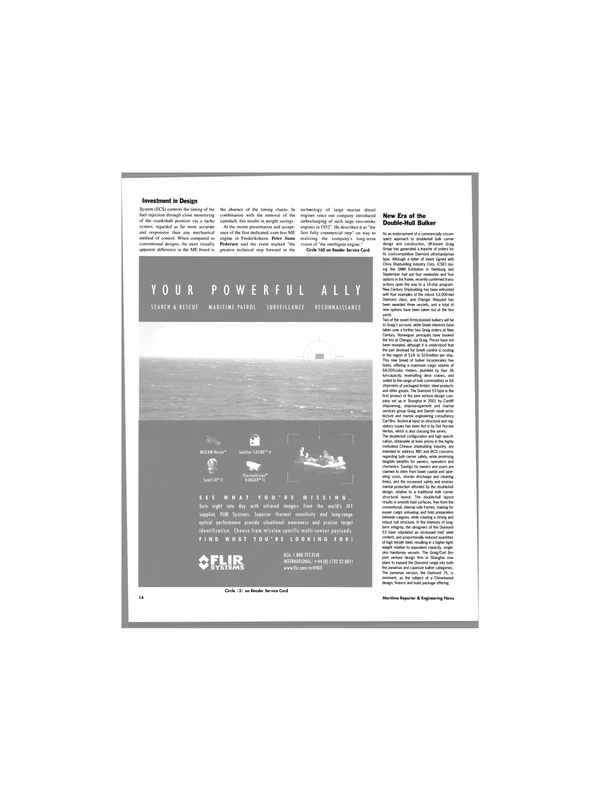