The Sestao Shipyard has launched the newbuilding number 324, a suction dredger with a capacity of 11,300 cu. m.

Known as Filippo Brunelleschi, the vessel will be delivered next September and will go to work in Southeast Asia. This dredger is the first of a series of two, the second one will be launched in April.

These, as well as the previous ships Juan Sebastian de Elcano and Kaishuu, of 16,000 cu. m., will be operated by the same Belgian shipowner, Jan de Nul.

Filippo Brunelleschi and its twin ship are smaller than their predecessors, but are able to dredge to a major depth and are better manageable.

First of a twin vessels contract signed with the Belgium dredger operator. Jan de Nul N.V., Filippo Brunelleschi is a trailing suction hopper dredger with a 11,300 cu. m. hopper capacity, designed and built to perform a variety of functions.

The dredger is equipped with one suction pipe of a 1,200 mm internal diameter, dimensioned for dredging at a depth of 32.5 m (adjustable to 52 and 71 m) under the waterline with the hopper empty, and with a 50 degree or 55 degree, respectively maximum angles between the suction pipe and the baseline.

SB main engine, driving: a Wartsila controllable pitch propeller via a flexible coupling, a Jahnel Kestermann reduction gearbox with clutch coupling; a Nihjuis jet pumpset from the forward end of the engine via reduction gearbox with two outgoing speeds. Between engine and gearbox a flexible coupling, between gearbox and pumpset a tooth coupling are fitted Circle 26 on Reader Service Card 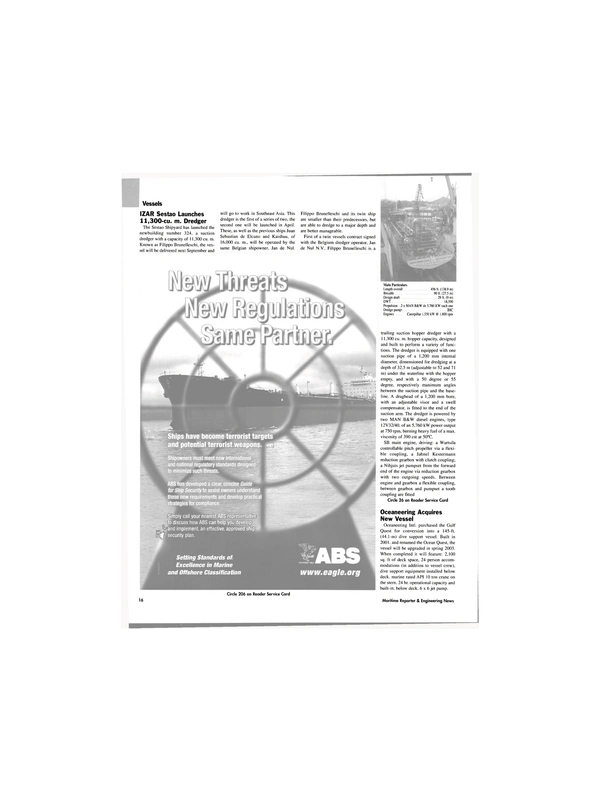