Where is Floating Production Headed?

The number of floating production units grew 5% in 2013. Here we examine the global market and future opportunities.

Growing Number of Floating Production Units
The number of floating production systems has grown at a strong pace over the past decade.  Aside from a tapering off in 2009/10, year to year growth has been in the range of 5-12% during this period.
Ten years ago 203 oil/gas production floaters and no LNG processing units were in service or on order.  Five years ago there were 269 oil/gas units and 6 LNG processing units.  By the beginning of 2013 there were 306 oil/gas production floaters and 20 LNG processing floaters.  Now there are 319 and 24 units respectively.
Overall, the number of units grew 5% during the past year, 69% over the past decade.


Redeployment Prospects for Available FPSOs
Eighteen FPSOs have stopped producing and are available for redeployment.  The latest to join the inventory of idle FPSOs are Kuito and BrasiI, VLCC-size units owned by SBM.  The lease on each concluded at end 2013.  They are to be decommissioned.
Some of the 18 available FPSOs are actively for sale.  Some are being retained for use on another field controlled by the current owner.  All require modification and upgrade to be reused.  Depending on the new field, the cost to modify the processing plant, mooring system and refurbish the unit can easily exceed $100 million.
Ten of the available units are single hull, five are double hull and three have double sides or double bottom.  Single hull unit are less marketable than double hull units.
Details for available FPSOs can be found at www.imastudies.com.
Many of these available FPSOs (particularly single hull units) will not find another field.  This is behind the decision of SBM in December to write down the book value of the FPSO Falcon.  Explaining its decision to take a special charge of $55 million on Falcon (marketed since 2009) and Alba (a tanker acquired in 2009 as a conversion hull), SBM said the “estimated recoverable amount under current market conditions is considerably lower than the carrying value.”
To place the issue in perspective, 24 FPSOs have been redeployed over the past ten years – accounting for ~20% of the FPSO contracts during this time period.  Assuming this redeployment pace continues, more than 7 years will be needed to clear the inventory of FPSOs now looking for a field contract.  And this assumes a project match can be found for all units (which will not happen) and no further units come off field over the next several years (which will happen).
Bottom line is there are far too many available FPSOs for the market to absorb. This situation should cause lenders to look very carefully at residual values in FPSO financings.  Anything more than scrap value may be optimistic, even for FPSOs built on new or young hulls.

Orders in 2013
Orders for 22 production floaters with a total contract value of ~$17 billion were placed in 2013.  The orders include 11 FPSOs, two TLPs, one Spar, one Barge, six FSRUs and one MOPU.  A 12th FPSO (Rosebank) was ordered but the contract was suspended pending review.
Details for orders in 2013 are available at www.imastudies.com.
The market seemed to hit resistance in 2013.  FPSO orders in particular were relatively weak.  Over the past ten years an average of 13.6 FPSOs have been ordered annually.  Only 11 FPSO contracts were placed in 2013.
Resistance seems to be in the supply chain.
Construction costs have been increasing, local content targets have been creating bottlenecks and access to financing has been constrained.  Oil company investment resources also have been shifting to shale oil and gas project development.
We see supply chain resistance and competition for investment resources from shale oil/gas projects continuing over the near term.  Our new five year forecast of production floater orders reflects this – and our forecast of orders between 2014 and 2018 is down significantly as a result.

Backlog of Planned Floater Projects
234 floating production projects are in various stages of planning as of beginning January.  Of these, around 55% involve an FPSO, 15% another type oil/gas production floater, 25% liquefaction or regasification floater and 5% storage/offloading floater.
This large backlog of projects in the planning cycle is further indication that project investment opportunity is not the cause of the recent lethargic order pace.
There are plenty of floater projects at or near the final investment decision stage.  The decision to move to the contracting stage has been slowed by supply chain resistance and better uses of investment resources.

The Author
IMA provides market analysis and strategic planning advice in the marine and offshore sectors. Over 40 years we have performed more than 350 business consulting assignments for 170+ clients in 40+ countries. We have assisted numerous shipbuilders, ship repair yards and manufacturers in forming a a plan of action to penetrate the offshore market.  Our assignments have included advice on acquiring an FPSO contractor, forming an alliance to bid for large FPSO contracts, satisfying local content requirements and targeting unmet requirements through technology development.
Tel: 1 202 333 8501
e: [email protected]
www.imastudies.com 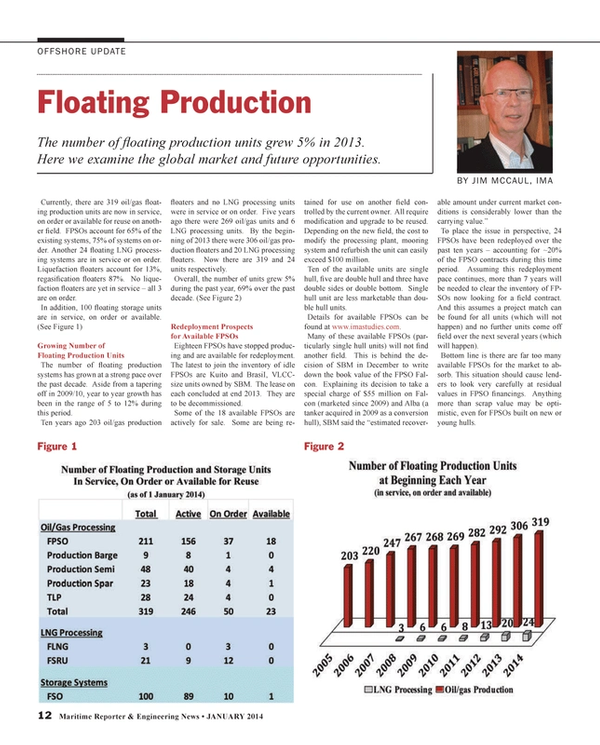 Read Where is Floating Production Headed? in Pdf, Flash or Html5 edition of January 2014 Maritime Reporter