OSV Market: Which Way is Up?

Any analysis of markets for offshore service vessels (OSV) usually begins with analogies to rough weather, best of times/worst of times or similar. OSV expert Seabrokers, with a home base in Stavanger, Norway, in the February edition of its Seabreeze market report follows this convention with a description of the “feast or famine” conditions in the North Sea. Recent day rate action highlights the localized nature of markets for anchor handlers (AHT), platform supply vessels (PSVs) and similar equipment, while also capturing the supply and demand dynamics which breed volatility.

Volatility & Uncertainty
There has been recent upward movements of day rates seen in certain international OSV sectors, the problem is determining if they are temporary spikes or sustained cyclical upturns. In the March market report, the Norwegian intermediary Seabrokers said “… trading conditions turned rapidly, with the market quickly moving in owners’ favor. It became quite common for there to be less than a handful of vessels available on any given day, and this provided owners with an opportunity to increase their rates.”

The capacity utilization numbers tell the story; for large PSVs which it defines as having deck capacities of greater than 900 sq. m. (equivalent to roughly 5,000 dwt), went from a worrisome 58% in January up to a healthy 82% in February. Day rates for these vessels responded in kind, with the broker estimating a jump in hires from $6,800/day in January up to $14,400/day in February.

For perspective, equity analyst James West, who covers the sector at New York based investment bank Evercore ISI, reminded clients that: “… the prior peak in worldwide fleet utilization was nearly 87% in 2013…”

The dynamics which underlie activity in the service segment stem from oil exploration and actual production, both of which are tied to perceptions of future oil prices. Economics 101 applies here, with the anticipation of sustained lower prices, certain projects become uneconomical; OSV owners then put their vessels into “lay-up”. In the last “healthy” market for offshore assets, circa mid-2014, the ratio of OSVs to working rigs was roughly 4.5x – 5.0x. 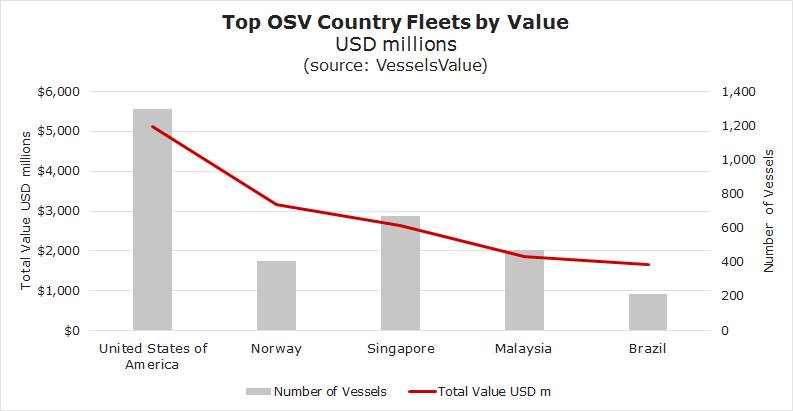 The logistics of “cold stacking”, where systems are disconnected and the asset is basically left to sit for a lengthy period, are where OSV economics become unique compared to other maritime asset classes. As reactivation becomes a lengthy and expensive process, relatively small shifts in demand lead to magnified volatility around a supply side that’s been semi-permanently reduced by cold stacked equipment.

Overall, asset values for international OSVs are weak, having declined since the oil price tumble of 2014/2015, but they failed to turn upward with the price of crude oil. Looking at a notional large anchor handling tug (described as one between 10,000 BHP and 13,000 BHP) the analysts at VesselsValue have presented a data series which looks at the asset price going back to 2014, prior to the major move down in the oil price. The hypothetical 10-year-old vessel (left axis), then priced at $20 million, followed the price of crude oil (right axis) downward . However, as the oil price bounced back upward, the OSV price moved sideways along a floor, mired at around $4 million since early 2017. The analysts pointed to extensive building in China (and a lack of scrapping). VesselsValue has also looked closely at the market for the 21 assets recently sold in the liquidation of Toisa (which entered bankruptcy in early 2017), back-casting the present $276 million valuation to early 2017, when the same fleet would have been worth nearly $400 million.

Disappointing asset prices in the face of volatile day rates are not necessarily a bad thing, enabling the brave to get positioned for the recovery. Seacor Marine Holdings (symbol “SMHI”) noted in a Q3 presentation at an investment conference that it has invested $230 million ahead of a hoped-for market upturn, adding vessels at deep discounts to replacement value, some through “distressed” sales. SMHI also noted that “consolidation has improved the competitive landscape”. SMHI, which refinanced debt in Q4 2018 (picking up some $28.3 million of cash that could be used for acquisitions) has been a consolidator.

In late 2018 and into early 2019, it acquired 14 vessels through a joint venture in the Brazilian market (with savvy financial structuring that saw SMHI putting up only $5 million of its own capital), acquired three Fast Support Vessels from a onetime pool partner, paying with SMHI shares, and, most recently, bought three 2018 built PSVs from a company within the COSCO group. For others, it’s more about cost savings and staying power. Tidewater (“TDW”), restructured after its 2017 bankruptcy filing, and now the world’s largest OSV operator after having acquired Gulfmark International in late 2018, talked about “value creation in a down market… ” through post-merger synergies, in a January conference presentation. SMHI reported average 2018 day rates for its fleet of just above $9,700/day (for those units working) but with a disappointing utilization of around 60%.

A recovery is coming, but its timing, beyond its frequent characterization as “eventual,” is unknown. Research analysts at Clarksons titled a January, 2019 report “Hope Springs Eternal”.

In recent equity research for investors in Hornbeck Offshore (“HOS”), Evercore ISI’s West explained to clients: “The exact timing for a recovery to occur in the offshore vessel space is opaque although a number of indicators point to early 2020 as the inflection point given the increasing pace of activity in our offshore drilling coverage.”

After stressing the impact of the Brent oil price on oil company budgets, pointing to levels around $60 - $65/bbl that would keep E&P budgets intact, West goes on to say: “The offshore transportation market, a second derivative of offshore exploration and development activity has started to improve albeit at a slower pace as a previous oversupply of vessels begins to work itself out via attrition and market consolidation.”

TDW, in its presentation, and referring to the OSVs / working rigs, suggested that “…the market is likely tighter than it appears…” citing the high probability that vessels stacked for more than three years, or those more than 15 years old, would not return to service.

Markers can be found in the sale of the Toisa asset liquidation, an ongoing liquidation sale of nearly two dozen vessels trading internationally, primarily anchor handlers and PSV. Analytical work by the VesselsValue analysts noted: “… 21 assets were sold during the 12 month period, totaling almost $220 million in one of the largest court auctions of any offshore owner in recent history … VesselsValue prices the market value of the assets today at $276 million, however it is important to note that many vessels were sold in layup condition out of class and in need of reactivation.”

At a high level, this analysis suggests that $2.66 million, on average, would have been required to reactivate each vessel to trading readiness.
Hornbeck Offshore, along with well-known owners including Harvey Gulf International Marine and Edison Chouest, also participate in the Jones Act market, where the constrained supply dynamics for PSVs lead to a slightly different volatility contour. The big picture, much like the international arena where assets can move around, is one of an oversupplied market. For Hornbeck, its 2018 results show that its “new generation” OSVs averaged $19,150/day when working, adjusted for the poor utilization (24 units working out of 64 vessel fleet), the effective day rate falls to $5,036/day. 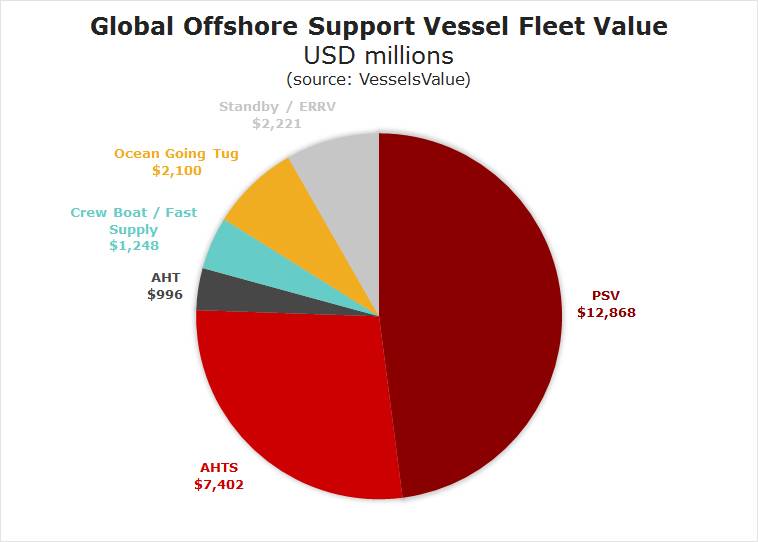 Source: VesselsValueRigs & Boats
Demand for service vessels in the U.S. Gulf of Mexico stems from working rigs. In theory, the deepwater rigs presently working would give rise to demand for roughly 100 OSVs to serve them, far less than the overall availability. Baker Hughes, which provides monthly updates on the rig count, showed 22 floating rigs (drillships and semi-submersibles) working offshore in early March, 2019- little changed from levels of September/October 2018 (but up from the 17 logged at the beginning of 2018). Unstacking boats requires a judgement that upticks in day rates (and boats working) are not merely temporary spikes, and, importantly, a commitment for owners to pay for drydock costs.

Matthew M Rigdon, Executive Vice President and Chief Operating Officer of OSV owner Jackson Offshore Operators, discussing deepwater OSVs, told Maritime Reporter & Engineering News: “Supply is tightening, as I suspected at the time of a presentation I gave in late November 2018, due to the large number of dry-dock requirements coming due in 2019. There is little spot availability and our competitors are not willing to offer vessels for short term requirements. They are requiring longer term commitments from charterers to even offer the few vessels that are immediately available. This has resulted in rate support into the $20,000 / day range. Rates will need to get into the mid $20,000/day range to allow vessel operators to break even and recover dry-dock costs.”

Todd Hornbeck, in his company’s mid-February 2019 investor call (reviewing 2018 Q4 results) offered a similar sentiment, hoping that OSV operators take the longer-term view before re-activating equipment. He told investors, “Financial discipline and attention to ROIC over the long haul necessitates that as we unstack vessels, we do so in such a way that the cost of unstacking, i.e. drydocking, recrewing, training, resupplying the vessel is contractually covered or otherwise strategically justified….We see no logical reason to unstack a vessel for a contract that cannibalizes the value of not only that vessel, but the other vessels we have deployed in a given market.”

In late 2014, the Baker Hughes data shows 57 deepwater rigs working, more than double the present number, which, in retrospect provides a benchmark for full OSV utilization. In its end-2018 Form 10-K (including its annual report to investors), HOS estimated that 80 U.S. flag OSVs were cold-stacked.

A GOM turnaround is not without its challenges.

At the end of 2018, analysts at leading energy consultants Wood Mackenzie had turned positive, provided that the oil majors moved forward with some mega-projects. Though production costs in the GOM have come down, economic prospects continue to be uncertain, so Final Investment Decisions are far from a sure thing. Wood Mackenzie’s senior research analyst, William Turner, said: “We expect 2019 to be a strong year for the Gulf of Mexico. In addition to exciting new project sanctions, which could usher in more than $10 billion of investment into the region, a couple of historic firsts set to occur next year could set the stage for years to come.” They said that: “Shell and Chevron will lead the way, but the actual growth in exploration will come from new entrants – Kosmos Energy, Equinor, Total, Murphy and Fieldwood.” But the majors’ eyes are also looking to the west, on the landside, specifically to the Permian Basin, where both Chevron and Exxon both plan to ratchet up oil production dramatically in the next few years. As Permian pipeline connections to the Gulf Coast open up, the majors looking at the big offshore projects may pause before pulling the trigger on big offshore commitments. 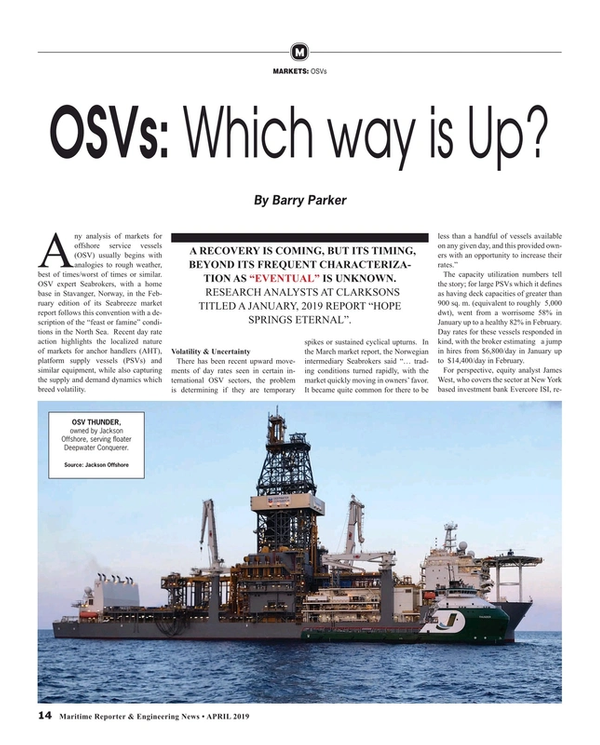 Read OSV Market: Which Way is Up? in Pdf, Flash or Html5 edition of April 2019 Maritime Reporter