Marine Autonomy Put to the Test

Global activity on the subject of unmanned vessels is gathering momentum as we read almost weekly of new developments in this field.
In March, on the North Sea off the Netherlands coast, an autonomous navigation system supplied by Robosys Automation underwent a two day sea trial choreographed by the marine institute MARIN, under the auspices of a Netherlands Maritime Technology Joint Industries Project. The live test on board the 26m Damen Fast Crew Supply Vessel SeaZip3, used two other ships, to test and verify collision avoidance and COLREGS compliance. The two other collision avoidance target ships, were Octans, a 30m Research Vessel and Guardian, a 66m Anchor Handling Tug Supply.

Two months previously, the autonomous system was successfully tested against 11 potential collision scenarios on MARIN’s ship simulator: the safe behavior of the software for the same scenarios would then be trialed live on the North Sea.
The tests covered head-on, crossing, failing to give way and overtaking situations with the second target vessel adding complications e.g. by “crowding” the test area. At all times the SeaZip reacted to the scenarios in a safe manner, although more time would allow better “tuning” of the system for optimum performance.

Looking at the subject of autonomous shipping. What are the limiting factors holding back the acceptance/availability of autonomous vessels? Once a vessel is clear of port and on the high seas can the destination track be set and the vessel left alone until it nears its destination? Of course not, but why not? There must be a navigation system that will avoid all static and dynamic hazards, preferably a weather input to avoid storms and take into account currents and tidal factors. Then there needs to be observation of COLREGS and the Law of the Sea. Although much of the navigational data can by preprogrammed, updates can be fed during a voyage using RF or satellite, the major assumption being that there are no other vessels in the area. But what if there are? It’s not just a question of sticking a video camera on the bridge, that isn’t sufficient!

Assuming a perfect Collision Avoidance System is available, are the other systems of the vessel offering 100% reliability? Last month we saw the Norwegian cruise ship Viking Sky drifting near the shore when her four engines suddenly stopped. We are expecting CAS to behave perfectly yet it can only do so if the vessel’s propulsion and autopilot systems offer the same reliability. If autonomous ships are to become more common, the existing systems must improve their reliability.

Commercial vessels and many recreational vessels are equipped with AIS. This is a very useful navigational aid and allows the details of other vessels in the vicinity to be plotted. Together with ARPA these tools go far in offering a solution to the dangers of collision at sea. However as with many things, “garbage-in” equates to “garbage-out,” in other words when the AIS is transmitting false information, the alarms built into the bridge systems will not work and can mislead to such an extent that a collision can occur. Procedures must be introduced to ensure AIS is not generating misleading information. For smaller vessels overall safety would increase if AIS was required for these vessels. 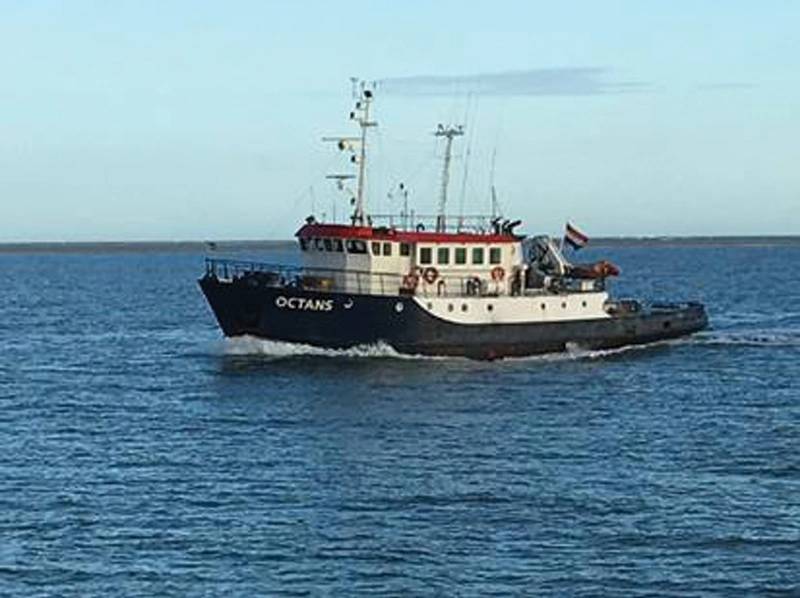 In congested waters, a VTS (Vessel Traffic System) is often the solution, acting as an ATC (Air Traffic Control) on the water.  While VTS is a major, if not essential way to reduce accidents, it still relies on the human element and humans do make mistakes. The aero industry has had it’s fair share of accidents and to prevent mid-air collisions, their TCAS has been standardised and improved with great effect.
TCAS (Traffic Collision Avoidance System) is a stand alone situation awareness system that sets off an alarm when there is a danger of collision and more importantly instructs both aircraft what manoeuvre to make to avoid the collision. The instruction is paramount and (temporarily) overrules any ATC instructions. It is self contained and operates worldwide.  It introduces the novel concept of machines talking to each other……… a concept that we will see more and more on land and sea with the increasing introduction of unmanned systems.

An important advantage ships have over aircraft, is that their radar can see and track other vessels (ARPA) while aircraft cannot. Ship speeds are relatively slow, so hazardous situations (usually) develop slowly. Intership and VTS communications are usually by voice over VHF, offering opportunities for misunderstandings due to language pro/de-ficiencies, accents, dialects etc.

The establishment of communications to be available direct to ships in the area, in an electronic format that can be inputted to the ship’s navigation systems would be a major improvement and would be of immediate use by CAS whether on manned or unmanned vessels. A global standard is needed so shore & ship can interact with each other, otherwise there is the danger that a plethora of incompatible proprietary formats will develop.
The COLREGS compliant Collision Avoidance Systems developed for autonomous navigation systems such as offered by Robosys, can also serve as a “navigation aid” for manned vessels, providing not only a collision warning alarm but suggesting a safe heading correction to avoid the collision. Fortunately on a ship things do not move as fast as in aircraft, so it could be setup so that after the collision alarm is sounded, if not cancelled or an avoiding action not detected, after for example a 60 secs delay, the CAS would instigate avoiding action automatically. A suitable AIS text and/or voice message could be transmitted on VHF to warn other vessels.

Present rules and regulations were designed for manned vessels, so inevitably some rules will need changing. Who is the master of the vessel, is he on board by telepresence, in other word he is elsewhere but in command by radio link? And if the link is lost and the vessel sailing fully autonomously with the onboard computer(s) driving the ship? Ultimately who is responsible? As with the recent Boeing 737 Max crashes, is it the pilot for not (knowing how to) switching off the erronous software, or Boeing, or the software designer, or the airline? This is a legal area that will have to be thought through as more systems and ultimately the whole vessel is unmanned. The first unmanned vessels are with us and will multiply. It offers great improvements in safety, efficiency and convenience and will open up many new possibilities that are yet to be discovered. 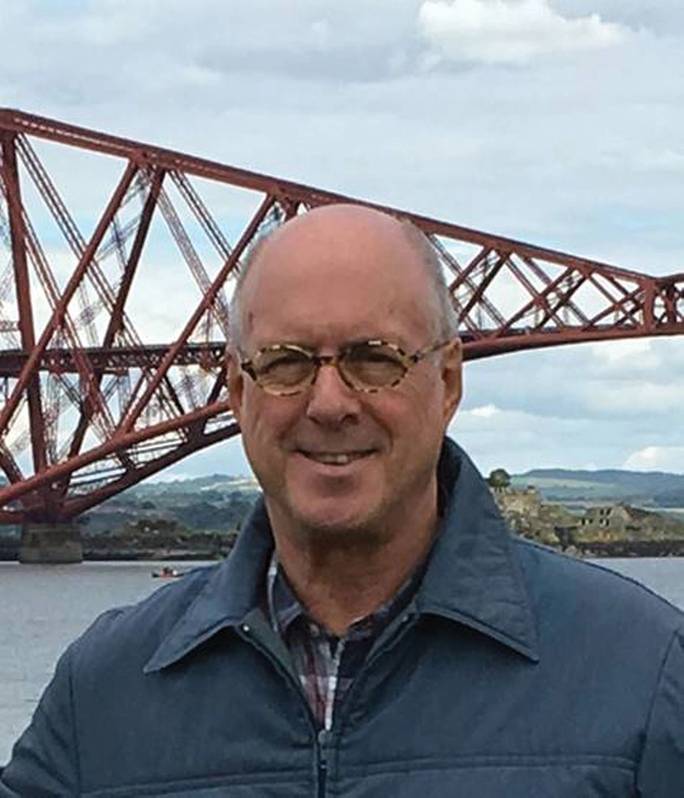 Keith Henderson has been a contributor to MR publications for a number of years. Since 2001, he has been active in the Unmanned Surface Vessel business and is currently a Manager at Robosys Automation. 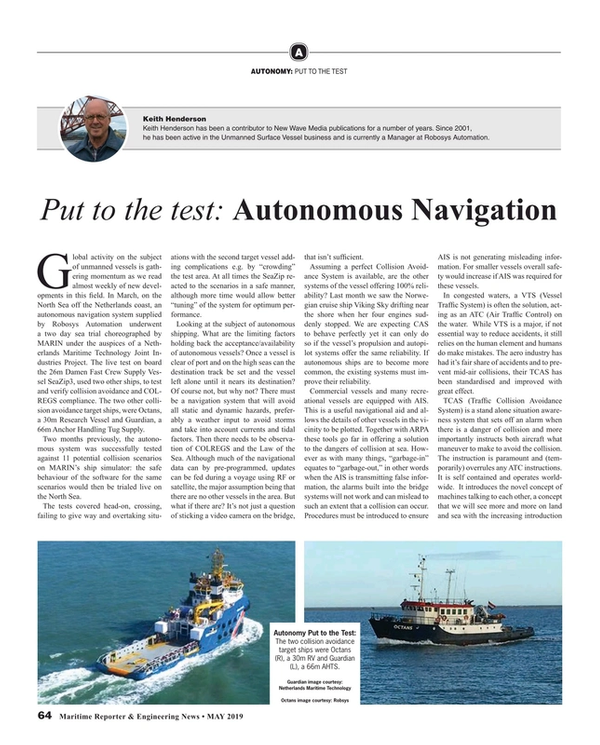 Read Marine Autonomy Put to the Test in Pdf, Flash or Html5 edition of May 2019 Maritime Reporter