While nothing lasts forever, the cruise industry – and particularly the ‘expedition’ cruise sector – remain on a historic run with no indication of a near-term slowdown.

The leisure travel sector, of which expedition cruising is a part, offers numerous possibilities for delivering new “experiences” unlike industrial shipping businesses (or even conventional ferry and passenger transport), which can only grow as fast as the demand in a particular sector.

Though there is no precise definition of “expedition”, the ships are smaller than mainstream cruise ships, usually carrying less than 300 passengers, and the destinations are well off the beaten path, more exclusive and generally devoid of the traveling masses.

The influential Virtuoso Luxe Report identifies ongoing industry trends and for 2019 it notes that luxury travel, generally, will be “…highly personalized and inspired by a desire to experience new destinations in unusual ways.”

Expedition cruising is at the leading edge of this trend.

Much of the attention goes towards the high-end marketplace (where well-heeled travelers may endure harsh conditions, or not, but always with creature comforts), though, technically, “Expedition” is not synonymous with “Luxury”.  The fleets may be found within larger corporate structures, or may be operated through brands focused specifically on the sector.  From a vessel design perspective, maneuverability and the ability to navigate in special conditions are paramount. The design of the ship is always linked to the passenger experience and the destination’s parameters.

Because the destinations, are often environmentally sensitive, building sustainability into vessels is crucial. Attention to sustainability also plays well with branding and brings marketing appeal to higher end audiences.

Celebrity Cruises, part of the Royal Caribbean family, made a commitment to the sector early on with its 2,842 gt Celebrity Xpedition (built 2001 at Cassens in Emden, Germany, acquired by Celebrity in 2004, and refurbished in 2018).  Described variously as a luxury yacht, the 2001 built vessel has operated on itineraries serving the Galapagos Islands.

Celebrity has recently put its Celebrity Flora, 5,739 gt, newly delivered from Rotterdam’s De Hoop yard, into a year-round Galapagos Island service.  Patrick Janssens, CEO of De Hoop, told Maritime Reporter: “We are active in the expedition marketplace for several years now. For us it was a logical step after the experience with the more complex offshore vessels and other vessels for more specialized and extreme environments and building many smaller cruise vessels (up to 200 passengers) for years, in an expedition ship those two disciplines are combined. Also the size of our yard and its facilities and organization is very suitable for this type of vessel. We are fortunate to have various requests now coming in and happy we have the possibility to build such special vessels.”

Illustrative of the “built for purpose” nature of the expedition ships, Celebrity says: “…This is the first ship of its kind to ever be designed and built specifically with the destination in mind.”

Most noteworthy is the vessel’s deployment of Dynamic Positioning System instead of anchoring, with aim of protecting sensitive corals and rock formations. Janssens pointed to the yards experience with other vessel types: “De Hoop has many years of experience with DP vessels, we have been building them since the early eighties. The DP system is similar as the ones used in the offshore sector, where there are high demands (close to oilrigs, etc.). We have a DP system with Navis this time.”

To propel the vessel, the builders selected Steerprop, based in Rauma, to provide two contra-rotating propulsors (CRPs), each 1450kW. Jussi Tarvairen, Steerprop’s Sales Manager, said: “Expedition cruise vessels like Celebrity Flora are a growing segment, and our propulsion technology and special expertise are perfect for sensitive environments and ice classes.” 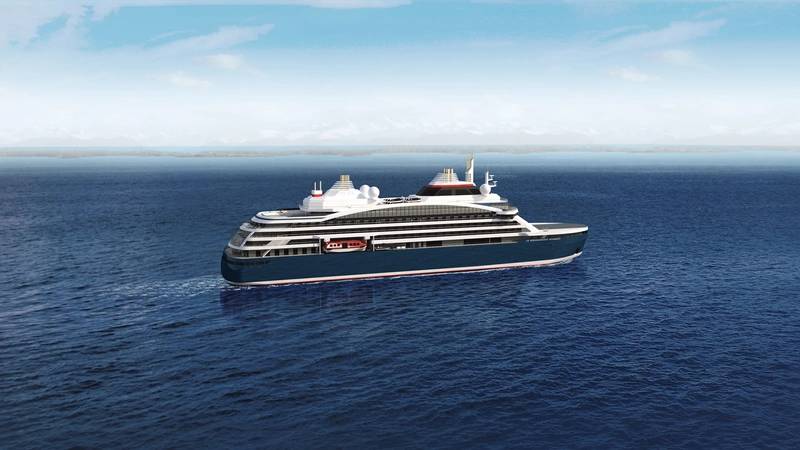 He stressed the importance of the propulsors’ hydrodynamic qualities with a specially engineered underwater body, and added that: “Noise levels and vibrations are extremely low, which was vital for this particular vessel. In addition, CRP provides outstanding maneuverability with its advanced azimuth propulsor design and excellent efficiency.” All of these features are critical for “operating in strictly regulated marine environments.”
Celebrity Cruise, in a release, notes: “Combined with a zero-speed stabilizer system, the DP system will choose a heading to minimize the roll and heave motions on the vessel, significantly improving passenger comfort. To achieve a high level of redundancy and to meet the Class requirements (PSMR* and DP1 / DP-AM notation), the power and propulsion plant of Celebrity Flora is duplicated and housed in two separate engine rooms.”

The vessel has Steerprop azimuth thrusters and SKF zero-speed stabilizers. Two 400kW bow thrusters are provided by Veth from the Netherlands.
De Hoop explains that: “The power supply for two (CRPs), two bow thrusters and other consumers, is supplied by four Caterpillar C32 diesel generator sets,” with Janssens telling Maritime Reporter that overall efficiency is enhanced because: “…we have optimized various items, hull shape, propeller design, new bow and efficiency of the whole propulsion train…”. The diesel engines are fitted with SCR for nitrogen reduction, achieving IMO Tier III.

The De Hoop yard, which has built vessels for river cruising, as well as OSVs, is building another small vessel for the Galapagos to be delivered next year to boutique operator Silversea (also part of Royal Caribbean) already operating its Silver Galapagos - built 2012.  The newbuild, Silver Origin, is also designed for 100 passengers (a statutory limitation for operation in the in the region). Janssens, from De Hoop said the importance of lessons learned, as it continues its foray into building for the expedition sector. “The cooperation and collaboration remains key in such projects. Communication is facilitated better also supported with IT. Also, we have made further steps in production efficiency and also we are now more able to integrate the various disciplines into the build of the vessel’s sections and hull. The challenging part remains the outfitting and interior and exterior finishing, as there many wishes and demands have to be integrated with the technical vessel. We have increased our organization in this part, we have a dedicated general manager interior and exterior and a dedicated design office in which the teams work together to translate the wishes of the client and their designers (on-site) into the vessel.”

Out in the Cold
Cold weather destinations are a major province of expedition vessels.  Stalwarts such as Lindblad National Geographic have journeyed into frigid waters with vessels described as ice strengthened. For example National Geographic’s Explorer (DNV Ice IA on the vessel’s forward hull, approximately equivalent to PC7) originally built for Hurtigruten in 1982, as Midnatsol. Hurtigruten is now deploying its hybrid powered 530 passenger Roald Amundsen, with initial itineraries along the Norwegian coast.

But now, there have been recent strides as ship operators are building vessels for transits in actual ice. The first PC6 vessel, allowed to operate during summer/autumn in first year ice, will be Crystal Cruises Crystal Endeavor (20,000 gt), to be delivered in summer 2020 from the Stralsund yard, a sister company to Crystal (under the Genting umbrella), for itineraries that will include the Arctic (via the Northeast Passage) and the Antarctic (Ross Sea). The design concept for the vessel came from Foreship, a naval architect well known to cruise operators.

Ponant is privately owned, with its largest shareholder being the Pinault family (an important name in French luxury brands); previously the family behind container shipping behemoth CMA – CGM held a large stake. With a dozen vessels (including the newbuild Le Commandant-Charcot, named for a French explorer) with up to 132 staterooms, its destinations include the Mediterranean and Europe, but also the Antarctic, Greenland, Iceland and Alaska (via the Northwest passage). The newbuild vessel to be built to stringent PC2 standard (year-round operation in moderate multi-year ice), set for delivery in 2021 from Vard’s Tulcea yard, will initially explore the Antarctic, with an intention to explore the North Pole, in the future. Ponant stresses the “hybrid” vessel’s sustainability, with reduced emissions because of LNG propulsion and zero emissions when using battery power.

Ulstein Verft, in western Norway, is now building Endurance, classed as PC 5, for National Geographic. Delivery of the vessel, with the “X Bow” (familiar from the OSV trades in harsh environments), is set for 2020.

Tonje Øyehaug Ruud, from the Ulsteinvik-based yard, said to Maritime Reporter that “our initial idea entering into the market with expedition cruise vessels was that the ULSTEIN X-BOW, designed, built and tested on many offshore vessel operation in areas with extreme weather, was very suitable for passenger vessels intended to cross areas like the Drake Passage and the Norwegian Sea due to the reduced motions an accelerations given by this hull shape leading to increased comfort and safety. The Ulstein X-BOW has also an advantage in cold areas due to the fact that spray from the bow is reduced and by that the risk of icing is reduced.”

The yard explained the power arrangements to Maritime Reporter, saying: “The vessel is equipped with four main engines from General Electric, each connected to a generator from ABB.  Each engine room has an installation of one engine of 3,150 kW and one of 2,250 kW. The main propulsion is provided by 2 azipods from ABB each with a capacity of 3,500 kW and strengthened according to DNV-GL class notation PC(5) requirements. The vessel boasts two tunnel thrusters (on the bow) from Brunvoll for redundancy purposes during berthing. Each of the thrusters has a diameter of 2000 mm and a rating of 1000 kW.”

Ruud noted that the ABB azipods provide a great deal of maneuverability, eliminating the need for stern thruster, adding that: “The vessel is equipped with two stabilizers, one on each side, from SKF. The stabilizers can be used both during transit and at zero speed.”
She said “The vessel is equipped with a “DP light” system compared to the most advanced offshore vessel. A joystick system, providing virtual anchoring functionality allowing automatic course station keeping, is installed.”

Silversea, the RCCL brand, also brings travelers to the Antarctic  and other regions requiring ability to navigate in ice, on its Silver Cloud. The 2017 refurbishment, undertaken at Palumbo yard (in Malta), brought the vessel up to the elevated Polar Code standards where vessels must be configured for their intended service. The hull of the 1994 built vessel (the original vessel in the Silversea fleet) needed to be ice strengthened with additional plating, and a bulbous bow was installed.
Seabourn, a luxury offering in the Carnival family, is building two Expedition style vessels, with PC6 designation, for voyaging in ice-bound waters.

Seabourn Venture, under construction at the T. Mariotti yard, in Genoa, is scheduled to launch in June 2021, with the  sister ship, so far un-named. set to launch a year later.

In design of Expedition vessel, redundancy is key. Ruud, from Ulstein, comments that: Two GE engines are installed in each of two engine rooms for redundancy purposes, and according to Safe Return to Port requirements. Other design tweaks are also needed. Capacity for fuel, water and storage of provisions must consider the logistics of voyages far from readily available replenishment. HVAC design must consider the extreme cold (or heat, for tropical itineraries). Access to varied watercraft that passengers (usually accompanied by specialized naturalist guides) can board for close-up exploration is an important design consideration. Celebrity Flora, borrowing a page from megayacht design, employs “Novurania” yacht tenders that are deployed from a platform accessible by a staircase at the vessel stern. The Seabourn vessels, still under construction, will utilize shell doors at the waterline to provide access to Zodiac rafts.  Silver Cloud’s refit also included special loading platforms, cranes and floats for Zodiac rafts used by passengers, a feature throughout the sector. But, as the expedition bar is raised- with travels to new depths- there is a new consideration; the two Seabourn newbuilds and Crystal Endeavor will be providing special access for mini submarines, as the operators provide yet more in the way of new experiences. 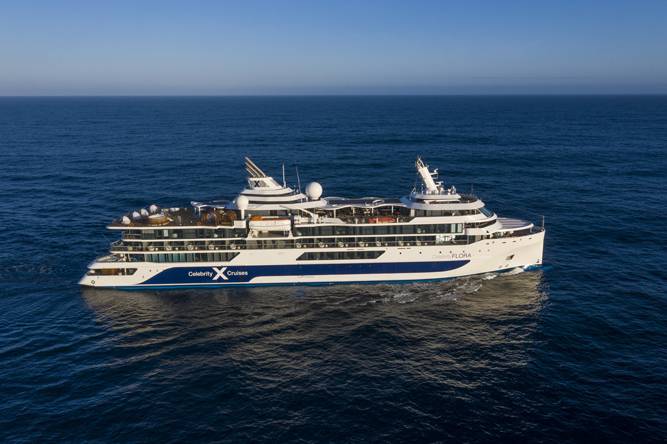 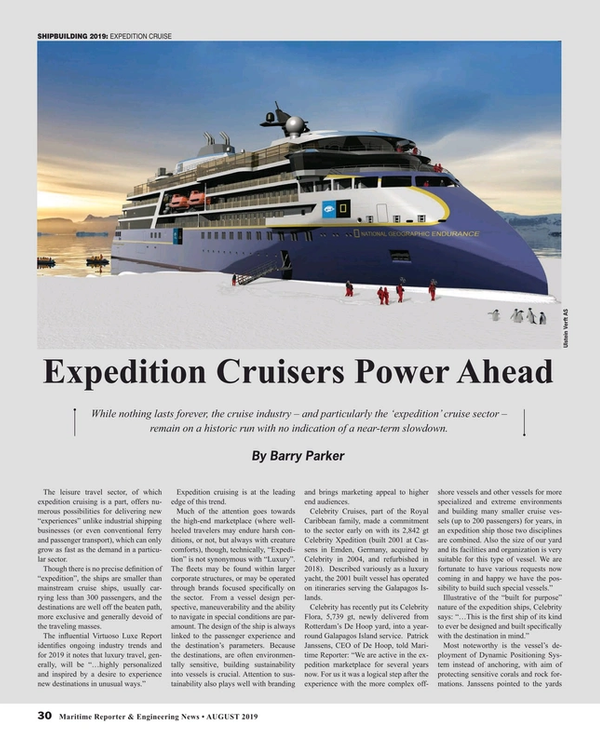