As maritime digests a number of historical changes, Norway’s Fjellstrand shipyard wants to put aside the rule book and look at the whole process in a new way, reducing engineering costs up to 70% and production costs up to 20%.

The process of designing and building a ship, even in today’s highly standardized mass manufacturing environment, remains largely a one-off, one-of-a-kind design and build. Ships are most often built to a shipowner’s or operator’s specific requirements, which are often based on fixed parameters such as speed, fuel consumption, route and cargo or passenger capacity.

Blueprints are created, detailed plans are approved by a classification society, financing is secured and building is started, block by unique block.
Fjellstrand is part of the EU-funded Transport: Advanced and Modular (TrAM) Project, which is coordinated by Rogaland County Council through its transport company Kolumbus. The $13.2m project initiated by industry cluster NCE Maritime CleanTech aims to build what would become the fastest battery-powered, zero emission, high-speed aluminum ferry, building on a growing level of zero-emission competence in Europe while at the same time reevaluating the actual design and build process.

The Modular Approach
Taking “the airline approach” is a mantra heard in maritime circles often, globally, as the airline industry is seen as the de facto “standard in standardization” in many regards. So, what if shipbuilding could emulate some of the advances seen in airline construction or even car manufacturing? What if the modular approach, where core components or central frames that are constant across a range of models while other variable components or systems can be selected depending on changing demands? 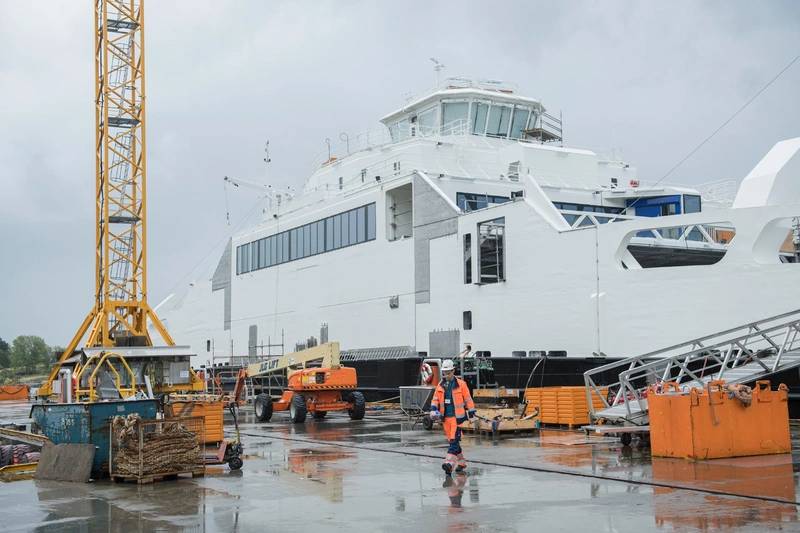 As much as the TrAM project is about building a high-speed clean ferry, it is also about building a process template that can then be copied for other vessels. The project will develop three distinct uses for a zero-emission aluminum ferry: one for European inland waterways another for a London city Thames commuter ferry and the first vessel, to be built to serve a community near Stavanger from 2022.

All three have different speed, depth, passenger capacity and range and noise requirements, but all three have identical design features.  A shipyard might elect to go through the same traditional design process for all three ferries, but what if the only things that were changed in the design systems arrangements of the vessels, were those that needed to be changed?

Nearly all modern vessels are designed with their operation in mind said Dr. Christoph Jürgenhake, group manager at German Fraunhofer Institute for Mechatronic System Design IEM, one of the TRaM consortium members. Fraunhofer IEM is an application-oriented research organization. Its focus is on how objects and systems, including manufacturing processes, work … and work better. Its staff, with experience in aviation and car production, can look at the top-level requirements of a vessel, or car, and then how different building process parameters can be impacted. In TrAM Fraunhofer IEM is taking the lead in assessing how engineering planning and construction methodologies can be improved to reduce costs and time. This is the crux of this part of the project: To determine how to create a modular approach to shipbuilding that create significant savings by enabling engineering and production to be replicable and modular.

Dr. Jürgenhake said that project’s objective is to find the key part of the design that is common to all these three possible designs and then build modules up for there. By borrowing this approach from car and airline makers, the aim is to have set of designs that can still be tailored for operational needs. For example, he notes that VW uses a central module in the chassis around which many different models can be built. “It is a new way of thinking for shipowners and operators. They need to look at the total lifecycle cost when looking at the system design options,” said Dr. Jürgenhake.

While the TrAM Project has yet to find an ideal design, initial sketches suggest a twin hull catamaran.

For Fjellstrand shipyard, this modular approach could help them in a challenging shipbuilding market where reducing costs remains a priority.  “Of course, there is the reduction of labor cost if any of the processes might be automated but this modular approach to design might also lead to more efficient use of materials,” said Fjellstrand’s head of research and development, Edmund Tolo. “We see that several car types are built on the same platform and see that there is a benefit in the cost within that industry. We have no reason to believe that this should not be the case also within the maritime industry.”

If so, then other partners in the project, such as aluminum firm Hydro Extrusions, or Leirvik, a company focusing on superstructures, could create a standard module that could be used on different vessel designs, such as a deep-water high-speed ferry, or a shallow draft, slow speed, rapid turnaround vessel with larger passenger capacity. The project partners recognize that by revaluating the process of designing and building a vessel engineering costs can be cut by up to 70%, and production costs by 20%. 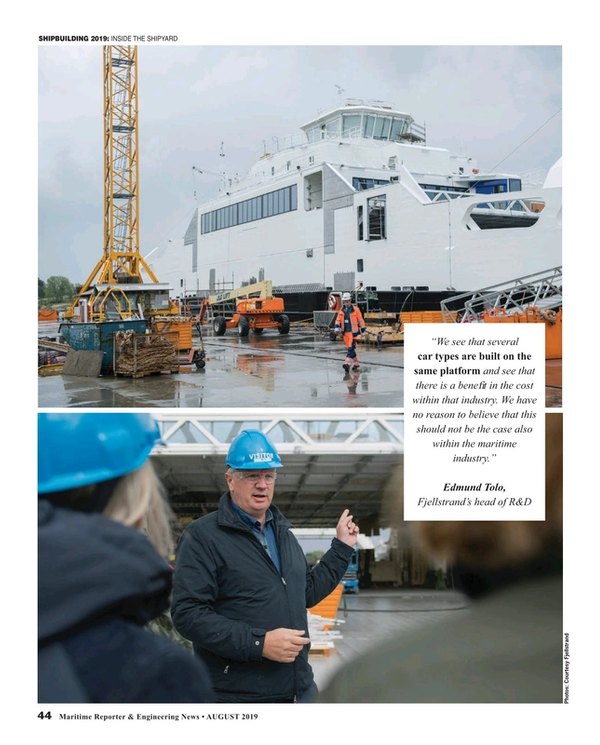